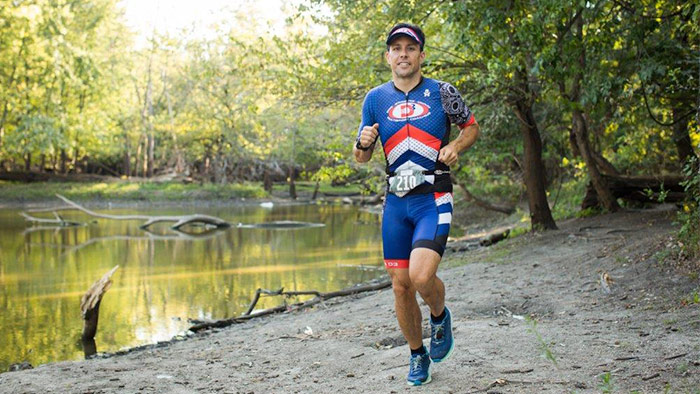 TrainingPeaks Success Story: How Age Grouper David Donoghue Reached His 70.3 Goals by Working With A Coach

Age-group triathlete David Donoghue’s coach Mike Ricci recounts how they achieved success by dialing in David’s swim and run and slowly improving his bike FTP over a few seasons.

As a coach it’s always a great feeling to see one of your athletes not only reach their initial goal, but come back year after year with more advanced performance goals. To see your athletes grow as competitors and reach new heights is always a great indication that—as a coach—you’re doing something right.

One of my athletes, Dave Donoghue, is a good example of this. After working with him briefly during his first few years in the sport, he reached out to me simply looking to return to the sport of triathlon (and improve his health) after taking time off to start a family and grow his career.

Over the next few years we dialed-in his fitness, and from there we were able to work together to reach more competitve racing and training goals. I think Dave’s story is a good indicator of what it takes for an age-group athlete to succeed: It’s not about natural talent so much as a strong work ethic, the willingness to try new things, and the right training plan.

His time ended up at 12:08 (1:10s / 6:15 bike / 4:28 run). That’s a pretty good first IRONMAN and I thought Dave would be well under 11:30 the next year. However,  Dave had other plans. He was starting his legal career, met the girl of his dreams, got married, had three kids and became a successful IP attorney. That’s a pretty good post IRONMAN story right?

After Starting His Family, David Decides It’s Time He Put His Health First

Fast forward to 2013, and Dave contacts me about writing a plan for him for the 2014 triathlon season—for the last 10 years he’s been pretty focused on family and career, and as a result his fitness had hit the backburner. I write a D3 Custom Plan for him and everything goes well.

He’s working on being more fit, not necessarily competitive, and he’s improving here and there. The bigger deal is that Dave is getting healthy again and he loses 50 pounds in the process of training for the 2014 season.

David Reignites His Competitive Side

After a decent comeback season, Dave decided he wanted to get more serious for 2015. He invests in a power meter, he attends one of our D3 Multisport camps, and his results show some nice forward progress.

His swim times are getting back into the range of his high school times and his bike Functional Threshold Power (FTP) is in the 250 range. Of course, as his coach, I want to see more progress, but with Dave’s busy schedule we are keeping him healthy, interested in being fit and moving toward long-term goals. That’s always a win.

Somewhere along the line, he tells me he wants to break 5:15 in an IRONMAN 70.3 and eventually 5:00. I think anything is possible if someone is willing to work for it, but I also know the reality of how busy his life is—three kids, demanding job, and he travels almost weekly.

We continue to work hard through 2016, eventually seeing a big improvement in his swim; he goes from a 1:40 pace to about 1:30. Finally, he realizes he can swim 1:20’s and that gives him a small boost of confidence.

So, I go through all the bike workouts from the prior six months. He has missed maybe one or two in that entire span of time. Let that sink in. four rides per week for 24 weeks—maybe 100 rides. He missed one or two.

Looking at his FTP workouts you can see the gradual, consistent improvement: 250 avg, 270 avg, 280 avg, 304 avg—so yeah, there’s not such thing as an overnight sucess. But there is such a thing as working your ass off to improve your bike FTP over two years. It’s consistency. Redundant, boring workouts. Over and over.

David Hits His Stride on the Run

The last missing piece to David’s success? His run. He’d been averaging about 10:15 pace for a long time. Dave proved to me and himself that he can swim fast. And now he’s got a weapon on the bike with a 300w FTP. I know he has the engine, but his run was holding him back.

We tried running by HR, by pace, and by power. As an engineer by trade, he was and is still very interested in running with power—so that’s where we focus. Still, no great strides were being made. So it was time to try a new tactic.

Then we found the one thing that would get him over the hump with his running pace—mileage. I came up with a plan to build his run up to 50 miles a week. I think this helped in two aspects: 1. He got super fit and 2. His confidence was solid.

His next race of the season was the Toughman in Wisconsin. As the name suggests, it was a tough course. After Santa Rosa I had him race in a few shorter races as part of his Toughman lead up, he did well and podiumed, and he was feeling good about his increasingly solid run off the bike.

After a Change in Run Training, David Reaches his Goal in Time for His Key Race

Heading toward the fall,  Dave and I decide that another run block may give him another boost. We bump his miles up again and he gets over 50 miles and this time he’s running low 9s and sub-9s consistently.

By the end of the season, Dave is gearing up for his key race of the year—IRONMAN 70.3 North Carolina.

He’s ready to roll by race week and confident he can swim, bike and run fast on the same day. His swim went well, somewhere around 27 minutes. The bike is a blur for him, and he rides a 2:26. He gets off the bike and runs well for miles and miles—his mile paces are around 8:45 and he has a few rough miles at 9:00 or 9:10, but he pulls it back to 8:40-ish by the end.

He busted through his goal of 5:15 and came within a few seconds of breaking 5:00! Dave is proof that if you work hard enough for something, you can achieve it. Of course, the very next day he was back home, taking part in kids hockey practices, recitals, and Halloween activities. He’s truly a family guy!

It’s been my pleasure to know Dave for 16 years now, and he has even bigger goals going forward. I look forward to helping Dave meet and exceed those goals in the seasons to come.

Are you ready to commit to your goals in 2018? Find out how TrainingPeaks can help make your racing dreams a reality HERE.

About Mike Ricci
Mike Ricci, USAT Coach of the Year, USAT Level 3 Elite Coach and a Training Peaks Level II Certified Coach.  He is the owner and founder of the D3 Multisport coaching group, through which he coaches all levels of athletes from beginner to elite. One of their key coaching philosophies is no junk miles.  They help athletes utilize their time effectively as they pursue their goals.  Mike’s credentials include the University of Colorado Triathlon Team and guiding them as the Head Coach to four consecutive collegiate National Championship titles from 2010-2013. Mike has written training plans for Team USA several times, was the USAT World Team Coach in 2017, and has helped many athletes to qualify for the Ironman World Championships in Kona. You + D3 = Success (Learn More!).
Visit Mike Ricci's Coach Profile
#INSPIRATION#IRONMAN-70-3#TRIATHLON