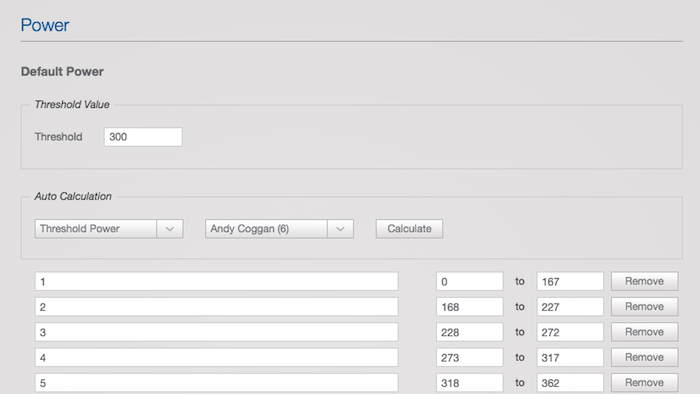 Setting the correct power training zones is critical to improving as a cyclist or triathlete. Dr. Andy Coggan explains the system for setting zones, as well as how to determine your threshold and other variables that factor into training with power.

The power training zones, described below, were developed by drawing upon fundamental principles of exercise physiology as well as approximately two decades of experience with power-based training in both laboratory and field settings. Some of the logic behind the development of this classification scheme is described below.

Basis for System and Number of Zones

Power at lactate threshold (LT) is the most important physiological determinant of endurance cycling performance, since it integrates VO2max, the percentage of VO2max that can be sustained for a given duration, and cycling efficiency. As such, it is more logical to define training zones relative to an athlete’s threshold power, vs., for example, power at VO2max (just as it is more logical to define HR-based training levels relative to threshold HR vs. maximal HR). On the other hand, determining the appropriate number of zones is somewhat arbitrary, since the physiological responses to exercise really fall on a continuum, with one intensity domain simply blending into the next. A compromise must therefore be made between defining more zones, thus better reflecting this fact, and defining fewer zones, for the sake of simplicity. In the present system, seven zones were felt to be the minimum needed to represent the full range of physiological responses and to adequately describe the different types of training required/used to meet the demands of competitive cycling. The table shown below lists the primary physiological adaptations expected to result from training at each zone, although these will obviously be influenced by factors such as the initial fitness of the individual, the duration of each workout, the time taken between each interval effort, etc.

At least in theory, the most precise way of determining an athlete’s power at LT would be to rely on laboratory-based testing with invasive blood sampling. Very few individuals, however, have access to such measurements on a routine basis. Furthermore, while LT is often defined by sports scientists as the initial non-linear increase in lactate with increasing exercise intensity, this intensity tends to be significantly below that which coaches and athletes tend to associate, on the basis of practical experience, with the concept of a “threshold” exercise intensity. Thus, probably the easiest and most direct way of estimating a rider’s functional threshold power is to simply rely on data collected in the field using a power meter.

Relating or translating the specified power levels to corresponding heart rate (HR) ranges or zones is somewhat difficult, due to the inherent variability of HR as well as individual differences in the power-HR relationship (even when referenced to threshold power). Nonetheless, approximate HR guidelines have been provided in Table 1, such that they can be used along with power to help guide training if desired.

The values given are from Borg’s 10 point category-ratio scale, shown below, not the original 20 point scale that is more commonly used. The category-ratio scale is used because it explicitly recognizes the non-linear response of many physiological variables (e.g., blood and muscle lactate), and thus provides a better indicator of overall effort. Since perceived exertion increases over time even at a constant exercise intensity (power), the suggested values or ranges refer to perceived effort as determined relatively early in a training session/series of intervals.

While the system is based on the average power during a workout or interval effort, consideration must also be given to the distribution of power. For example, average power during mass start races typically falls within zone 3, but races are often more stressful than training at zone 3, due to the greater variability (and therefore higher peaks) in power. Similarly, due to soft-pedaling/coasting, the same average power achieved during a hilly ride or group training session will not reflect the same stress as the same average power achieved during a completely flat ride or solo workout. In part, the variability in power is taken into account in defining the various zones, especially zones 2 and 3 (training at the higher zones will tend to be much more structured, thus limiting variations in power). Furthermore, there is obviously an inverse relationship between power output and the duration that power can be sustained. Thus, it is axiomatic that power during shorter training sessions or efforts will fall towards the higher end of a given range, whereas power during longer sessions or efforts will fall towards the lower end of a given range. Nonetheless, a workout consisting of, for example, 30 min of cycling at zone 1 (as warm-up), 60 min of cycling at zone 3, and another 30 min of cycling at zone 1 (as warm down) would best be described as a tempo training session, even though the overall average power might fall within zone 2.

To learn more about training with power, download TrainingPeaks’ Free How To Train With Power eBook.

About Dr. Andrew Coggan, Ph.D.
Andrew R. Coggan, Ph.D., is an internationally recognized exercise physiologist. He has published numerous scientific articles on the physiological responses and adaptations to acute and chronic exercise in healthy untrained individuals, athletes, the elderly, and various patient populations. A former national-caliber masters cyclist and TT record holder, Dr. Coggan is also widely recognized as one of the leading experts on the use of power meters. He is the originator of numerous concepts/algorithms for analyzing the data that such devices provide, including normalized power, TSS, power profiling, quadrant analysis, the Performance Manager, the WKO4 power-duration model, auto-phenotyping, and unique pedaling metrics. In 2006, he was honored for these applied sports science efforts with USA Cycling's Sport Science Award and by being named as one of three Finalists for the US Olympic Committee's Doc Councilman Award.