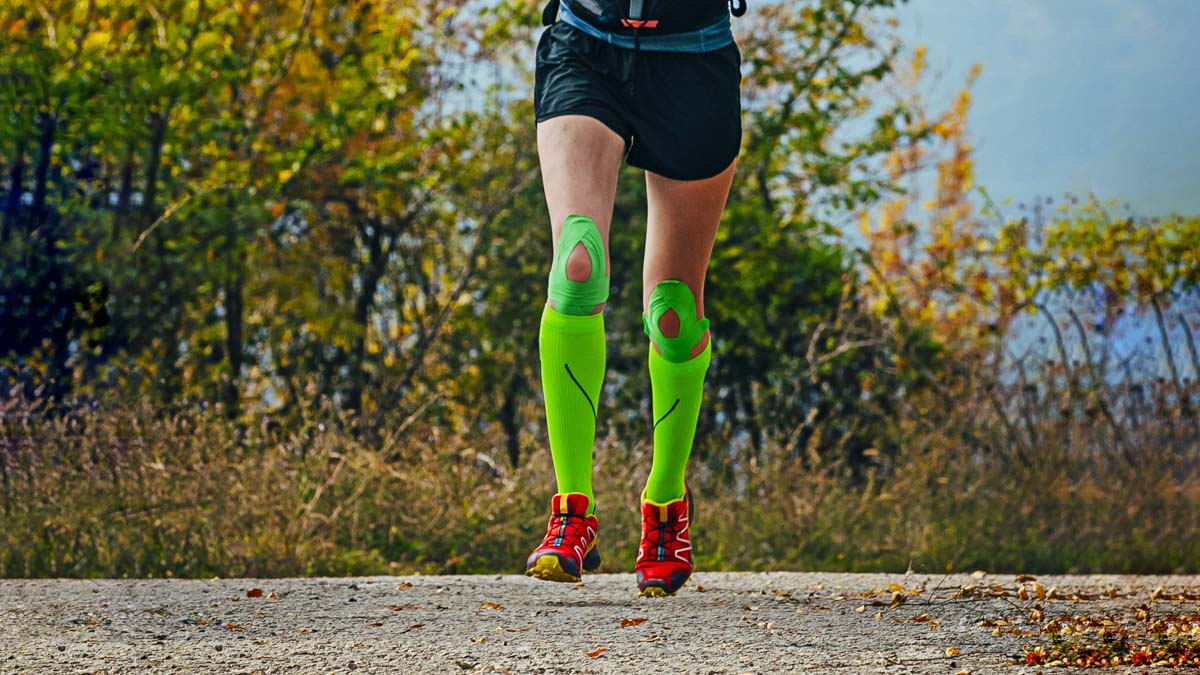 Is Kinesio Taping Effective for Athletes?

The colorful world of kinesio tape has gained popularity amongst athletes in the last decade, but does it do its job? Dr. Jeff Sankoff debunks the myth of KT.

By now you’ve likely seen the meme of a woman standing on a beach waiting to start the swim portion of her triathlon, her skin taped in blue. With the caption “It’s probably best to sit this one out”, pretty much every square inch of exposed skin is covered by that multicolored ubiquitous accessory seen at all multisport events, kinesio tape (aka, KT).

Kenso Kase, a chiropractor, is credited with inventing KT back in 1974. Up to that point, taping was used to stabilize joints that had been injured or were at risk of being injured using strong, inelastic tape that was applied almost like a cast to reinforce joints and prevent unwanted movements. KT differs from regular tape in that it is strongly elastic and can stretch anywhere from 40-60%. By applying the tape in its stretched form, it produces a significant pull on the skin (and, theoretically, the underlying tissues, where KT is purported to confer its benefits) when it tries to return to its normal length.

KT got a huge break when it showed up on athletes in 2008 at the Beijing Olympics. After that, there was an explosion in interest and it wasn’t long before amateur athletes were sporting it in all of its resplendent colors. Over the years, KT has essentially been promoted for three main purposes: injury rehabilitation, injury prevention, and enhanced performance. The purpose of this article is to explore whether or not KT accomplishes these purported benefits.

The first of the advertised benefits of KT is a reduction in pain associated with injury. It is hypothesized that by stimulating sensory pathways in the nervous system, KT can reduce pain by effectively diminishing the input from nerve fibers that conduct pain sensation. In addition, KT application theoretically lifts the skin which directly reduces pressure on subcutaneous pain fibers.

Several studies have looked into this, and the findings have been mixed. In one of the best studies, KT did actually cause a statistically significant reduction in pain when compared to a placebo, but the actual reduction was trivial and not clinically significant. Based on the cumulative evidence, KT has not been shown to have any clinically important benefits in reducing pain from injury.

A second way in which KT is said to help athletes is with improving range of motion after an injury. It supposedly does so by increasing blood circulation in the taped area which may facilitate an increased range of motion within the muscle. Additionally, some theorize that fear of movement is associated with pain intensity in patients, and so the application of KT provides sensory feedback that potentially reduces fear of movement.

Several studies have attempted to evaluate this question across different joints, and with mixed results. One study showed the benefit of improved range of motion of the shoulder, but this did not last over time. The result was clinically significant, though leading researchers concluded that while KT has at least a small, immediate effect on pain-free shoulder range of motion, it is unlikely to have long-term beneficial effects.

Some other studies looked at KT for improving neck range of motion after injury and found that overall, KT had a trivial effect on cervical range of motion for the vast majority of patients, both acutely and for 24 hours post-treatment. Similar results have been reported for shoulder impingement syndrome and low back mobility issues. Essentially, KT has no benefits for these conditions and is not recommended.

KT is also suggested to improve muscle strength, which is obviously of interest to athletes. Here the evidence is really conflicting, with a handful of studies demonstrating that KT can boost muscle strength — particularly in the lower extremities — but for every paper that shows a positive result, there are others that show exactly the opposite.

So for this supposed benefit the evidence is very inconsistent, with studies of varying quality showing results both ways. Consequently, all that can really be said is that there is some evidence for KT having at least a small beneficial effect on strength. However, given the conflicting findings across so many studies, no clear conclusion has been made.

The purported efficacy of KT in improving proprioception is of interest. Proprioception is defined as the sensation of where body parts are in space in relation to each other. Increased proprioception is felt to be important in reducing injuries. The pressure and stretching effect of KT on the skin is believed to stimulate sensory receptors on the skin, which in turn conveys information about joint position and movement. Therefore, KT may enhance proprioception and reduce the likelihood of injury.

Few studies have investigated this supposed benefit, and those that have offer conflicting results. While there are no studies that definitively demonstrate that KT does not work to enhance proprioception and thus prevent injuries, there are also no studies that show its efficacy. Consequently this is another area in which no definitive conclusion can be made.

No Harm, No Foul

I know this lack of supporting evidence in favor of KT may be disheartening to some. I am well aware of the passionate cheerleading by the principal users of KT, physiotherapists. Interestingly, one of the best studies of the effects of KT was actually conducted by physiotherapists, though it set out to answer a question that many would find rather amusing.

In the face of research that had previously shown that teams wearing certain colors perform better than expected over time against teams in other colors, these physiotherapists wondered whether or not the color of KT might have an impact on athletic performance, even if the physical characteristics of KT don’t.

They surmised that KT would be better than no KT, and that the color of the tape would be associated with performance increases as well, where red would be best, blue in the middle, and beige the least effective. In the end, the research was in line with most of the other papers. That is to say, KT conferred no benefit over no KT, and the color of the tape also did not have an impact.

While there is no evidence to support the major claims of advocates of KT, it is also worth noting that there is no evidence that KT causes any harm. So at the end of the day, the decision to use this material is entirely an individual one. If KT makes you feel better, then there is no reason not to use it — just don’t overdo it and become the subject of another meme!