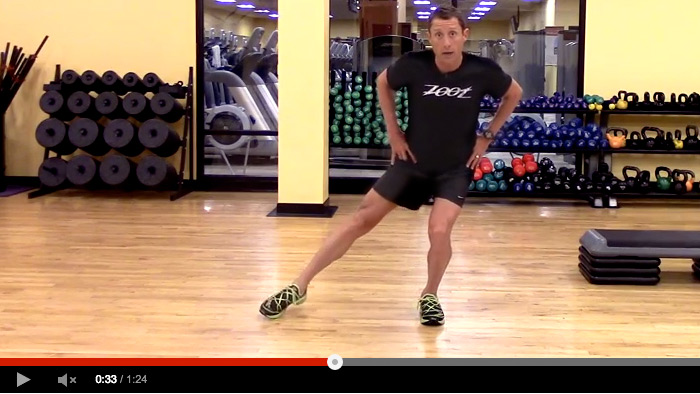 Endurance athletes often suffer from one of many leg injuries that can be prevented. Performing these preventive exercises can help you stay balanced, aligned and out training.

As athletes and coaches, our top priority is to remain injury free so that we can continue training and developing athletically. There are a variety of predictable patterns of injury that can occur within populations of cyclists, runners, cross country skiers, swimmers or really any group of athletes.

We simply cannot train at an optimal level if our tissue or joints are dysfunctional (misaligned, in a shortened or lengthened state, etc.). Here, dysfunction is a byproduct of repetitive movement occurring predominantly in one plane through a limited range of motion.

Injuries for runners typically present from the hip down, often occurring at the knee, foot or lower leg. Knee injuries include Illiotibial syndrome (commonly known as IT Band), patellar or quadriceps tendonitis, and meniscus tears. Low leg and foot injuries can include plantar fasciitis, achilles tendonitis, or shin splints. Cyclists can develop similar injury patterns.

Almost any injury can be traced back to errors in training or errors of neglect. When we increase loads or intensities beyond what the structures can safely accommodate we trend towards injury. Likewise, and equally important, neglecting to develop and maintain the health of the tissue and proper motion of joints through strength training, mobilization and therapeutic modalities (massage or PT) we create dysfunction and eventually breakdown in the form of injury.

The typical response to injury is reactive instead of pre-habilitative/preventive. As a strength and conditioning coach, I often see athletes train without proper maintenance (strength training, massage or manual therapy) until an injury arises. Only when an injury has surfaced does the athlete seek out Physical Therapy where they will receive some mode of treatment and exercise prescription. Often the exercise prescription is very specific and narrow in its scope. When exercises become too localized and specific they can neglect the source of distortion and dysfunction which is often either up or down the chain. For instance, an injury at the knee can often be caused by the hip not effectively “anchoring” the femur and allowing it to float. At this point it’s too late, the athlete is behind the curve of the cumulative injury cycle, and forced to reduce training load where some detraining will occur. As a coach and an athlete, it’s far better to plan our rest than be forced to take it.

Part of injury prevention is strength training and appropriate mobilization of joints/tissues. Below is a playlist of some exercises that will help to strengthen and stabilize the low leg and knee, thereby reducing the risk of injury and improving overall health and function. It’s important to note that our current models of biomechanics demonstrate that the foot, knee, and hip are directly linked through continuities of fascia and musculature that connect the two (there are bodies of tissue that connect the foot and head). The knee is the link in the chain between them, largely influenced by the integrity and function of both the hip and ankle. When dealing with human movement, the part always affects the whole.

The aim of these exercises is to promote strength and proper movement of the knee and lower leg. The foot alone has 26 bones and 33 joints with over a 100 different ligaments, tendons and muscles. This video covers five exercises you can do to help prevent some of the most common lower leg injuries.

Shane Niemeyer (CSCS, PES, CPT) is a coach, motivational speaker, author and elite age group athlete racing Ironman and 70.3 distance. As a strength and conditioning expert and endurance coach, Shane has helped individuals of all abilities to achieve their goals. For inquiries or questions on the above, feel free to contact Shane through his website at'www.trueambitions.com'or on Twitter'@shaneniemeyer.