There are literally dozens of different variables that are relevant to running performance.  But one that is often overlooked, may just be one of the most important. 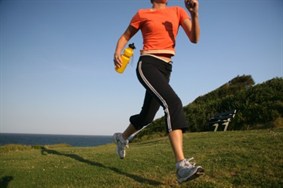 There are literally dozens of different variables that are relevant to running performance.  Among the more familiar ones are VO2max, lactate threshold speed and running economy (or the rate of oxygen consumption at a given speed—the lower the better).  One of the most under-appreciated performance-related running variables is ground contact time, or the amount of time your foot is in contact with the ground on each stride.

Some interesting studies have demonstrated the importance of minimal ground contact to running performance.  For example, a study by Finnish researchers investigated the relationships between running mechanics, top running speed and economy in young runners. Twenty-five runners performed two separate tests on an indoor track. The first test was 8 x 30m at increasing speeds, up to maximal sprint speed.  The second test was 5-6 x 1,000m at increasing speeds. In the first test, ground reaction forces and stride characteristics were measured at each running speed. In the second test, running economy at the speed of 3.89 meters per second and maximal oxygen uptake were determined. The researchers found that, of all the stride characteristics measured in the short sprints, only ground contact correlated significantly with both running economy and maximal running speed. The authors of the study wrote, “It is concluded that the short contact times required in economical and high-speed running suggest that fast force production is important for both economical running and high top running speed in distance runners.”

More recently, researchers from Ryukoku University in Japan placed a high-tech video camera at the 15 km point of an elite half-marathon race and videotaped 415 runners as they passed it.  The researchers then studied the tape to gather measurements of ground contact time for each runner.  They observed a strong negative correlation between ground contact time and speed—that is, the feet of the fastest runners spent the least time in contact with the ground.

So how do you train to reduce your ground contact time? Simple: You train to increase your stride power and leg stiffness and improve your biomechanics.  The most basic way to add power to your stride is to regularly include some very fast running in your training.  Once a week, after completing an easy run, do a set of short sprints—say, 6 x 60m at full speed.  To minimize the risk of pulling a hamstring, do these sprints on a steep hill, if possible.  Also include regular submaximal running in the 5K-1500m race pace range.  At least once every 10 days, complete an interval run with at least 2 total miles of running in this pace range (e.g. 6 x 600m @ 3K race pace with 400m jogging recoveries). 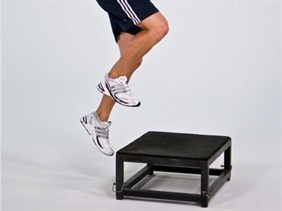 Studies have shown that plyometrics (jumping drills) and heavy weightlifting are effective ways to increase leg stiffness and, consequently, running economy.  A little goes a long way.  For example, in one study a regimen of 4 sets of 4 heavy half-squats performed 4 times per week produced big gains in running economy and time trial performance.  A very efficient way to include some plyometrics in your training is to insert them within runs.  For example, in the middle of a run, break stride and hop forward on one leg for 20 strides, then hop on the other leg.  Gradually build up to 2 sets of 30 hops on each leg.  (If you don’t like being laughed at, be sure no one’s around when you do this drill.)

Perhaps the simplest way to improve your running biomechanics to reduce ground contact time is to switch from a heel strike to a midfoot strike.  In the Japanese half-marathon study mentioned above, researchers found a significant correlation between foot strike position and ground contact time: The average ground contact time for heel strikers was 199 milliseconds versus 183 milliseconds for midfoot and forefoot strikers.  There was also a significant correlation between foot strike patterns and performance, with runners placing among the top 50 being almost twice as likely to be midfoot or forefoot strikers (36 percent versus 19 percent) as runners placing between 151st and 200th).

Start paying attention to where impact force is concentrated on the bottom of your foot when you run.  Fiddle around with your stride to make that “ground zero” zone move slightly forward.  Also try tilting your whole body very slightly forward from the ankles (not the waist!) as though you’re running downhill.  This will force your foot to land underneath your hips, where it’s supposed to land, rather than out front, where it must hit heel first.

You probably have never put much thought into your ground contact time.  After all, you can’t exactly measure it on your own.  But you can improve it even without measuring it, and reducing the amount of time your feet are touching the earth as you run is one of the best things you can do to improve your running.