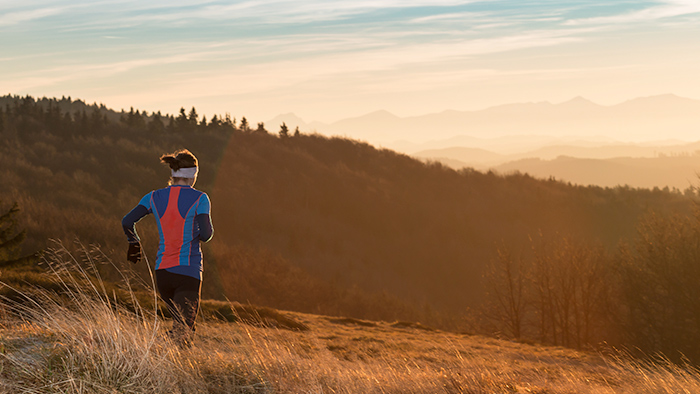 When is Running With Power Superior to Running at Pace?

While pace remains the most popular metric for measuring output, running with power can be a valuable tool for holding a steady effort over varied terrain, as well as helping runners develop economy of movement.

Traditionally, runners use pace as a surrogate for their effort during training and racing. Theoretically, the effort during running is defined by the power of the “human engine.” In our book “The Secret of Running” and in a previous post on running with power, we have shown that in running the total required power P is the sum of the power required to overcome the running resistance Pr, the air-resistance Pa and the climbing resistance Pc, as indicated in the figure below:

In this article, we will analyze the impact of the three resistances on the correct pace. We will show that in order to maintain a constant effort/power, it may be required to adjust the pace significantly (by 15 percent or even more). Consequently, running with power is superior to running at pace, particularly when the three resistances are not constant during a workout or race.

The impact of hills (climbing resistance)

In a recent paper, we analyzed the impact of the climbing resistance on running pace. During uphill running, the required power increases and downhill it decreases as a result of gravity. As it is always best to run at constant power, this means that while going uphill you should reduce your pace to maintain constant power. Going downhill the reverse is the case.

The table below shows the impact of a hill with a gradient of 3.5 percent on the correct pace of the author (FTP 250 Watts, body weight 58 kg, P= 4.31 Watts/kg). Obviously, the impact will be even bigger at steeper gradients, as the energy cost of hills is proportional to the gradient.

The impact of the wind (air-resistance)

In another recent paper, we analyzed the impact of the wind on the air-resistance. Facing a head wind, the required power increases, while it decreases in a tailwind. As it is always best to run at constant power, this means that in a head wind you should reduce your pace to maintain constant power. In a tailwind the reverse is the case.

The table below shows the impact at a wind speed of 15 km/h (at breast height) on the correct pace of the author (FTP 250 Watts, body weight 58 kg, P= 4.31 Watts/kg). Obviously, the impact will be even bigger at higher wind speeds, as the energy cost of the air-resistance is proportional to the square of the wind speed.

We note that state-of-the-art running power meters do not reflect the air-resistance by the wind correctly. One running power meter, Stryd, is currently working on two possible solutions to handle this and they may come up with a product later this year. At the moment, the best thing we can do is to use the theoretical calculations from our book to predict the required pace as a function of the wind speed and direction.

The impact of the energy cost of running (running resistance)

In our book, we analyzed the energy cost of running (ECOR), which is defined as the power required to overcome the running resistance, divided by the running speed. Obviously, the ECOR of a trail or non-pavement surface will be higher than the ECOR of an asphalt pavement, which has a lower resistance.

From literature, we concluded that on a level and hard course, the ECOR is typically 0.98 kJ/kg/km. Of course, this number will not be the same for everyone: it depends on many factors, including body posture, fuel mix and running form. Generally, it is believed that the ECOR of highly efficient elite runners could be as low as 0.90 kJ/kg/km, whereas the ECOR of inefficient joggers could be as high as 1.10 kJ/kg/km. So far, we have seen that our own data and those of many other runners are quite close to 1.00 kJ/kg/km.

Obviously, a lower ECOR means that you are running more efficiently and consequently you can run faster. So every runner should try to lower his ECOR! Unfortunately, we cannot change our body posture (apart from shedding excess body fat) and the fuel mix in our muscles (apart from carbo-loading before the marathon). The Kenyan elite runners share many advantages like slim calves, flexible hips and (relatively) long legs. So, the only factor that we can try to optimize is our running form.

Many factors are thought to influence the running form, including cadence, GCT, stride length, vertical oscillation, arm drive, foot strike, hip angle, knee lift, leg stretching, calves lift and ankle angle. However, opinions differ on exactly what constitutes the best running form. In a recent paper we found that the ECOR could be reduced by increasing the cadence.

The table below shows the impact of the ECOR on the correct pace of the author (FTP 250 Watts, body weight 58 kg, P= 4.31 Watts/.kg). Looking at the data, it’s possible that the author could run much faster if he could reduce his ECOR to 0.90 kJ/kg/km. To be honest, we have not found the answer how he could achieve this.

Unfortunately, the present state-of-the-art running power meters do not yet reflect the impact of the wind and surface footing correctly. This means that presently the main advantage of running  with power meters is to maintain constant power during hilly courses.

In spite of these limitations, we are very excited that power meters do provide us with an opportunity to determine our ECOR on a daily basis, so we can try to optimize our running form. We are sure that this will pave the way to concrete improvements in our ECOR and race results.

We realize that this will not be easy because for us—and for most people—the running form has been habituated over many years of running. We will not be able to change it overnight. But with time and concrete data, we are confident we will be able to get some improvement.

Thank you to the co-authors Ron van Megen and Guido Vroemen.

About Hans van Dijk
Hans van Dijk is professor-emeritus at Delft University of Technology and a lifelong runner. He has developed new concepts and models to analyze,  predict and optimize the performance in sports. He is the author of numerous books and papers on running, cycling, speed skating and other endurance sports. www.thesecretofrunning.com  |  www.thesecretofcycling.com
#RUNNING