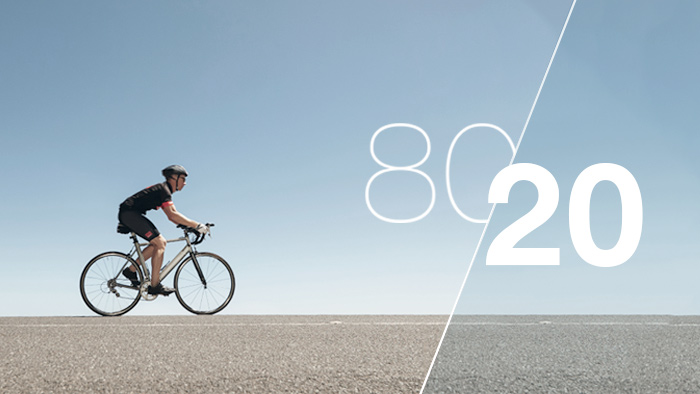 The most fundamental variables of triathlon training are volume and intensity. In lay terms, volume is how much you swim, bike, and run and intensity is how hard you do these things. No other factor affects the outcomes of training as strongly as these two.

However, despite the supreme importance of volume and intensity, it was not until the early 2000s that researchers initiated attempts to provide solid, empirical answers to address the question of how to optimize these variables in the training process. There were two main questions they attempted to answer. The first was, “What amount of training improves fitness the most?” The second questions was “What are the relative proportions of low, moderate, and high-intensity training that yield the best race results?”

Thankfully, these efforts have already generated findings that triathletes of all experience and ability levels can use immediately to overcome common mistakes and train more effectively. Specifically, it has been demonstrated that triathletes and endurance athletes gain the most fitness when they do approximately 80 percent of their training at low intensity (think zone 1 and 2) and the remaining 20 percent at moderate (zone 3) and high intensities (zone 4 and above). While much more work needs to be done before the volume and intensity questions are fully answered, this so-called “80/20 Rule” gives you a reliable framework to utilize in planning and executing your training.

How the Pros Train

The researcher who discovered the 80/20 Rule is Stephen Seiler, an American exercise scientist based in Norway. In the early 2000s, Seiler embarked on a mission to determine how elite endurance athletes really train. He found a remarkably consistent pattern. World-class cyclists, Nordic skiers, rowers, runners, swimmers, and triathletes in all parts of the world did approximately 80 percent of their training at low intensity.

In 2011 and 2012, for example, one of Seiler’s collaborators, Iñigo Mujika of the University of Basque Country, closely monitored the training of Spain’s top female triathlete, Ainhoa Murua, for 50 weeks in the lead-up to the London Olympics. He found that she did 74 percent of her swimming, 88 percent of her cycling, 85 percent of her running, and 83 percent of her combined training below the lactate threshold, or the intensity above which lactate, an intermediate product of aerobic metabolism, accumulates rapidly in the blood.

Lactate threshold falls in the middle of the moderate-intensity range, as most scientists now define it. This means Ainhoa did slightly less than the above-mentioned percentages of her training, almost exactly 80 percent, at low intensity. Ainhoa went on to finish seventh in the 2012 Olympic Women’s Triathlon.

It’s impossible to draw general conclusions from individual case studies. But the intensity distribution of Ainhoa Murua’s training in 2011 and 2012 is remarkably consistent with that of other elite triathletes and indeed other elite endurance athletes generally.

What accounts for this consistency? Seiler has proposed that it emerged as the outcome of a trial-and-error process much like natural selection (i.e., evolution) in nature. In the nearly 150 years since endurance sports took their modern form in Europe, every conceivable way of balancing training intensities has been tried and pitted against other methods in high-stakes international competition. Over the course of that century-and-a-half, all of the inferior methods have gone extinct at the elite level. Only the best, the 80/20 model, has survived.

Recreational triathletes spend a much smaller percentage of their training time at low intensity and a much larger percentage at moderate intensity. A 2011 study by researchers at the University of Stirling found that age-groupers training for an IRONMAN event did just 69 percent of their training at low intensity and 25 percent at moderate intensity. The study also included periodic performance tests in all three disciplines that showed little improvement over the six-month training period.

Did these athletes fail to improve because they did too much moderate-intensity training and not enough low-intensity work? The results of another study suggest that this may have been the case. In 2014, Stephen Seiler and colleagues monitored the training of nine recreational triathletes training for an IRONMAN event. They found a strong correlation between percentage of total training time spent at low intensity and performance in the race. On average, the athletes spent only 68 percent of their training time at low intensity, but those who came closest to obeying the 80/20 Rule achieved the better finishing times.

Observational studies like this one do not prove that an 80/20 intensity balance is optimal. Only prospective studies, in which athletes of similar ability are placed on programs with different intensity ratios, can do that. This type of study has also been done, and the results offer further support for the 80/20 approach.

One such study was done by researchers at the University of Salzburg and involved 48 endurance athletes representing various of sports, including triathlon. These athletes were divided into four groups and placed on training programs with different intensity distributions for nine weeks. All four groups completed a battery of performance tests before and after the nine-week period. None of the groups followed the 80/20 rule precisely, but the group that came closest achieved the greatest improvements in VO2max, time to exhaustion in an incremental exercise test, peak cycling power, and peak running velocity.

It is widely assumed that the reason elite endurance athletes spend so much time at low intensity is that they must do so in order to sustain the extremely high training volumes they do. In other words, it is assumed that volume is primary and intensity secondary in the formula for optimal training. But the latest science indicates that the opposite is true.

If a “mostly-slow” approach to intensity were necessary only to allow high-volume training, then recreational athletes training at lower volumes would fair better with an approach that leaned more on moderate and/or high intensity. Indeed, many age-groupers believe they can “make up for” training less by training harder. But in a 2014 study, Seiler found that club runners who ran just 35 miles per week on average improved their 10K race times by twice as much as runners who did half of their training at moderate intensity (which is typical of recreational runners).

So it appears that an 80/20 intensity balance is optimal for all endurance athletes. The optimal volume of training for each athlete is the amount of 80/20 training that yields the best results. Because low-intensity training is so gentle, this amount will be relatively high for everyone, but higher for some than it is for others, and it will tend to increase for each athlete as he or she develops.

Now that you’ve been persuaded to obey the 80/20 Rule in your training, it’s time to start actually doing it. This is a two-step process. Step one is planning; step two is execution.

One of the great things about the 80/20 Rule is that it’s mathematical, which makes planning relatively easy. All you need to do is create a schedule in which approximately 80 percent of your total weekly training time (not distance) in each discipline is spent at low intensity.

My 80/20 Training partner David Warden has created an online calculator that makes it easy to determine individual training zones in swimming, cycling, and running. We use a five-zone scheme where Zones 1 and 2 are low intensity, Zone 3 is moderate intensity, and Zones 4 and 5 are high intensity.

Note that it is only necessary to follow the 80/20 Rule when you are actively pursuing maximum race fitness, which you should not do throughout the year. During off-season and early base training, it’s best to do somewhat less than 20 percent of your training at moderate and high intensities. This will allow you to gently build your fitness to a level where you’re ready to switch over to 80/20 training for the final push toward competition.

Note also that in high-intensity interval workouts, the entire interval block, including active recoveries, should be counted as time spent at high intensity. This is because doing so more accurately reflects where your heart rate actually is over the course of the session. For example, suppose you do a cycling interval set consisting of 8 x 1 minute at high intensity with 2-minute low-intensity recoveries between intervals. In this case, your heart rate will spend close to 24 minutes in the high-intensity range even though you are only producing high-intensity power outputs for 8 minutes.

Swim workouts are almost always planned in distance. When planning your swim training in accordance with the 80/20 rule, account for the fact that you will cover equal distances in less time at higher intensities than you will at lower intensities. If you plan to cover about 75 percent of your weekly swim distance at low intensity, you will end up spending about 80 percent of your weekly swim time at low intensity.

Here’s a very simple example of a week of 80/20 triathlon training:

Planning to train by the 80/20 Rule is one thing. Actually doing it is another. On a practical level, getting in line with this rule requires slowing down a little in workouts that are intended to be done at low intensity. A majority of recreational triathletes unconsciously self-select swim, bike, and run speeds that are slightly above the ventilatory threshold in basic aerobic conditioning sessions. In other words, when athletes think they are at low intensity, they are in fact at moderate intensity, a phenomenon I call “intensity blindness”.

Overcoming intensity blindness requires constant monitoring of relevant intensity metrics such as heart rate, pace, and power and a willingness to go a little slower than your body wants to. This transition proves surprisingly challenging for many athletes, who find it difficult to escape the inertia of habit and/or difficult to believe that slowing down will actually benefit them.

It takes discipline and restraint to complete this transition, but those who do are always well rewarded. First you will notice that you just feel more comfortable in your low-intensity workouts and perhaps enjoy them more as a result. Then you will discover that you feel fresher for your harder workouts and perform better in them. Next, you will experience accelerated fitness development. And finally you will achieve a performance breakthrough in your next race. By then, you will be completely sold and forever hooked on 80/20 training.