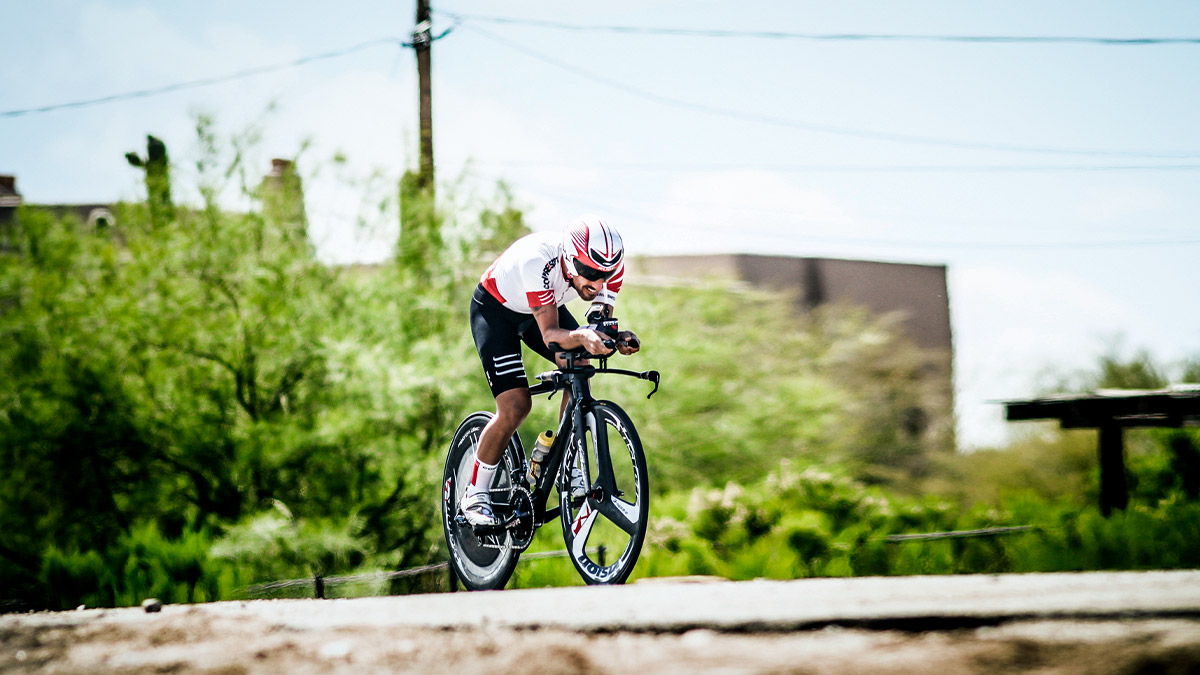 How to Fit Race-Pace Workouts into Your IRONMAN Training

It’s important to spend some time training at or near your race pace in each triathlon discipline—here’s how to do it without burning out.

There are two important reasons to include a certain amount of swimming, cycling, and running at (or near) your anticipated race speed during IRONMAN training. The first is that it helps you determine what these speeds actually are, so you can set appropriate goals and pace yourself sensibly throughout the event. The second reason to train at race speeds is that doing so will make you more efficient and comfortable at those speeds when it counts.

Given these benefits, you might think it would be a good idea to do a lot of training at race speeds, but in fact, you shouldn’t. The reason is that, for many athletes, IRONMAN swim, bike, and run speeds correspond to a physiologically moderate intensity, and spending too much time at moderate intensity is known to inhibit overall endurance fitness development. Thus, although race-pace workouts have an important place in IRONMAN training, that place should be relatively small.

Research conducted by Stephen Seiler of the University of Agder, Norway, has demonstrated that endurance athletes of all experience and ability levels tend to improve the most when they spend about 80 percent of their total training time below the intensity level marked by the ventilatory threshold, which falls around 78 percent of maximum heart rate. The majority of age-group triathletes spend far less time at low intensity, however, and it costs them.

In a 2011 study, researchers at Scotland’s Stirling University rigorously monitored the training of 10 age-group triathletes for six months as they prepared for an IRONMAN event. On average, these athletes spent less than 70 percent of their training time at low intensity. What’s more, physiological testing performed periodically throughout the study period revealed the subjects achieved only modest improvements in fitness despite substantial increases in workload, probably because they did too much of that work (25 percent) at moderate intensity.

Three years later, a team of scientists at the European University of Madrid published findings that reinforced this conclusion. As in the Scottish study, a number of age-group triathletes were monitored while they prepared for an IRONMAN event and were found to have spent less than 70 percent of their total training time at low intensity. But there was a fairly high degree of variation in intensity balance between individuals, and the study’s authors reported that those athletes who spent the most time at low intensity tended to perform better in the race, whereas those who did the highest percentage of their training at moderate intensity tended to perform worse. This was the case even though the subjects spent the majority of their time at moderate intensity within the race.

It would be a mistake, however, to conclude from these findings that moderate intensity work should be avoided at all costs in IRONMAN training. Training at moderate intensity, and specifically at or near IRONMAN race speeds, can help you improve your pacing. Evidence for this comes from a 2017 study by Australian researchers, who found that performance in a series of 20-kilometer cycling time trials got better and became less variable with each repetition in a group of recreationally active adults with no prior TT experience. Although a 20-km cycling time trial is not an IRONMAN, the same familiarization effect applies. Doing a select number of swims, rides, and runs at your estimated or targeted IRONMAN speed will help you set more realistic targets and do a better job of staying on target in competition.

The second benefit of race-pace training, improved efficiency, is also supported by science, including a 2008 study conducted by researchers at the University of Brighton. For a period of four weeks, seven runners followed a training program consisting of tempo runs at lactate threshold speed while seven other runners followed a program of similar workload but consisting of workouts that featured alternating efforts slightly above and slightly below lactate threshold speed. Testing done both before and after the four-week intervention revealed that members of the first group experienced larger improvements in lactate threshold speed, whereas members of the second group saw bigger gains in VO2 max (a higher intensity that’s closer to the speed they ran during the faster parts of their interval workouts).

In other words, despite following very similar training protocols, the runners in this study gained fitness in different ways depending on the specific intensities they targeted most often.

So how can you avoid the common and costly mistake of spending too much time at moderate intensity in IRONMAN training, while enjoying the clear benefits of doing some training at IRONMAN speeds? You end up with an approach to training where 1. about 80 percent of total training time is spent at low intensity; and 2. a select number of swim, bike, run (and brick) sessions performed at or near IRONMAN speeds are sprinkled in.

It should be noted that not all of the training you do above low intensity should be done at moderate intensity. Some of it should also be done at high intensity, which is to say, at or above VO2 max. Nor is it necessary for all of your moderate-intensity training to take the form of race-pace practice. After all, lactate threshold intensity, which falls above IRONMAN bike and run speeds (and very close to IRONMAN swim speeds for faster athletes) is moderate too, and has clear benefits when targeted in tempo sessions and longer intervals.

So, exactly how much race-pace training is enough (without being too much)? There’s no magic number, but a good starting point is four to six swims, rides, and runs (including bricks) of increasing duration spread out over the final 12 weeks of the training process. Your longest workouts at this pace should not exceed 1.2 miles (the half IRONMAN distance) in swimming, 70 miles on the bike, and 16 miles in running.

Follow this simple protocol and you’ll be well on your way to ensuring you have the right intensities in your training for optimal performance on race day. Check out the full 80/20 plan for more information on ideal training intensity.