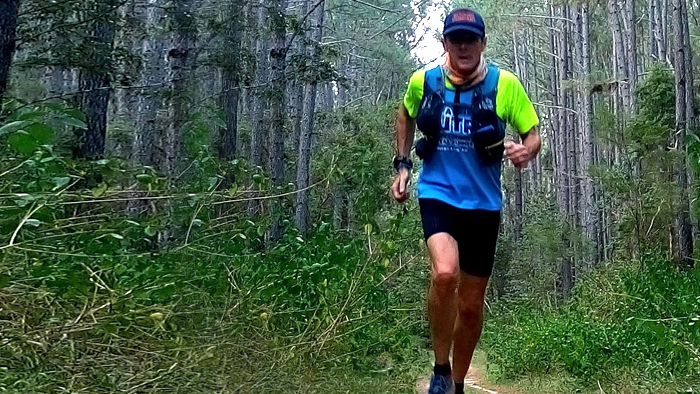 TrainingPeaks Success Story: How This Ultrarunner Busted Through His Training Rut

When Anthony Cathcart started working with Coach Andrew Simmons, he finally dialed in his intensity work, built strength and learned how to recover properly—all of which allowed him to make a huge performance breakthrough.

Like many longtime endurance athletes, 55-year-old Tony Cathcart of Queensland, Australia, had found himself in a bit of a performance rut. Despite training consistently, the ultrarunner was feeling stagnated and felt that he needed to make some adjustments to his training.

Luckily, he had a solid six months before his “A” race of the year—the Blackall Range 100K on the Sunshine Coast. As the 2017 Australian National Long Course Championship, he knew it would be a competitive field, but if he could get his training squared away he knew he had a solid performance in him.

So he reached out to U.S.-based coach Andrew Simmons of Lifelong Endurance. “Andrew is a nice guy with a good sense of humor, but I could tell that he really knew his stuff and I just liked his overall approach,” explains Cathcart.

Simmons got to work right away looking at Cathcart’s data, and right away a few things jumped out at him. “He was running too hard too often, spending a significant amount of time in Zone 3 and never really pushing hard into his upper zones,” expalins Simmons. “This also meant he wasn’t running slow on his easy days, so he was never really getting the recovery that he needed.”

Simmons also added in a strength-training regimen so Cathcart could gain durability in the later stages of his 100K. “Strength training was crucial to his success as it allowed him to stay strong late in the race while also increase his running economy and efficiency.”

Finally, Simmons adjusted Cathcart’s periodization schedule from three weeks up, one week down to two weeks up and one week down. “This gave him the ability to recover more often so he wasn’t accruing too much fatigue during his builds.”

Within six weeks, Cathcart was hitting PRs on segments he wouldn’t have been able to touch previously, and during the few months leading up to the race, Simmons built Cathcart’s Chronic Training Load (CTL) from 50 to 77. “I could see all of this improvement through my Ramp Rate in TrainingPeaks, and it was just so motivating,” says Cathcart.

After ever run, Cathcart would head home, upload his data and immediately check out his Performance Management Chart (PMC) to see how he was progressing. “It’s such a professional approach, having the ability to see your progress on your dashboard but then also getting the valuable feedback from your coach,” he says. “I mean, other apps provide you with the social aspect but with TrainingPeaks you can really get into the numbers and see where you’ve been, where you’re at and where you’ll be on race day.”

To gauge his progress further, Simmons would have Cathcart run along the same route as a tempo workout or time trial. The route featured many of the same elements, plenty of climbing and technical singletrack, that he would encounter on race day. “By doing this we could compare effort to effort and see if he was completing the route with a lower heart rate or higher pace. Plus it helped him with mental preparation for what he would encounter on race day.”

“During my taper Andrew sent me this really great email letting me know that my ramp rate and my CTL were exactly where he wanted them, and it just came at just the right moment to make me really feel ready for my race,” says Cathcart.

When the gun went off on October 20, Cathcart was rearing to go. He held a solid 14-hour pace through the 70K mark—despite severely declining conditions—and while they closed the course shortly after he passed through due to weather, because he had already made it through that section, he was allowed to finish. “I was really proud of myself for going fast enough that I wasn’t one of the unlucky ones who had to stop their race prematurely,” says Cathcart.

With a top-10 age-group finish in a highly competitive field on an extremely difficult day, Cathcart and Simmons are ready to step things up together in 2018. Cathcart will be attempting his first 100-mile race later next year, and the two have just begun his training in earnest after some much deserved time off. “My expectation is that Tony will be able to run down a Western States qualifier and get a ticket in the lottery,” says Simmons. “I’m excited to start working with him again and help him see his true potential!”

Are you in a training rut or struggling to get to that next level? Learn more about how TrainingPeaks can help you reach your goals.

About Susan Legacki
Susan Grant Legacki is the Content Director at TrainingPeaks. The founding editor of LAVA Magazine and a former editor at Triathlete Magazine and Inside Triathlon, Susan is an IRONMAN finisher, Boston Marathon qualifier, USAT Level 1 Triathlon Coach and certified Pilates instructor. When she's not editing or writing copy about endurance sports, you can usually find her training for them around Boulder, Colo.
#INSPIRATION#RUNNING#ULTRARUNNING