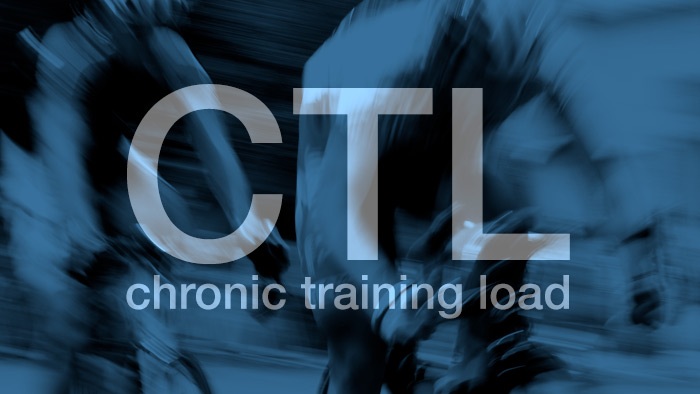 A TrainingPeaks subscriber recently wrote in to say that he uses the Performance Management Chart (PMC) and has a basic understanding of Chronic Training Load (CTL), Training Stress Score® (TSS®), Training Stress Balance (TSB), and the other markers of performance. Despite this, he still had one very important question- one that  has probably crossed many a user’s mind. His question was “So what?” In other words, why should you be interested in the numbers represented by all of the lines on the chart,  what value are they and what should your goal be for them?

That is a fair question and one that is too complex for a single post. I want to start with CTL, which is also referred to as Fitness, and will get to TSS and TSB in subsequent posts.

Let’s make sure you have a basic understanding before getting into the “so what”. CTL is also called Fitness since it is a is a rolling 42-day average of your daily TSS. It indicates how much training load you are currently managing. If your Fitness rises you are capable of handling a higher training load and therefore are more fit. And you may also assume the opposite.

“So what should my Fitness be?” the subscriber asked. I’m afraid I can’t answer that question with a one-size-fits-all answer as there are simply too many “it depends.” It depends, first of all, on what your sport is. For example, triathletes tend to have lower Fitness Levels per sport than do single-sport athletes. That’s obvious because a cyclist, for example, devotes nearly all of his or her training time to the bike while a triathlete spreads the total training load between three sports. The next biggest “it depends” factor has to do with the individual athlete. How much training load you are capable of handling differs from athlete to athlete? Life isn’t fair. Some people can easily manage a very high Fitness, such as say a 150 TSS per day average. Others would quickly wind up overtrained from attempting to do that. I won’t get into the other “it depends,” such as how much time one has available to train, as there are lots of them.

The best advice I can give you when it comes to what is an appropriate Fitness for you is to use your historical data as a starting point. Simply do what you seem to be capable of doing. You shouldn’t become so focused on Fitness that you try to take it very quickly to record highs. That’s a sure way to wind up overtrained. If you are in a serious period of training, such as the last 12 weeks before an A-priority race, you should see the line generally rising. In a recent blog post here I suggested that during such periods of focused training you may want to see your Fitness rise by 5 to 8 points per week, excluding rest and recovery weeks spaced every third or fourth week. During rest weeks your Fitness should be allowed to decline.

I hope that gets at the first “so what” question. I wish I could be more specific about the actual Fitness number, but as explained I can’t. It just depends. However, I can tell you how to use that number on any given day to get an idea of how hard your workout might be. This is not pure science. It’s more ballpark than precise. It may give you something to hang your hat on when it comes to scheduling workouts. I’ll get into that in Part 2.

Joe Friel will be a speaker at the Endurance Coaching Summit in Boulder, Co. on July 21-22. Learn more from him and other world class coaches and industry experts like Allen Lim, Neal Henderson, Andy Pruitt, Carrie Cheadle, and more. Get more details about ECS.

Joe Friel is the author of The Triathlete's Training Bible, Your Best Triathlon and other books on training. For more information visit his website at www.joefrielsblog.com. You can also view and purchase Joe's training plans on TrainingPeaks.