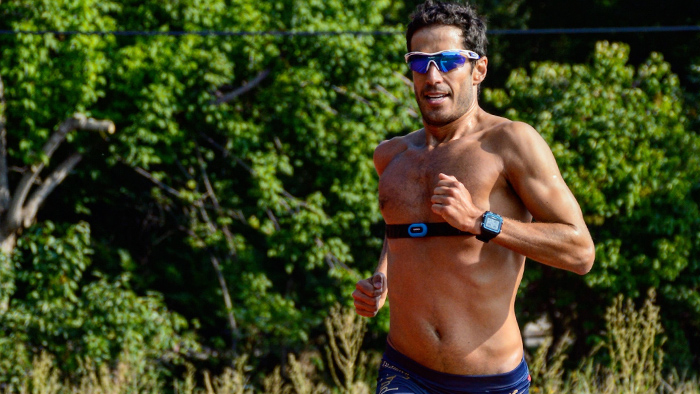 Eduardo della Maggiora entered his first triathlon on a whim, and less than three years later has climbed to the top of the age group rankings, with his sights set on a podium finish at the 2017 IRONMAN World Championship.

While sitting beneath a mosquito tent in Africa, Eduardo della Maggiora was surfing YouTube on his laptop when he came across a link that would change his life forever. “It was an hour-long edit of the NBC IRONMAN special, and I thought to myself, that is what I want to do.”

The famous NBC IRONMAN broadcast has launched thousands of IRONMAN journeys throughout the years, but one could argue few of them have been as meteoric as that of 37-year-old Maggiora, who in a little less than three years has qualified for two 70.3 World Championships, raced Kona, finished third overall at IRONMAN Florida and gone sub-9-hours at the IRONMAN distance—all with relatively little swimming, biking or running experience.

This year will mark Maggiora’s second time in Kona, but his first attempt since leaving his corporate job in Chile and moving to Boulder, Colo. to train full-time under the direction of former professional triathlete Michael Lovato. “I’m taking the next few years to really discover where my limit is, both mentally and physically,” explains Maggiora.

Maggiora has one of those annoying tendencies to succeed that most of us can only dream about. Born in Chile, he was a tennis star growing up, eventually deciding to step away from the international tennis circuit to focus on his industrial engineering studies at Pontificia Universidad Católica.

He ended up in the New York finance world for nearly a decade before returning to Chile, cofounding a boutique investment group, and devoting much of his life to charity work, specifically for the environment, micro-lending and education.

It was during one of many philanthropic trips to Africa that he first saw that IRONMAN YouTube video, and, in a strange coincidence, received an email offering to let him sign up for the 2015 IRONMAN Pucon 70.3. The race was six months away. He had never done a triathlon. He barely knew how to swim. He immediately registered.

Once he returned to Santiago, Maggiora began to pour over all the triathlon books and materials he could find. “I’ve read somewhere along the lines of 180 books on endurance training and triathlon,” says Maggiora. “What can I say, I’m an engineer. I like numbers.”

He finished IRONMAN 70.3 Pucon in January of 2015, and soon after heard about the Kona Lottery (2015 was the last year of its existence). Thinking he’d never actually get a slot, he put his name in—and got a slot for the 2015 IRONMAN World Championship. It would be his fourth triathlon ever.

A month prior to Kona he won his age group at IRONMAN 70.3 Ecuador, and qualified for 70.3 Worlds in Mooloolaba (where he would finish second in his age group). “I started to realize that maybe I was kind of good at this,” laughs Maggiora.

In 2016, he clocked an 8:58:22 at IRONMAN Florida, finishing third overall, winning his age group and earning his slot for the 2017 IRONMAN World Championship. “At that point I started to wonder what my limit was,” says Maggiora. “I sat down with my business partners and they supported my decision to leave the company for a while to pursue triathlon fully.”

Maggiora got married in March of 2017, and by May he and his new wife were moving into their rented apartment in Boulder, just steps from the pool where he spends most mornings swimming thousands of meters under the direction of Lovato. “Eduardo is 100 percent committed to the process,” says Lovato. “I thrive on coaching athletes who want to work hard and truly commit to the goals that we set, and it was clear from our very first conversation that Eduardo would be that type of athlete.”

Going from working full time to training full time has been adjustment for Maggiora, but he’s enjoying the process. “I’m so impressed by how the body adapts and recovers,” he says. “But I realize that I’m on this ascending curve with my results that will eventually flatten out—however I think after this first year of training load my real success will come next year. After that, who knows, I am just here to enjoy the journey and see how far I can push myself.”

A TrainingPeaks user since the beginning of his triathlon career, Maggiora has relied heavily on data to help prepare him for each race. “I’m a big PMC guy,” he explains. “I do an analysis on past races and my form before each one, and I aim to recreate those numbers before each race.” Maggiora pays particularly close attention to his CTL, both combined and singularly across swim, bike and run, in order to gauge his progress toward every race.

“I think having a coach like Michael, who is such a knowledgeable TrainingPeaks user has made a huge difference in my training,” says Maggiora. “I track my form to see my fatigue levels, and if I see that those numbers are too negative for several days—I send a note to him and we adjust accordingly. It makes it so easy to stay on top of it.”

Maggiora sends long notes to Michael after each of his key sessions, which during his final few weeks of building toward Kona will become especially important. “I’ll be doing three six-hour rides over the course of one week, and my notes to Michael will be so important in terms of whether or not we add a swim session if I’m feeling good, or back off somewhere else to allow me the recovery I need.”

He’s also found success using Best Bike Split, not only to help him plan his race strategy, but also to help him dial in his aerodynamics. “After IRONMAN Florida, I looked at my race plan and saw that despite the fact I was pushing ‘X’ watts for ‘X’ amount of time, my overall bike time wasn’t that great,” he explains. “So I brought my BBS race report to a bike-fitter and he was able to improve my position and aerodynamics—all using BBS—and it’s made such a huge difference in my performance.”

Maggiora raced the 2017 IRONMAN 70.3 World Championship in Chattanooga (finishing 2nd in his age group), and before the race he and Lovato worked out a power plan using BBS in order to navigate the course’s tough hills with just the right amount of effort. “Without BBS, I would have burned out or underperformed on that course’s big climb. Because I knew the range I should be staying in, I was able to climb with confidence and still come off the bike able to run a 1:19.”

Lovato believes that Maggiora has it in him to finish top-five in his age group, and their training in the final weeks heading into Kona is with that goal firmly planted in both of their minds. “Numbers-wise, I’d like to see him break nine hours and run a low-three-hour marathon to do that,” explains Lovato. “But as long as he’s happy with his performance, I’ll be happy. It’s really more about his expectations rather than mine.”

When Maggiora lines up on the starting line in Kona this year, he is optimistic his huge increases in training will pay off, but the engineer in him is realistic about the statistics. “Given that it’s my third IRONMAN ever and the competition is pretty tight, I think a podium finish would be amazing,” says Maggiora. “But I’m more excited for how this entire year of training plays into next season. I just want to see where my limit is and I’m enjoying have the opportunity to live here in Boulder and give it my all for as long as I can.”

Tune into our FaceBook Live with Eduardo della Maggiora and his coach, former pro triathlete Michael Lovato on Tuesday, October 10 at 3 p.m. (HST).

About Susan Legacki
Susan Grant Legacki is the Content Director at TrainingPeaks. The founding editor of LAVA Magazine and a former editor at Triathlete Magazine and Inside Triathlon, Susan is an IRONMAN finisher, Boston Marathon qualifier, USAT Level 1 Triathlon Coach and certified Pilates instructor. When she's not editing or writing copy about endurance sports, you can usually find her training for them around Boulder, Colo.
#IRONMAN#TRIATHLON