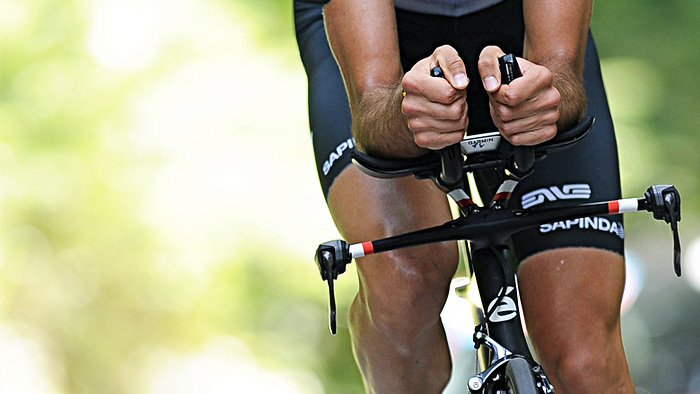 Stage 18 of the Tour de France is a unique, 17km uphill time trial. Ryan Cooper, the Chief Scientist of Best Bike Split, breaks down the the power, watts/kg, and possible bike selection for the top contenders.

Stage 18 of the 2016 Tour de France is a unique, 17km uphill time trial. The top contenders will need the right mix of watts per kilogram, aerodynamics, and raw power to take the win. We take a look at the course, the weather, power, and possible bike choices to see how the riders will tackle this stage.

The second individual time trial of the Tour de France is quite a bit different from stage 13, as it is the first mountain time trial in the Tour since 2004. Stage 18 starts with a flat 4km out of Sallanches before turning up the Côte de Domancy, a short but steep climb at 2.5km with an average grade of almost 10%. From there, riders will continue to climb roads with gradients around 4% towards the Côte de Chozeau, which kicks up to 5.4% for 3.1km. After cresting the top there is a 2km descent to the finish in Megève.

Unlike stage 13, there will be no cross winds to contend with on this individual time trial. Forecasted winds will be low throughout the day and should not provide any riders with an advantage or disadvantage over the others. Temperatures should remain in the low 20s and humidity will hover just about 50% so the conditions should be the same for most riders and will not have a significant impact between the early riders and the later General Classification riders.

This stage represents the best possible place for GC contenders to make time gains on each other. With race leader Chris Froome’s performance on Stage 17, it was evident that most GC riders are racing for the 2nd and 3rd on the podium. The only rider that has shown the ability to attack him, Richie Porte, has lost too much time early in the race due to his early mechanical issues. This time trial sets up very nicely for Froome, Porte, and even Tom Dumoulin who, while a bit heavier, has a high enough Functional Threshold Power (FTP) to compensate.

For this stage we are going to investigate potential bike choices for the riders and do a deep dive into the markers of a great GC rider and why Froome fits the mold of a perfect combination of power and weight for conditions experienced at the Tour. 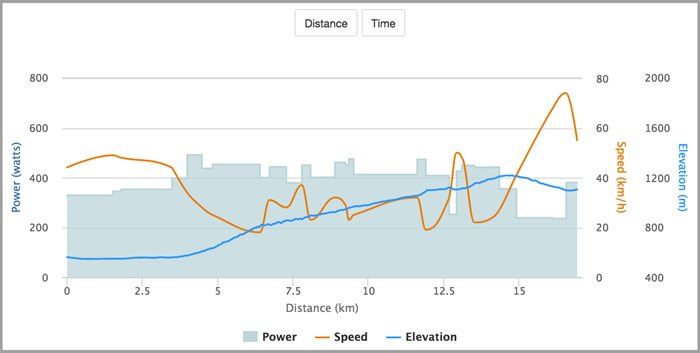 On first glance, you would think a traditional road bike would be best suited for a mountain time trial like stage 18. However, on closer inspection the answer is not as simple and is very rider dependant. A bike switch does not seem to make sense as a rider could at most gain 18 seconds using a time trial bike over the first 4km and changing a bike is risky with those slim margins.

A select group of riders who have high power and relatively lower body weight like Dumoulin could potentially benefit from using a pure time trial bike for the entire course. Aerodynamics will rule in the first 4km and the final 2km of the stage, but for many riders these gains would be canceled by the losses in the climbing sections. However, a disciplined rider who is comfortable riding sections under 5% grade in their aero position could stand to gain time with a time trial bike setup. A hybrid setup of an aero road bike with a time trial cockpit that allows for some aero positioning at the beginning and end of the course as well as the flatter sections between climbs could provide the best compromise and shave off 10 to 15 seconds for many riders. 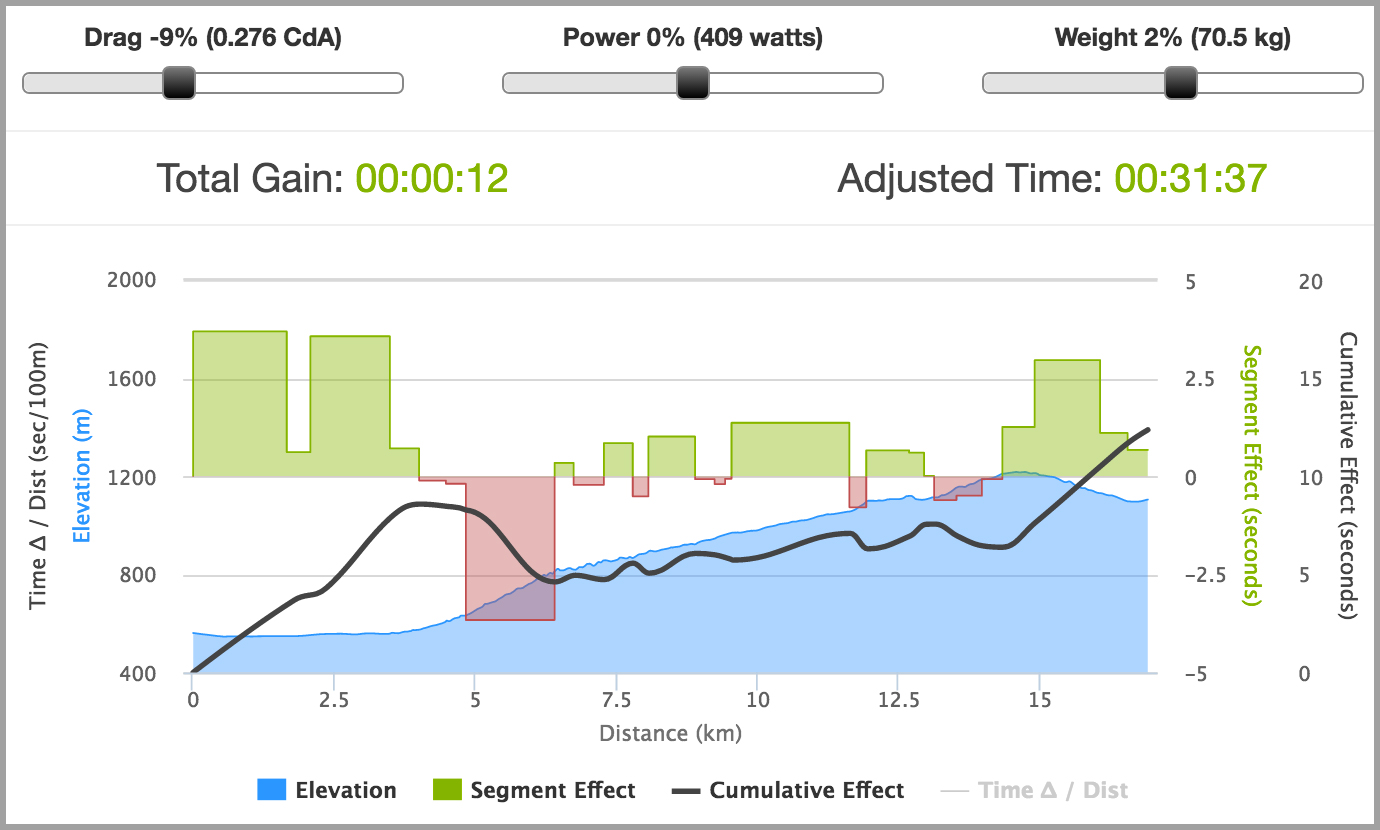 Instead of doing predictions for this stage, we decided to analyze whether there was such a thing as the ideal GC rider profile. If we look at rider Watts per kilogram (W/kg) is there something that stands out that could point to why Froome is so dominant compared to his rivals?

This year, Froome came into the tour at possibly the lowest body weight we have seen from him at 67.5 kg, but at his height, he still has over 9 kg on rival Nario Quintana. While we do not know the athletes’ specific power output for the race, we can assume via WKO4 that top GC riders will be pushing close to 6 W/Kg average for the roughly 30 min effort. Using that as a baseline, we looked at some of the top contenders in Froome, Porte, Quintana, and Mollema. Let’s break down the numbers assuming these riders are able to maintain 6.0 W/kg and that aerodynamics are roughly equal, both of which are big assumptions.

What is striking here is that Froome, at 6 W/kg on this course with these types of road gradients, has a natural advantage over the other GC riders listed. In contrast, riders larger than Froome, over 70kg, start to reach unsustainable raw power figures at 6.0 W/kg, with the exception of Dumoulin. This could help explain why Froome had some potential cracks in his armor in the past that we have not seen this year. To further analyze, we can look at what W/kg would be required for the other contenders to match Froome’s time riding at 6 Watts/kg.

So while the other contenders can push less overall average watts to match Froome’s speed, their W/kg numbers are higher and potentially unmaintainable, especially in the case of Quintana. With his higher overall raw power, Froome also has more bike options available on the stage than Quintana as there is a bit more wiggle room on the weight side of the metric. Sky may be willing to add a bit of weight to gain more time in terms of aerodynamics, whereas Quintana can not afford to add any more weight without losing additional time. Even analyzing the steepest sections of the course at over 11%, Froome at 6.0 watts/kg will gain a few seconds on his rivals while only losing a fraction of a second to someone like Dumoulin who would be pushing much higher raw watts.

Froome can be beaten as we saw in the Stage 13 time trial, but it will take a monumental effort from someone like Dumoulin who, at 71kg, and has a reported FTP of 440 watts, to do it. For GC riders that typically set themselves apart in the mountains, Froome sits in the ultimate sweet spot with a perfect balance of power and weight for the road grades and climbing conditions experienced at the tour.