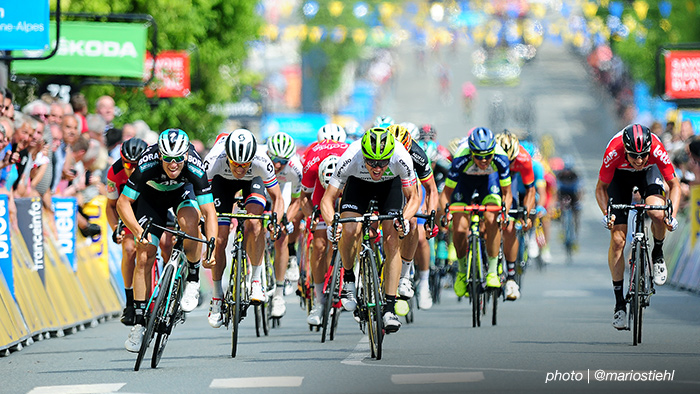 A Tour de France sprint finish is as exciting to watch as it is dangerous to race, with career glory on the line for the riders. Here’s how they prepare.

Find out how the teams train, and see files from the 2018 Tour de France here!

For a sprinter to prepare for the Tour de France is like baking a cake—but not one of those box cakes! It takes time, a few key ingredients, and a lot of patience. It also requires confidence that the process is going to pay off. That said, some cakes come out great, and some do not; it takes years to perfect the process. It’s easy to define the baseline demands of being a Tour de France sprinter, but becoming one is anything but simple.

The number one objective for a sprinter (on a sprint stage) is to make it to the last kilometer in the front of the race. In other words, the rider must get to the start of the sprint in a position to sprint—not in 100th wheel, not in a group off the back, and ideally not even in the front of the field if there’s a breakaway up the road. A sprinter must clear multiple hurdles before the actual details of the sprint matter. I call this huge part of the race “weathering the storm”.

It can be argued that the demands of every race are different. But on a simple physiological level, what a sprinter needs to “weather the storm” is the capacity to absorb 3000 to 4000 kilojoules of work, with large chunks of that occurring around FTP or lactate threshold. They also need to be able to handle some high intensity efforts along the way to stay in the field and to position for the final sprint. With the Tour de France, we also have to factor in that it is a 21-day race. That means recovery and an ability to handle the load day-to-day are paramount. Sprinters are going to be preparing not just for the demands of one specific day, but also for surviving the race.

When it comes to workout construction every athlete and coach is going to have their favorite potion of choice in preparing to “weather the storm”. Staying with the theme of keeping it simple, here is a baseline example of how a sprinter might prepare for the aerobic demands of a sprint stage, followed up by tapping into their speed for the finish: 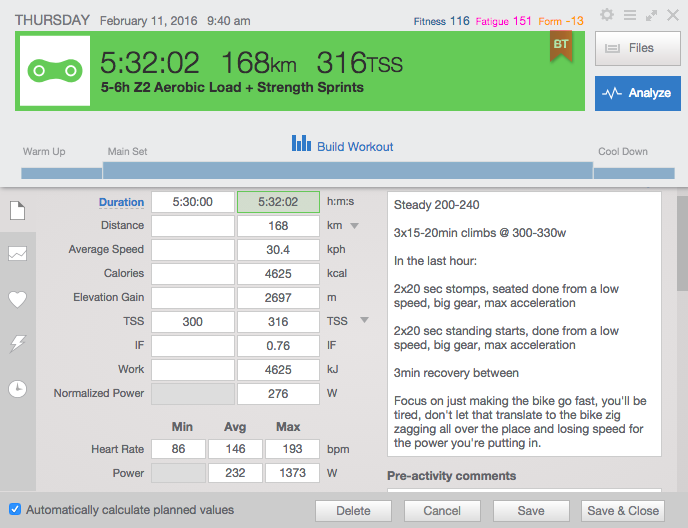 Boiled down: stay on the pedals, rack up some kJ’s, and sprint at the end. It’s also important to focus on good form under fatigue. This is the key: to make it to the race, and still be able to go fast. Certainly races vary, and there are further nuts and bolts it can be broken down into, but it’s also easy to lose the forest through the trees. So let’s make sure we’re seeing the forest before getting caught up in the trees. That is what “weathering the storm” is all about.

Once a sprinter has sat patiently in the field for five hours “weathering the storm”, it is time to execute the sprint, and hopefully win. The fundamental issue is that fifteen other riders and teams have similar hopes and dreams. Now we are into the mechanics of the sprint. In training sprinters may have all prepared really well, but the rider that puts out the highest peak power in the final 200 meters does not always win. The sprint goes way beyond training, beyond intervals and fitness. At the end of the day the mechanics of a sprint are about positioning, timing, a well-drilled team, and a lot of confidence to execute without hesitation.

There is a great article on TrainingPeaks already showing a deeper file breakdown of the final sprint of a TDF stage, but it doesn’t address the dynamics around the race.

To prepare for the mechanics of a sprint, athletes are not sitting at the computer figuring out what intervals they need to do. They are at races, building a team, and building their specific skills. Now, one could certainly counter that any rider contesting sprints at the Tour has built their specific skills pretty well or else they would not be there. That is a fair statement. However, racing is still king for preparation. Ability to “weather the storm” is the entry fee for starting the race, but time spent racing and dialing in sprint mechanics is how to win.

Training camp. Here the sprint train started to form up and do some specific lead out work – but without the stressors of actual racing
February: May include a stage race to build some of that general aerobic fitness before getting into the classics campaign. These stage races are also a great chance for the sprinters to test their sprint train in a race setting.

Probably saw some big objectives in the classics, maybe a Milan San Remo podium if things went well. As the Ardennes classics fired up in the second half of April, our sprint heavyweights were likely going into recovery mode. Then there might be a May trip to altitude as preparation for the Tour.

Another stage race for fitness, and to dial in the sprint train before the big show.

In conclusion – it’s a long process. Plus, with so many other teams jockeying for position, it comes with a high risk of failure. A Tour de France sprint may look like 200 meters, but in reality it’s months (if not years) long.

Unlock the power of individualized training. During the Tour de France only, download WKO4 for only $99. Use coupon code tdfwko at checkout.

About Nate Wilson
Nate Wilson is the owner and head coach of Catalyst Coaching. While balancing professional racing, with pursuing a Physiology degree at the University of Colorado, Nate realized that coaching was the perfect crossover between the two. Nate has been fortunate to work as the head coach and director for the USA Cycling U23 Road National Team. Nate enjoys the chance to apply his knowledge and experience to help athletes progress to their maximum potential.
Visit Nate Wilson's Coach Profile