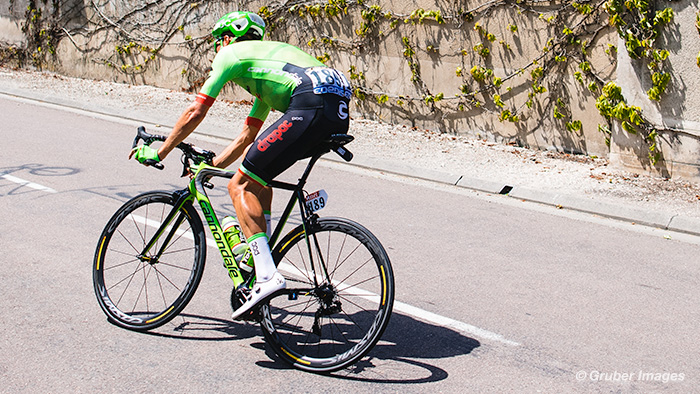 Stage 7 Power Analysis: A Rouler and a Sprinter Earn Accolades

An analysis of Dylan van Baarle’s aggressive breakaway and Alexander Kristoff’s sprint for the Green Jersey during Stage 7 of the 2017 Tour de France.

It was the last chance for the sprinters to take their chances before the Tour heads back to the hills, and the sprinters did not waste the opportunity. Marcel Kittel (Quick-Step Floors) continued his sprint dominance at the Tour de France, taking his third victory of the race in Nuits-Saint-Georges. But this time, Edvald Boasson Hagen (Dimension Data) came the closest to besting the German, forcing the judges to carefully review the finish photo before declaring Kittel the winner. Michael Matthews (Sunweb) was a close third.

Today we’ll be taking a look at van Baarle’s pivotal role in the breakaway for much of the stage, as well as Kristoff’s final big sprint into Nuits-Saint-Georges, where he managed another impressive fourth and secured his top-five spot in the sprinter category.

Van Baarle had another long day in the lead break as the Cannondale – Drapac team continued their aggressive racing in this year’s Tour de France. Van Baarle was on the attack from the start as he got clear with three other riders in the opening kilometre.

The four worked well together as the gap to the peloton opened up.

His stats for the first two hours

It was on the Côte d’Urcy 2.5 kilometre-long climb at 4.2 percent (category 4) after 147.5km that van Baarle had to push hard to keep the gap, it was here that his peak powers from two minutes to 10 minutes were made.

Stats for climb up Côte d’Urcy

Their day-long breakaway ended with 6 km to go as the bunch was moving fast on the approach to the line. Van Baarle’s aggressive riding awarded him with the most aggressive rider of the day prize and I expect this will not be the last time we see van Baarle in a Tour de France breakaway.

Click on the image below to see Kristoff’s Quarq Power File:

It was another chance for Kristoff to get onto the top step of the podium in what was one of the last sprint stages for a while. Kristoff was to the fore with his team doing a great job keeping him protected throughout the day.

The start of the race was again a relaxed affair as they conserved energy in this long stage. In the first two hours Kristoff rode at an easy normalized power of 211w, 2.79w/kg at a very low HR at 99 bpm.

This steady riding was broken at the intermediate sprint at the 108km mark. Here, Kristoff finished second in the sprint as he ffought to gain points in the green jersey competition. In the sprint he maxed out at 1156 w, 15.31 w/kg and averaging 867w, 11.48 w/kg for the 22-second effort.

The bunch was nervous in the last 20 km as there was the possibility of the crosswinds causing some havoc in the peloton. Fortunately this did not materialize, but it did make the pace high. In the run into the finish the Sunweb team where doing much of the pace setting with Kristoff and his team not far behind waiting for their opportunity to jump.

From 5 km to 2 km to go the average speed of the peloton was a staggering 61.6 kph hitting a max speed of 76.7 kph during this time. Kristoff averaged 314w, 4.15w/kg as he stayed on the wheels of his teammates.

With 2 km to go the team moved closer to the front as they jostled for position, from the 2 km banner to the 1 km to go banner Kristoff averaged 406w, 5.36w/kg at an average speed of 63.8kph.

With 1km to go it was all to play for as he was positioned perfectly and waiting for the Quickstep team to pull off before making his jump. In the last 400 m Kristoff had his final punch as he launched his sprint attempting to go over the top of Edvald Boasson Hagen.

This was enough to see him finish fourth and just miss out on a top three. This result also saw him move to fifth in the Green Jersey (Sprinter) rankings and kept his chances for the overall win in this category alive.

Van Baarle’s performances again show the aggressive stance the Cannondale – Drapac team are having in this race. This was his second long breakaway of the Tour and confirms his good form and his determination to give everything for a stage win.

I would expect van Baarle to again be to the fore on some of the hillers days later in the race when the bunch might not be so determined to bring a break back. This opportunity will be perfect for van Baarle to maximize his current form.

Kristoff produced another consistent result, but I expect he was disappointed to not have made a top three. With his peak power’s consistent throughout the Tour, hitting around ~1300w max on most sprint stages and with 20 to 25 second peak powers of 900-1000w, it is plain to see that his form has continued to grow and he will be looking for opportunities in the second week on stages 10 and 11 to take his shot at a victory.