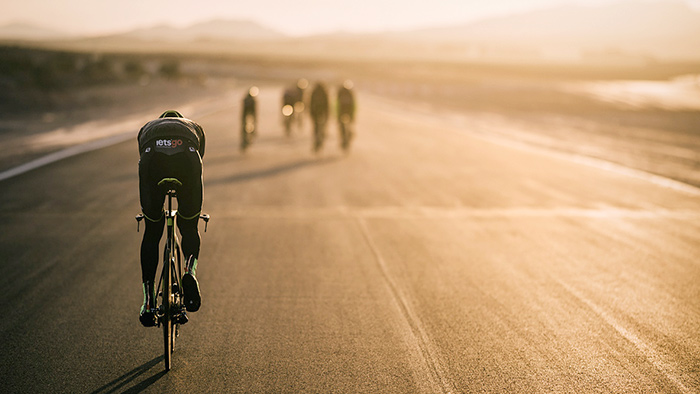 The time trial is one of the toughest and most telling challenges riders face in the Tour de France. Here’s how cyclists train to win the “race of truth.”

Find out how the teams train, and see files from the 2018 Tour de France here!

One of the most beautiful things about watching the Tour de France, or cycling in general really, is that it comes in all shapes and sizes. There are moments when the climbers, aka “the mountain goats” seem to defy gravity, racing to the top of the mountain…or they’re getting shelled out the back on a crosswind stage. Sometimes it’s the bigger, more powerful sprinters that are dominating. Other times, it’s the courageous breakaway that steals the limelight and races for the win. But what about the time trialists? Where do they shine and what are the specifics of their preparation for the race?

The individual time trial or, as the French call it, the race against the watch, is racing mano a mano! It is a cycling event where each rider rides the same course, setting off individually at time intervals so that they don’t get the aerodynamic advantage of riding with other riders. In fact, drafting behind a rider is banned. The rider who completes the course in the lowest accumulated time is the winner of the race.

The team time trial is a little different in that all 8 riders of each time start together and the time of the team is taken on the 4th rider crossing the finish line. Riders need to work together to optimize their speed and aerodynamics. Keep in mind that it’s up to 30% easier riding behind another rider.

Every Year is Different at the Tour de France

On July 7, the Tour de France will start in the town of Noirmoutier-en I’Île (oui oui, that’s quite a mouthful!) With an early team time trial (stage 3) the role of the time trialist at the Tour de France will be a little different than usual. Rather than standout individual riders, teams hoping to contest the GC will need power for the TTT, and strong support men for their GC riders through the flatter stages and mountains. They’ll be hoping to get as much of a time buffer as possible for their GC contender before the race’s last stage, which is an individual time trial.

In the individual time trial it is important for the rider to have a high FTP (what is FTP?) and a great power:CdA ratio (more on this later!). Coming at the end of the Tour de France this year and after a massive 200km stage in the mountains of the Pyrenees the day before, there will be quite a lot of fatigue in the legs of the riders going into the individual time trial. This fatigue places a great restriction of the performance being at FTP with very limited physical contribution above this.

How to Train for an ITT

Raising that FTP is crucial to perform well here, combined with being able to ride in a position of low aerodynamic drag. Two sessions that I prescribe for my riders preparing for an ITT are:

FTP touch session – 2x20mins with 4 x (3mins at 88-90% of FTP/2mins at 105% of FTP)/10mins recovery between each effort. This is designed to help reinforce the rider’s ability to hold aerodynamic position while under load. By backing off the intensity a little, you create more bandwidth for the rider to really emphasize holding their optimal aerodynamic position at pace.

The physiological demands and the training for a rider in the TTT are much more dynamic than an ITT. Instead getting up to FTP and holding steady power, it is required for the rider to push the limits of their VO2 system some 20% higher than their FTP for 30-60sec as they take their turn pulling the team. When they re-enter the paceline they’ll get 3-4 minutes at a sub-threshold aerobic range, which is a chance for them to recover before the next strenuous effort. Not every great TTT rider is as good an individual TT rider. These guys are more suited for  dynamic output, as opposed to the steady delivery of the individual event.

It is no fluke that we consistently see the same teams at the top of a TTT result sheet. Team Sky, Mitchelton-Scott, Team BMC and Sunweb are the top dogs—and they should be, since they invest the most resources into the event. The team time trial is like the Formula 1 portion of professional bike racing. It’s where the top teams show their scientific prowess and investment (or the lack thereof). These teams have the obvious manpower lining up, but behind the scenes they have also invested the most in the way of the aerodynamics of the riders, bikes and all of the equipment, as well coaching setup to hone the craft.

How to Train for a TTT

However, having a high FTP is still a component of this performance, so training efforts would be done to build that threshold. For more race specific preparation, I would give a rider a session such as this:

Alternatively, if you have a few mates out riding with you, start swapping off riding as hard as you can for 20mins or so!

Back when I was racing the World Time Trial Championships 15 years ago, I wouldn’t have classified my time trial bike as cutting edge. It had never seen a wind tunnel and weighed around 22lbs (10kgs)! Yet I managed to sneak into the top 10. The technological development of bicycle and equipment aerodynamics in these past years have now progressed so far that I would have finished many minutes behind the top tier using that same equipment. We are now in the age of the “super-bikes”!

When a bike race is going uphill, we are focused on watts per kg—how many watts the rider can put out relative to their weight. This metric works because gravity is the greatest resistance going uphill. But in a time trial, we are analyzing watts:CdA (aerodynamic drag) as this is the greatest resistive force to the rider going fast on flatter roads. In fact, in a highly biomechanically compromised (but aerodynamic) position, the rider will often go faster even with compromised power.

Correct pacing is essential in executing your fastest time against the clock. We now have tools at our disposal to measure physiological range, equipment options, the course, and even weather during the event. Literally millions of data points can be computed to produce an optimal pacing strategy. By utilizing the BestBikeSplit program, we are able to prescribe how the rider should apply their power during different segments of the course to produce their fastest time. When can they hold back and recover a little? When do they have to push hard to maximize their time gains? When do they really need to focus on being super-aero? The riders will start the race with this information in their mind and will use their experience and feel on the course to execute this pacing as optimally as possible.

As you can see, a lot of work goes into executing your best time trial. The correct physical preparation is important, but crucially so is optimizing aerodynamics and pacing strategies. Stay tuned during the Tour de France for some analysis of the time trial events.

Get advanced training insights tailored to your unique physiology with WKO4. During the Tour de France only, download WKO4 for only $99. Use coupon code tdfwko at checkout.

About Ben Day
As founder and head coach of DaybyDay Coaching, Ben Day brings his 20+ years of experience racing professionally and coaching of athletes, from beginners to the World Championship level, cyclists and triathletes. With success across an international stage, Ben and DaybyDay Coaching is focused on helping athletes achieve their optimal performance utilizing scientific knowledge, real world experience truly at all levels and strong connections with our athletes. Inspired by a desire to deconstruct the experience garnered from a professional career and scientific knowledge gained through education, DaybyDay Coaching was created to share this knowledge and help endurance athletes achieve their goals. Currently, Ben is preparing his riders for the Tour de France.
Visit Ben Day's Coach Profile
#ROAD