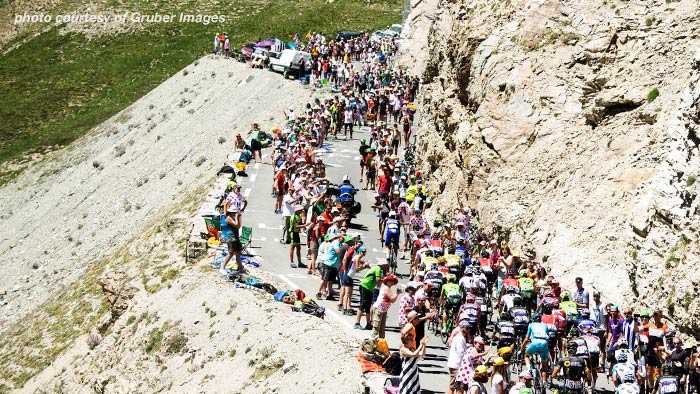 Stage 12 of the Tour de France was slated to finish at the top of Mont Ventoux. Due to the extreme gale force winds at the top of the climb, the course has been shortened by 6.5km. Ryan Cooper, the Chief Scientist of Best Bike Split, shows how the weather will affect the stage and explains the power needed for the top riders to take the win.

Stage 12 of the Tour de France was supposed to finish atop the venerable Mont Ventoux. A climb feared by many, this 15.7 kilometer ascent averages almost nine percent. Unfortunately, the forecast calls for extreme gale force winds at the top of the climb so organizers have shortened the stage by 6.5km. This means that riders will have fewer places to attack and try to gain back any time on leader Chris Froome.

Stage 12 of the Tour de France comes on Bastille Day and will be starting in Montpellier then travel northeast on fairly flat to rolling roads for nearly 112km before the climbs start. The first being Côte de Gordes at 4km long and an average of 4.8 percent grade and then Col de Croix Termes which is shorter at 2.5km, but almost twice as steep at 7.5 percent. These are just warm ups for the shortened finish on Mt. Ventoux, which now features a 9.5km climb with an average grade of around 9 percent.

In modeling out the stage, it is apparent that although the race has been shortened, it will still be very difficult. Take a look at the entire race plan that was used for this analysis, which includes additional features, metrics, and downloadable files. This analysis was performed by modeling the peloton as a single rider using front of the pack drag characteristics and pulling power targets. I have also run a model for the final 9.5km, where the real drama will likely play out. This model is based on a rider with a Functional Threshold Power (FTP) of 400 watts who weighs 69kg.

It’s going to be a windy day for riders across the whole course. It will be primarily a huge cross wind for the first 130km of the course. As riders turn north to the Côte de Gordes the cross wind will become an incredibly stiff headwind. Any breaks will have a hard time sticking on the way to Mont Ventoux. Riders will face strong gale force winds throughout the climb which has caused race organizers to shorten the course for riders safety.

Most of the stage will be building up for the last climb up Mont Ventoux. Any early breaks made with the strong cross wind will likely be caught well before the start of the Hors Category climb. The real fireworks will start in the last 9.5 km, where the grade kicks up to an average just under 9 percent. The model estimate has a possible time of around 30 minutes for the shortened portion of the climb. The quality of climbers in contention for the General Classification victory has never been higher, so multiple attacks could come at any time, pushing the pace and power throughout the climb. Froome will be forced to respond after really pushing power in the cross-wind inspired break during stage 11.

The one thing that could slow riders a bit is that there is a difficult individual time trial on the next stage. The time trialo course sets up on paper very well for Froome over his rivals, so power used pushing the pace hard on Ventoux to try for a couple of seconds over Quintana may be better used in the time trial to gain more time.

For the climb, Watts/Kg (W/kg) rules the day. If we break down the the difference in possible power of the top favorites based purely on the weight difference for the same climb time, you can see that despite the power differences, the W/kg are roughly the same. In this analysis, drag will not play as significant a role as the speeds are much slower throughout the climb. Below is a breakdown of what it would take for different riders to ride a 30 minute climb over the shortened 9.5km Mont Ventoux climb. 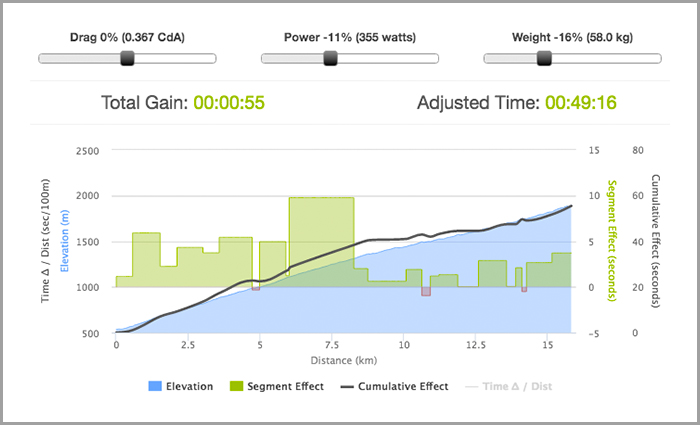 Regardless of the raw power number, these values will be really close to the rider’s FTP so expect riders to be on the limit the entire climb. According to the model, this seems to favor Froome over Richie Porte and Nairo Quintana, especially as he knows he can pick up some time in the time trial over Quintana.

Favorites for the stage include Chris Froome, Richie Porte, and Nairo Quintana.