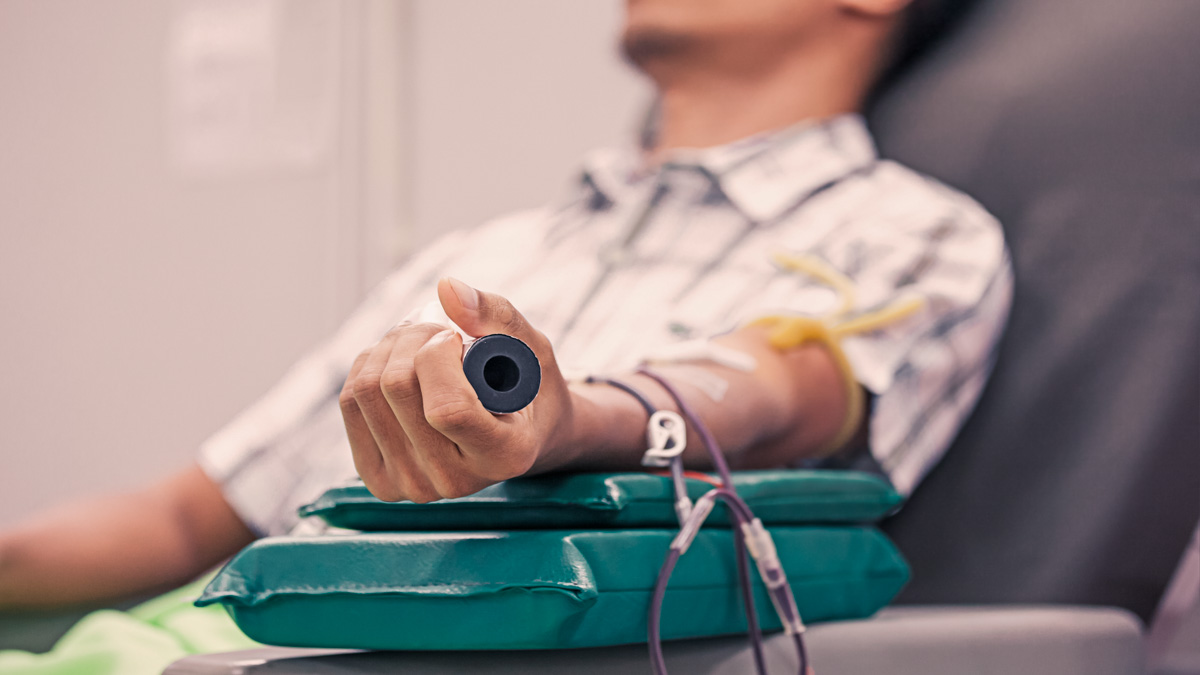 Donating blood is one of the single most important things you can do to help doctors. Here’s how you may need to adjust your training to do it.

Blood donation remains one of the most selfless and altruistic things a person can do. Despite the myriad advances by drug companies over the years, no drug has ever come close to accomplishing what our blood can do—and we remain dependent on the generosity of donors who take a half an hour or so to give up a pint (500 cc) of this incredibly valuable fluid.

After donation, whole blood is separated into component parts, so that each can be used for recipients who have specific needs. Red blood cells (containing the oxygen-carrying molecule hemoglobin) are separated and made into a unit of Packed Red Blood Cells (PRBC.) They can be reconstituted with saline and infused into patients with (or at risk of) anemia; like trauma victims, cancer patients, and patients undergoing major operations.

Platelets, which are the key to blood clotting, are also separated and saved. Various conditions can drop a patient’s platelet counts dangerously low, in which case bleeding can become an issue; platelet transfusions may be life-saving for them.

Protein-rich plasma is the fluid that carries and suspends all the other components of the blood. Plasma has many uses, and can be given to patients with various ailments from autoimmune processes like Guillain Barré syndrome or Myasthenia Gravis; or more recently, for patients with severe COVID-19, or related illness.

Experimental trials have begun exploring whether or not plasma taken from patients who have recovered from COVID-19 may be beneficial in treating those who are critically ill from the infection. The hope is that antibodies in the plasma of survivors could benefit very sick patients. This idea is not novel. In 1918 this procedure was attempted as a means of treatment for victims of Influenza and did show some promise. Similarly, in the 1940s, polio victims were also treated this way and again showed some benefits.

Whether or not plasma from COVID-19 survivors will prove beneficial in treating the sickest patients with Coronavirus infections remains to be seen, but even if it is not, the benefits of blood are invaluable in western medicine.

Each year, 45 million units of blood are donated at blood banks throughout the western world. These donations are only made by just 4% of the population. There are many reasons why more people don’t give blood, from fear of needles to a lack of understanding of the benefits of donating. For some, there’s also a perception that donating blood can have detrimental effects on health or performance.

Endurance athletes have long known that blood transfusions may enhance exercise performance by increasing hemoglobin concentration and allowing for improved oxygen delivery to the cells. Many athletes wonder then if donating blood can have the opposite effect, lowering hemoglobin concentration and thereby negatively impacting exercise performance. Over the years I have been asked many times if triathletes should consider donating blood as being incompatible with training and racing. Fortunately, there is a reasonable body of evidence on the subject that can help athletes make an educated decision.

Effects of Donation on Performance

After a typical blood donation, hemoglobin levels do indeed decrease by an average of seven-percent and remain depressed for at least 14 days after donation, when they have recovered by about half—to a four-percent decrease from pre-donation levels. Hematocrit, or the measure of what percentage of blood volume is made up of red blood cells, also decreases for the first few days after a donation. Hematocrit decreases by five-percent 48 hours after donation but has recovered by two weeks after the donation. This suggests that new cells have been synthesized in that two-week period but that those cells contain less hemoglobin than more mature cells.

Along with the decrease in hemoglobin, an associated decrease in oxygen-carrying capacity and delivery to the tissues is also seen, accounting for a measurable decrease in VO2 max (about seven-percent) in the 24-48 hours after donation. Interestingly, this decrease completely disappears by day three, suggesting that blood volume has re-expanded by that point, and that increases in heart rate may likely compensate for the decreased hemoglobin to restore oxygen delivery to normal.

Along with the decrease in VO2 max, measured maximal exercise capacity as well as time to exhaustion when performing at threshold also decrease by about 10 percent and then recover by one week. Submaximal efforts have never been effectively been studied so no clear conclusions can be made about efforts in that range after blood donation.

Taken together, these findings suggest that blood donation is indeed associated by a measurable decrease in exercise performance, principally at the highest levels of exertion. This effect is maximal for the first two days after a donation and has disappeared by fourteen days after donation.

This information may help in guiding endurance athletes’ decisions if they are considering the selfless and ultimate altruistic act of donating blood. Blood donation is compatible with endurance training—athletes need only incorporate such donation into their schedule so that they do not have high-intensity training for several days to a week afterward. They certainly should not do so within two weeks of a race.

The satisfaction gained from the knowledge of having helped others should be more than sufficient motivation to arrange one’s schedule in order to make blood donation possible.