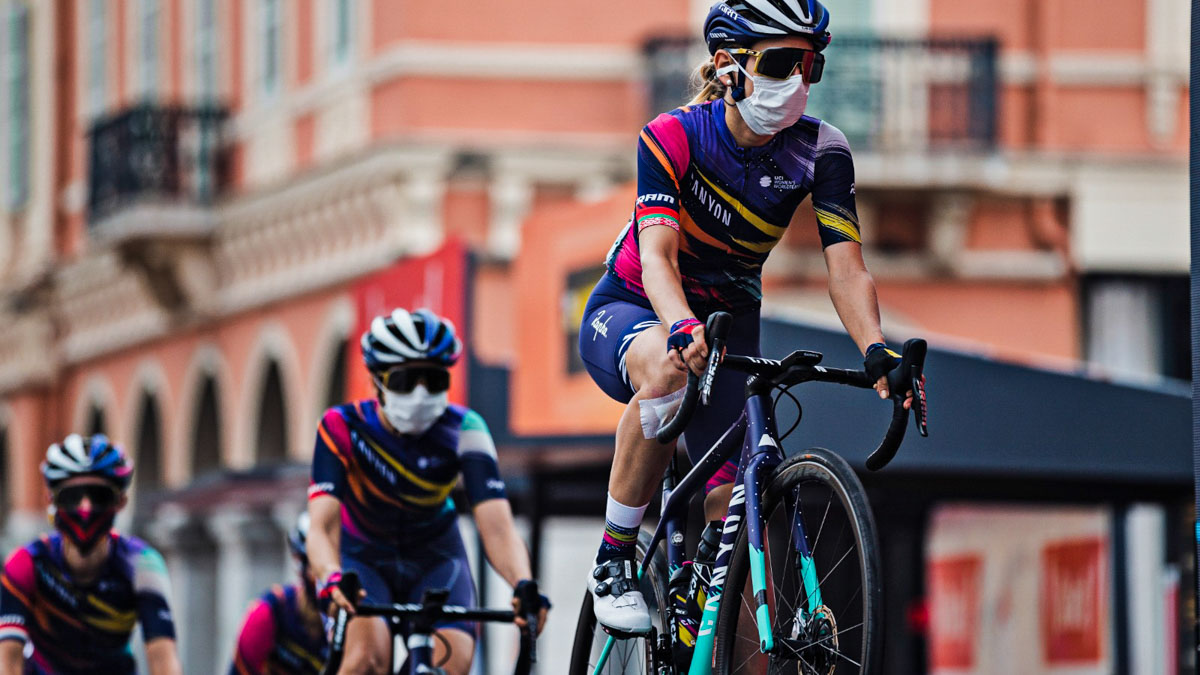 The 2020 La Course route headed to the South of France and foothills of the Alps in Nice. The route consisted of 96km over 2 laps around a hilly circuit, which started with a bang on the Côte de Rimiez, 5.8km at an average gradient of 5.1 percent.

Riders continued climbing up to the town of Aspremont before descending to a 25km flat, and arriving back in the city of Nice. With two times up the Côte de Rimiez and the long drag over the top, this was a perfect course for the climbers and, as Canyon-SRAM’s Kasia Niewiadoma showed, also an excellent opportunity to showcase some formidable descending skills.

Kasia Niewiadoma continued her strong return to competitive racing after race delays due to COVID-19. After a 3rd place in the recent European Championships, Kasia was back with her Canyon-SRAM team, showing her supreme climbing and technical talents among a strong lead group over a hard-fought 96km.

The pace was aggressive from the start, with only 2km from the start line to the bottom of the first climb. Teams like Trek-Segafredo and Team Sunweb set a hard pace approaching that first ascent. These high speeds early in the race saw many riders dropped in the opening kilometers, while the main favorites stayed close to the front of the peloton.

The effort on this climb saw Kasia riding at a solid effort of 264w, 5.23w/kg to maintain her position in the main group.

Over the top of this climb was only a short respite before the riders tackled an uncategorized climb lasting 6.67km at 2.9%. The pace continued along this drag and Katarzyna maintained that high tempo, averaging 238w, 4.71w/kg for nearly 13min. This pace was not high enough to cause any significant splits in the lead peloton, but it did make sure that any riders dropped on the previous climb did not regain contact.

Kasia led the peloton down the first descent, hitting a max speed of 66.1kph—enough to cause a split in the front of the peloton and allowing the leading group to gain a gap of over 20sec by the time they hit the long flat roads on the return back to Nice. This group worked well together as they headed back towards Nice, but the peloton was not willing to give this break any advantage. They were caught just on the approach to the second lap.

The start of the second lap was always going to be hard, and with all the main favorites still remaining in the large group of 40 riders, fireworks were expected as they hit the Côte de Rimiez for the second time. It was in the opening kilometer of the climb that the current world and European Champion Annemiek van Vleuten (Ned) Mitchelton-Scott set a blistering pace, forcing another selection including not only Kasia, but Lizzie Diegnan (Gbr) and Elisa Longo Borghini (Ita) of Trek-Segrafredo, Demi Vollering (Ned) of Parkhotel Valkenburg, and the legendary Marianne Vos (Ned) of CCC-Liv. Kasia’s ability to follow a big move by the Dutch rider and make a second break showed her excellent fitness and determination to be part of the select group fighting for the win.

The pace did not let off. Perhaps motivated by a strong chasing group led by Team Sunweb (who missed the split), Annemiek continued to pry open the gap, leading the group at over 5w/kg on this 5 percent gradient.

Over the top of this climb the leading group, including Kasia, had an advantage of 50 seconds over the chasers. The pace was still being set by a steaming Annemiek van Vleuten, who appeared to be trying to ride the whole group off her wheel by forcing a pace to high for anyone else to hold. Kasia and the other five riders were undeterred—though Kasia put out an impressive power on the long drag:

This effort spiked after Lizzie Deignan attacked on the final climb to Aspremont. Kasia was quick to react, which meant a high burst of 14sec at 469w, 9.29w/kg to jump onto the British rider’s wheel.

The overall effort during the period from the bottom of the Côte de Rimiez to the top of the Aspremont climb was a great insight into high aerobic powers from the elite women’s Peloton. This section lasted nearly 28min and covered 13.7km, and Kasia had a normalized power of 265w, 5.25w/kg during this time, with her HR averaging 178bpm and peaking at 190bpm. With sustained efforts at or above 5w/kg, this is again a great insight into the real talent and high level of professional women’s cycling.

The final run into the finish was done with good cooperation within the leading group of 6 riders, as they still had a group of 20 sitting just over 1min behind. The attacks from the leading group would start in the last 2.5km, with Elisa Longo Borghini and Annemiek van Vleuten both attempting to thin the group with small surges. This meant a very strategic last 2.5km of racing, which each rider looking for her opportunity to get an advantage.

As the leading group passed under the 1km banner, Annemiek van Vleuten made her last bid for victory with a big attack. Kasia, who had been marking the world champion, was the first to react and jumped straight on her wheel. This effort required 15sec at 555w, 11w/kg, but was not enough to put significant distance on the other riders—which meant a group sprint to the finish.

In an impressive show of teamwork, Elisa Longo Borghini launched one final, massive attack, forcing Marianne Vos (Ned) CCC-Liv to start her sprint a desperate 300 meters from the line. Vos would ultimately lead Borghini’s Trek-Segafredo teammate Lizzie Diegnan to an exciting photo-finish, and the victory.

The drawn-out sprint wasn’t ideal for Annemeik or Kasia, although she did hit her peak 30sec power for the day at 504w, 9.98w/kg en route to 4th place. These are impressive numbers for having spent much of the race in a breakaway—it was an unlucky finish right off the podium, but an amazing performance nonetheless.

In what was an impressive display of fitness from Kasia during a hard La Course race, showing her consistency at fighting it out for victory in the world’s top races.