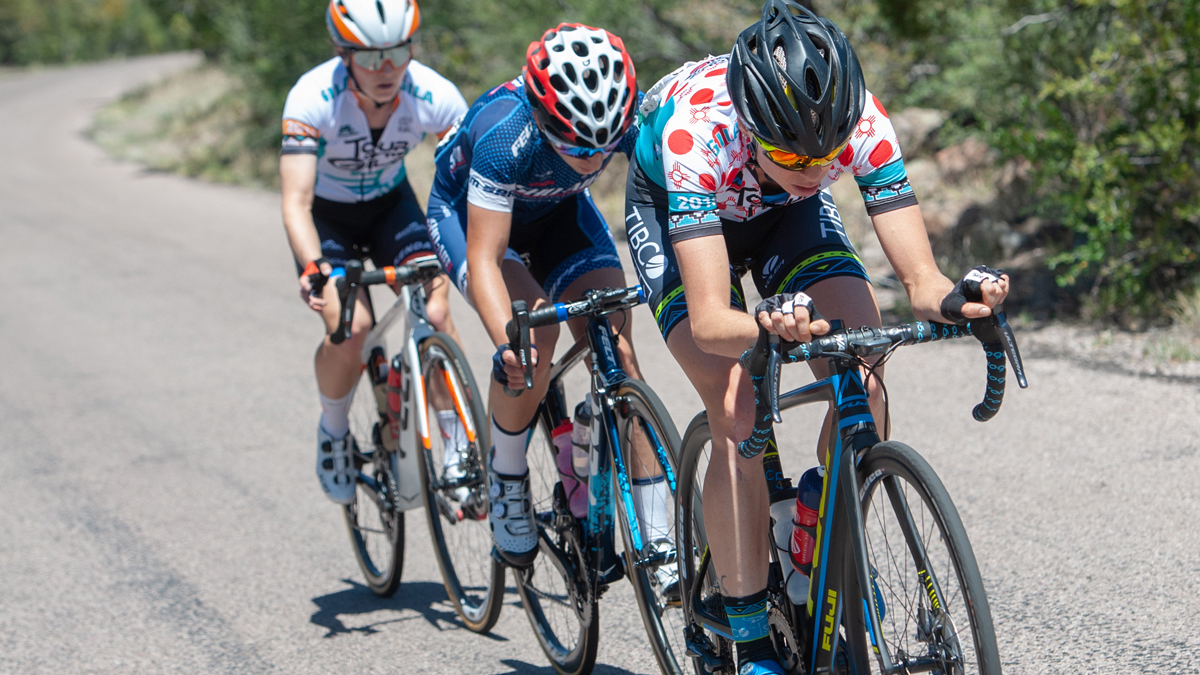 Photo: Tour of the Gila

The demands of the Tour of the Gila are unlike many other races. Not only must riders contend with high temperatures in the New Mexico mountains, but they also face long climbs and high altitudes. Some of these factors played to Australian Brodie Chapman’s strengths—she excels in the mountains and heat—but she also came directly to the race from the lowlands of Belgium.

With altitudes ranging from 1600m to 2300m (~5000-7500 ft), the riders who are conditioned to thin air are usually the ones who excel in Silver City. It’s normal to see a drop of 10-20% in Functional Threshold Power (FTP) at heights of 1500m to 2200m—but the amount of aerobic power a rider will lose is dependant on their altitude conditioning prior to the race.

In Brodie’s case, the power-sapping effects of altitude would have been maximal. She had virtually no acclimatization before this race, making her result even more impressive. Heres how the intense five-day race played out:

The start of the first stage was done at a steady pace, with the notorious Mogollon climb looming in the final 10.8km. For the first 106km, Brodie held a comfortable 139w normalized power (2.4w/kg), despite several riders going for the intermediate sprint points before the final climb.

The final climb of Mogollon was where the real racing began, and where Brodie and her teammates put their plan into action to go for the stage. For the full duration of this climb (29:06min) Brodie averaged 231w, 4w/kg.

At this point, the riders were approaching 2000m of altitude, yet Brodie showed no weakness, continuing at a consistent at 250-260w, or 4.31 to 4.5 w/kg. Then, in the final kilometer, Brodie put in a bigger dig of 275w, 4.74 w/kg for just over 4min. This was enough to drop the few remaining riders in the chase group and catch the lone leader. This massive punch was enough to get her the stage win and the overall lead.

The start of stage 2 was hard; the first hour was done at a high tempo with a normalized average power of 214w, 3.7w/kg. Much of the early aggression and pace-setting was due to an early climb (Pino Altos) which the riders tackled after only 18km of racing.

Yet perhaps these early efforts were too costly; ultimately the race was to come back together, and a select group clipped off the front, including eventual stage winner Heidi Franz (USA) Rally UHC Cycling. Crucially, Jasmin Duehring (Can) Sho-Air Twenty20 came second on the stage, taking the overall lead.

Brodie made another big push as part of the chase in the final 26km, producing a normalized power of 197w, 3.4w/kg, for the final 50min. Unfortunately, this effort was not enough to pull the leaders back, and meant that the following stage’s TT would be even more crucial in the overall GC fight.

In Stage 3 the pressure was on for Brodie to regain some time on her main rivals, and the data shows her fighting hard to get back on top during this long and hilly TT. With some long climbs (for a time trial), and a very fast run into the finish, pacing and effort management were crucial. Only those experienced time trialers who could use their power in the right places could top the leader board, and Brodie’s performance is even more impressive considering that this was her first time using a Time Trial bike in an Individual TT.

When we spoke to Brodie about her pacing strategy for the TT she said that the performance was done on feel, rather than watching watts;

“I just really stayed positive, told myself to breathe and that my legs felt good. I felt pretty pumped on the speed I could get! I aimed to maintain momentum over the climbs so I could keep speed up for the descent. At the end of the day, the fastest person wins!”

Over the top of this climb, it was 7km to the finish with most of it slightly downhill. Brodie’s power dropped down to 203w, 3.5w/kg here before the final push into the line. In the last 2min of the stage, she hit nearly 70kph and an impressive 300w, 5.2w/kg, with her HR hitting a peak of 189bpm.

Overall this was an exceptionally well-paced effort, especially as it was done on feel rather than a strictly targeted pacing strategy. Brodie’s power distribution on the climbs and downhills masterfully maximized her speed for the duration of the entire course.

It was a 25-lap race for the time bonuses in Stage 4, and Brodie lost her GC place by just one second to Chloe Dygert (USA) Sho-Air Twenty20. Dygert’s aggressive racing earned her not only the overall race lead but the stage win as well.

The circuit consisted of 4 corners and one short climb around the back. The part of the circuit which caused the most damage was the final downhill corner into the finishing straight, with anyone sitting too far back having to make a big effort to regain a good position before the next corner. It was sprinting out of this corner that Brodie hit consistent peak powers of 600-650w, 10.3 – 11.2 w/kg on almost every lap.

This meant a high-powered effort of 5-10sec was required every 2min of the race, just to maintain position. With very little recovery, this was exceptionally powerful racing for Brodie, who is more at home on the long climbs. She may have lost the leader’s jersey on the day, but she kept the gap small enough to remain a threat for the final stage.

With such a close race, the 5th and final stage was always going to be a showdown for the GC. Fortunately, the mountainous terrain would prove excellent for Brodie to produce her final strike, taking the overall victory and the stage win as well.

As in previous stages, the racing was hard from the start with a time bonus sprint at just 13km, and the first climb shortly afterward, at 17km. With time bonuses potentially playing a massive role in the race, it was important to be to the fore at this point—and it was during this first sprint that Brodie hit her peak 1min power (351w, 6.05w/kg), and 30sec power (365w, 6.3w/kg) for the day.

On the first climb, a group went clear and gained a few minutes advantage over the peloton, which included the race leader and Brodie. But on the 4.8km climb with 28km to go, Brodie and her team made what proved to be a decisive move. This allowed Brodie to hit the lower slopes of the climb full throttle, pushing her rivals into the red with a big 2min effort of 292w, 5.03w/kg. Over the entire 16min climb, Brodie pushed an average power of 252w, 4.34w/kg, not only dropping the yellow jersey but catching the entire leading break.

Still, there were only a handful of seconds between Brodie and current GC leader Chloe Dygert (USA) Sho-Air Twenty20 going over the top of the climb. With 23km remaining in the race, this meant a long push to the line.

Brodie had a normalized average power of 223w, 4.01w/kg, for the final 23km, as she fought every inch of the road for nearly 40 minutes to open her advantage over the hard-chasing Chloe Dygert. Brodie’s efforts extended her lead over the 4km climb up to the finish, with a huge 257w, 4.43w/kg dig in the final 8min of the race.

This final effort was enough to crack the chasing groups, earning Brodie both the stage win and the overall jersey. Notably, it was during the intensive last 32km that Brodie set her peak 60 min power for the entire race (217w, 3.74w/kg), a true accomplishment at the end of five tough days racing in the mountains of New Mexico.

About Stephen Gallagher
Dig Deep Coaching is a global coaching company that works with athletes of all levels across the following disciplines: road, track, cyclocross, MTB and triathlon. Whether you are taking part in your first ever gran fondo or aiming to compete in the professional peloton, Dig Deep Coaching can help you out. Get in touch via email or follow Dig Deep Coaching at Facebook Twitter and Instagram Sign up to our Mailing list and get 3 FREE crucial Sportive workouts and much more Training and Racing information. Register HERE
Visit Stephen Gallagher's Coach Profile
#CYCLING