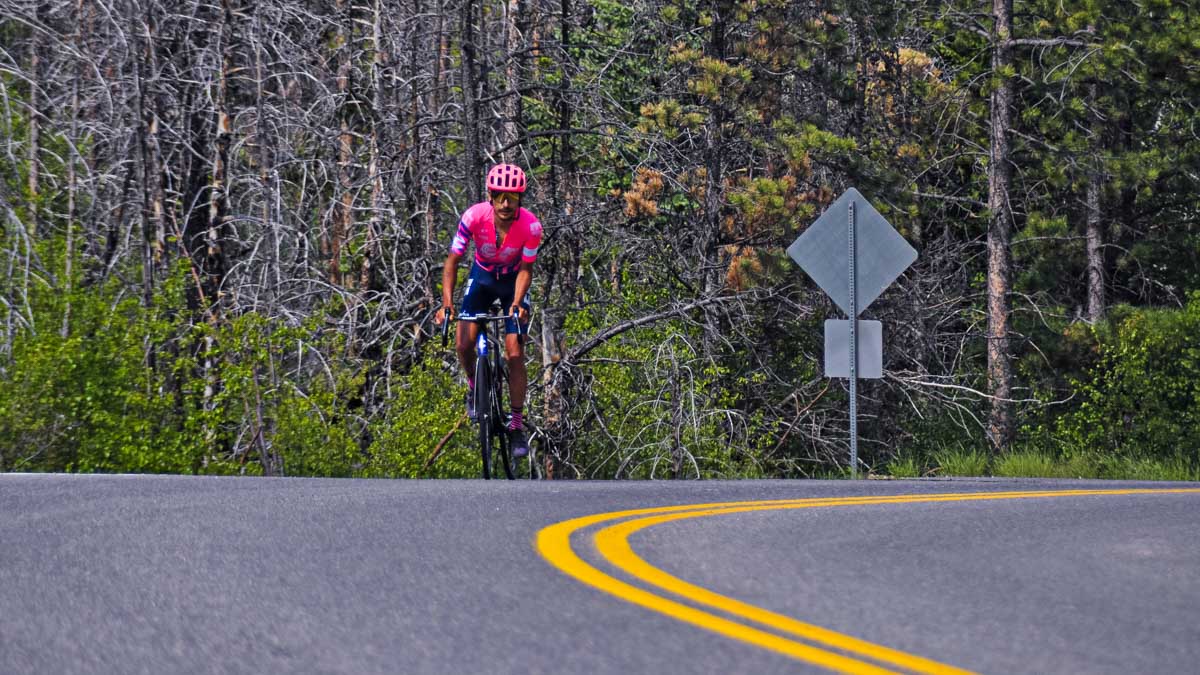 With no races on the calendar, 2020 made the word “Everest” a verb among cyclists. Check out Lachlan Morton’s record attempt.

Last Saturday, EF Education First Pro Cycling rider Lachlan Morton set a blistering pace over 42 reps of the Rist Canyon climb in Colorado, in his attempt to break the Everesting world record of 7 hours, 40 minutes set earlier this year by mountain biker Keegan Swenson. Although Lachlan finished in a record-breaking time, his attempt has since been discredited due to a discrepancy in the elevation data. Still—it was a massive day on the bike. Here we’ll take a deep dive into his data and the demands of this epic challenge.

For anyone who is unfamiliar with Everesting, it is an attempt to gain the same altitude as the height of Everest (8,848m or 29,029 feet) by repeating a single climb. This insane challenge has been attempted by plenty of cyclists over the years, but has gained particular interest during the COVID lockdown as pro racers look for challenges outside the typical race calendar.

This sudden interest in Everesting has resulted in a fast and furious rush to break and re-break the world record, and some seriously impressive times. To put it in perspective, the pre-COVID Everesting record, held by Tobias Lestrell, stood at 8 hours and 46 minutes since 2017. Retired road racer Phil Gaimon set out to break 8 hours early in the quarantine, and succeeded with a time of 7 hours, 52 minutes. Swenson would break that record just four days later. The women’s record has faced a similar onslaught, changing hands seemingly every week. It currently stands at 9 hours 57 minutes, set at the end of May by Lauren De Crescenzo.

How long will the latest record stand? There’s no telling, as races continue to face cancellations and postponements and pros (presumably) get increasingly stir-crazy. The one thing we do know is that it will take a huge effort to beat.

What it Takes to Everest

Two major factors needed for a successful Everesting attempt are to have an endurance engine big enough to handle extensive time on the bike; and the ability to climb efficiently on the steeps. Both these traits are not easily combined, unless your name is Lachlan Morton.

Lachlan is unique in that he is not just a top-level World Tour cyclist, but also regularly participates in ultra-endurance events such as Dirty Kanza, Leadville 100, and GBDuro. In fact, just a little over two weeks before his Everesting attempt, he set the new record on the Kokopelli trail—an ultra-endurance classic from Moab, Utah, to Fruita, Colorado.

The physical ability to sustain a high work rate is one thing, and the mental capacity to maintain focus over 7-10hrs is another—and can be the downfall of even the most talented of riders. No doubt the experiences gathered from Morton’s unique competitive calendar and subsequent challenges on the bike gave him an edge.

The first step in Everesting is choosing the right climb. Recreational riders might look for a good place to park a support vehicle or a nice view, but a record attempt is all business.

The ideal pitch for a record allows for quick altitude gains (meaning it has to be steep), along with a descent that requires minimal to no braking, i.e. as straight as possible. The quicker the descent, the quicker you can start the climb again; and the quicker you start the climb again the faster you will complete the challenge. Lachlan decided to use the climb at Rist Canyon, which is a 1.93km climb with an average gradient of 11.4%. This climb is also basically straight, so no braking would be needed on the descent, allowing for faster repeats.

The other big factor is altitude. This climb starts at an altitude of 2,225m (around 7300 feet) and tops out at 2,468m (around 8,100 feet). With less oxygen availability at altitude, it can be difficult for the body to recover, so avoiding going ‘into the red’ is key. Overall power output also tends to decrease as altitude increases.

However some studies show that, despite the physiological challenges, there is little negative effect on overall speed at altitude, and in most instances speed is actually higher than at low altitude, likely due to decreased resistance from air density. It is for this reason many track world record attempts are done at altitude. With the benefit of extensive physical acclimatization (Morton lives in Colorado) the altitude on this climb could actually have been an advantage.

It may seem like a rigid pacing plan would be the recipe for success in a situation like this, but as with any ultra-distance event, your ability to tune in to how your body feels is crucial. Here is what Lachlan had to say about his pacing:

“I don’t train off power so I’m pretty in tune with my feelings. I was carrying a bit of fatigue going in, so I knew I wouldn’t be feeling amazing, so I just tried to make the most of the legs I had on each lap without going crazy.’’

As we get into the analysis you’ll see Lachlan’s ability to sustain his effort while balancing the environmental and physiological challenges. We broke down his ride into 4 distinct sections to show his pacing and the comparison of effort and speed/power during the 7 ½ hrs of riding.

We split his ride into reps of 10 for the first 3 segments and then the 4th segment was his last 12 reps. Each segment lasted from 1hr 45min up to 2hrs 12min for the last 12 reps. Within each segment we looked at his average time for the ascent over the 10 to 12 reps, his average power for that segment along with his average VAM (VAM is a calculated mean ascent velocity).

Looking at the temperature and gaining some headway prior to heating up allowed Lachlan to maintain some fast, consistent ascents without overreaching. It is also worth noting that his cadence was consistent all the way through the attempt; between 60-65rpm for most of the hill reps.

Coming to around 2hrs, the temperature was starting to increase. While we can see a slight drop to his average climbing time on each rep (around seven seconds) he maintained a constant power output around 300w, 4.75w/kg for each rep.

Coming into the halfway point, the pace started to dive slightly. His average time on the climb went out to 9min 6sec. Still, with only a 0.3w/kg difference between the first segment and into his third segment (even after 5 ½ hrs in the saddle) it is a testament to his massive aerobic engine. Here is what Lachlan said:

‘’I can hold a decent pace under pretty heavy fatigue if my head is right, so I tried to use that… The legs you have at that moment are all you have to work with so it’s about optimizing what you have at that point in time.’’

It is no surprise that the last segment (the final 12 reps) showed the lowest average climbing pace. Keep in mind, these laps were done between 5 ½ and 7 ½ total hours of riding, and again, his average climbing power only went down by 10% from his first segment to his last.

Any athlete who has completed in ultra-distance events understands how difficult it is to maintain such a high and consistent work rate, especially when you’re deep into fatigue and the engine is running dry. Here is what Lachlan has to say about getting through it:

“I knew at that altitude and with the increasing temperature the last half would hurt no matter what so there’s no point holding back a bunch thinking it’ll help. It was more just wait for that discomfort to come and then lean into it.”

This was a massive challenge and another one to add to a list of epic adventures which Lachlan Morton has undertaken in recent years. Will we see another attempt from Lachlan this season? We’ll have to wait and find out!