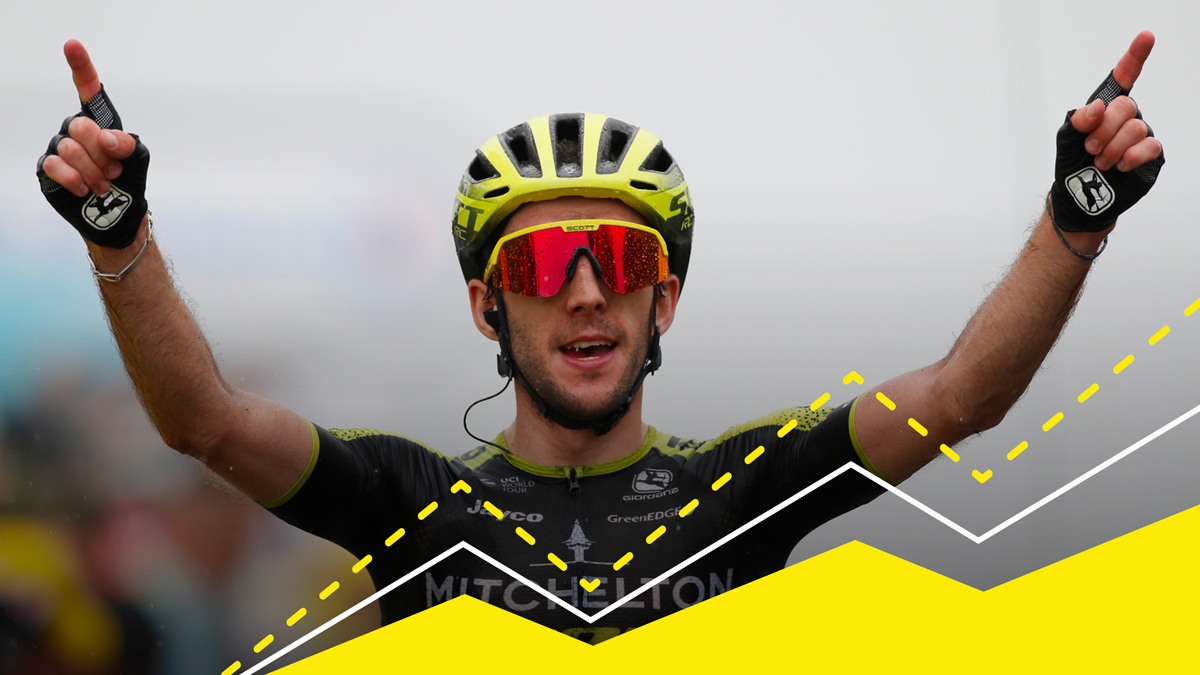 Simon Yates of Mitchelton-Scott made a mark on the 2019 tour, winning one of the most dramatic stages yet in decisive fashion.

Stage 15 was the last day in the Pyrenees, and the last opportunity for the GC riders to gain as much time as possible on their rivals before the last rest day. Not only was this stage a big focus for GC riders, but it was also a perfect course for a breakaway to stay away, allowing the right climber take a stage win. This dynamic, combined with a third day of punishing terrain made for one of the most exciting and hard-fought stages in recent memory.

Michelton-Scott’s Simon Yates targeted this day specifically, and delivered a fantastic ride on the final climb, going solo and winning the stage despite a strong chase from a storming Thibaut Pinot. Stage 15 was a truly epic day in the high mountains.

We are very fortunate to have rare access to a Stage winner’s power file, and one which shows the massive talent needed to win a mountain stage in the Tour de France. Simon Yates is known as one of the best climbers of his generation, and this data proves that out.

As many riders noted after the stage, the opening 50km were extremely hard and fast. With many teams vying for a stage win or GC placement, it took a long time (52km) for the peloton to eventually ‘allow’ a serious break to get a gap. The break that was to be the main player for most of the stage only formed at the bottom of the first categorized climb of the day; the Cat 2 COL DE MONTSÉGUR.

The intensity of this opening 52km can be seen in the data from Simon and EF Education First’s Tanel Kangert. Simon was very active, trying to follow every big move and pushing to get a gap on the peloton. Tanel, who had a different job for the day, was staying within the peloton to make sure his team leader Uran wouldn’t miss any potential splits involving GC riders. Despite their different roles, this opening section was a significant effort for both riders, as you can see below.

It should be noted that this data doesn’t necessarily reflect one VERY hard section after 34km of racing when a big split happened (which Simon was part of). This hard section is where both Simon and Tanel did their 1 minute and 2-minute peak powers:

The break of 28 riders (including Simon) finally managed to forge ahead on the Cat 2 COL DE MONTSÉGUR. This breakaway had many quality climbers, and they worked well together, eventually gaining a gap of 3+min en route to the first big climb of the day; the Cat 1 Port de Lers.

This is where the break was formed, on the hard bottom section of the climb. Simon did 3 minutes at 373w, 6.28w/kg here. He also hit his peak speed on the descent after this climb: 85.7kph.

Note the difference of speed and time, as well as power output back in the peloton. Tanel was far from softpedaling, but you can see how the break put time on the peloton in this section.

On the long drag towards the next climb, the break began to lose riders who couldn’t sustain the pace. It’s easy to see why; over this 14.1km section, from Tarascon to the town of Vicdessos (the foot of the climb), Simon averaged 246w, 4.14w/kg, and 40kph. The group ultimately hit the climb in two parts; 16 riders (including Simon) were slightly ahead of the 12 who had dropped off. Tanel Kangert was safely at the head of the peloton and riding in the top 20 on most of these climbs.

Many riders dropped from the initial large break on this hill. The bottom section was taken at a slightly higher pace with the first 2.85km covered in 8:41min at 332, 5,59w/kg.

Back in the bunch, the pace was mildly less punishing.

The leading break still had an advantage of 3 minutes and 45 seconds approaching the third climb of the day. This was where they would encounter the steepest gradients of the stage; the Col de Peguere was a very intense 9km with pitches up to 14%.

On this climb, both the break and the peloton brought the intensity up a notch. Simon Geschke (CCC Team) made the first big move, leaving his fellow escapees behind, including Simon Yates. On the final 1km to the top of the climb, however, Simon spotted an opportunity to jump clear of the greatly reduced break, and bridged across to Geschke. This effort required a big 20sec effort of 504w, 8.48w/kg, before Yates “settled” into a 401w, 6.75w/kg pace for 3:39min. This was enough to drop the break and bridge across to Geschke just as they crested the top of the climb.

It wasn’t just in the breakaway that the pace was starting to ramp up; back in the Yellow jersey group Astana and Movistar began a concerted effort to decrease the deficit to the leading group. It was on the steepest section of the climb with around 4km to the top that Movistar’s Mikel Landa made his move to break clear of the yellow jersey group and try and bridge to the leaders.

The pace within the peloton was very high at this point, as we can see from Tanel’s data. It was in the middle section of this climb that Tanel set his peak powers from 5min to 20min. His peak 6min power was a very hard 425w, 6.42w/kg on the 14% gradient. And for good reason; Tanel was riding on the shoulder of the Yellow jersey at this stage, working hard to keep Landa within reach. The peloton actually rode this climb over 90 seconds quicker than Yates; it’s easy to see why the bunch was reduced to a select amount as they crested the penultimate climb of the day.

On this climb Tanel was at the front of the Yellow jersey group, which at this point was actually moving faster than break. Astana set a high tempo before the steep section, and the Landa attack further provoked the group.

The final climb was set to be a big showdown after an already exciting day, with Simon Yates and Simon Geschke speeding together into the town of Foix before the final climb of the day. Both Yates and Geschke worked hard to maintain a gap over the very fast chasing grupetto, which Landa was close to joining.

Simon covered the 27.3km down to the bottom of the last climb at an average speed of 56.7kph and at a normalized power of 278w, 4.67w/kg. This high pace allowed both leaders to start the final climb with an advantage of 1:37min over the leading group, which at this point Landa had caught.

The finish was on top of the Cat 1 FOIX PRAT D’ALBIS, a killer 10.4 km at the end of a very hard 185km day. At this stage, the riders had already dealt with a very intense 4hrs+ of racing, on top of three very tough days, and the fatigue was plain to see on the faces of many riders on these final slopes.

Not so for Yates, who rode the bottom 1.9km of the climb with Geschke at a solid tempo of 327w, 5.5w/kg for 4:42min. Despite pushing their highest pace yet, it would not be enough to stay clear of a fast-approaching chase group—a fact which was no doubt relayed to Simon on race radio.

It was only in the last 1.7km of the stage that Simon’s efforts showed any signs of fading, perhaps with the knowledge that the stage was his, or perhaps due to pure fatigue. Simon rode this final kilometer and a bit at 313w, 5.27w/kg.

An impressive effort from Kangert as well.

This was a truly world-class performance by the British rider, made even more inspiring by the hard riding that preceded it. It was also the third stage win for Mitchelton-Scott in this year’s tour. With Simon’s condition apparently on the upward spiral, he’ll be a force to be reckoned with as the Tour hits the Alps.

About Stephen Gallagher
Dig Deep Coaching is a global coaching company that works with athletes of all levels across the following disciplines: road, track, cyclocross, MTB and triathlon. Whether you are taking part in your first ever gran fondo or aiming to compete in the professional peloton, Dig Deep Coaching can help you out. Get in touch via email or follow Dig Deep Coaching at Facebook Twitter and Instagram Sign up to our Mailing list and get 3 FREE crucial Sportive workouts and much more Training and Racing information. Register HERE
Visit Stephen Gallagher's Coach Profile
#ATHLETES-CHOICE#CYCLING#TOUR-DE-FRANCE