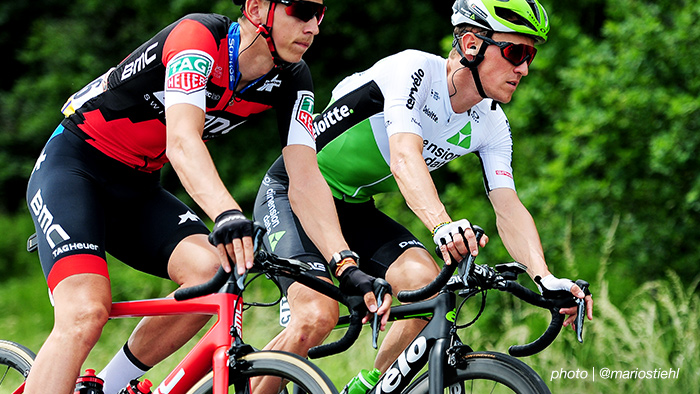 Dr Jon Baker is a coach with Dimension Data for Qhebeka who specializes in training climbers. Dr Carol Austin is head of performance support and medical. The interview below has been edited lightly for length.

Lydia Tanner: What particular training do climbers do?
Dr Jon Baker: Really, a climber’s gotta get through the Tour de France. There are sprint stages and there are mountain stages, but good all-around conditioning is the first thing—if they get dropped on the first sprinting stage and it’s game over, that’s no good. So they’ve gotta be solid bike riders all around. That’s the endurance material we’ve been talking about.

And then if you’re looking for performance in the mountains, there will be more time doing climbs.

LT: So basically… climbers gotta climb?
JB: Yeah exactly, haha. But you’re also looking at how you’re going to maximize the individual rider’s performance, and also against all the teams and their tactics. So for example, Sky will always ride at a steady pace as fast as they can and try to drop people, whereas Astana are always attacking. So climbers don’t all need to have the same type of climbing; there are various aspects of it. So it could be 20 to 40 minute power, and a good power-to-weight ratio, or it could be two accelerations, not dissimilar to sprinters at times; and repeated efforts. There’s quite a lot to it.

LT: What would you say Dimension Data’s style is?
JB: Up until now it’s been very much getting breakaways, getting a head start, and seeing what you can do basically towards the end. Serge Pauwels, for example, is generally in most of the mountain breakaways. Some of the time they’ll make it to the finish and he’ll get to contest—like when he got second on Ventoux.

Whereas a Steve Cummings is much more strategic. He’s gonna pick one or two days that will suit him. He can make it into a breakaway, and although he’s not a necessarily “climber” he’s a very very good climber, and will do something on those kinds of days.

Then maybe some of new guys riders can make it through, like Louis Meintjes or Ben O’Connor— they’re all kinda GC-type riders. They’ll have to stay in the bunch, follow the Froome train, and deal with attacks from other teams. So there are different ways of playing it given the strengths of the riders.

LT: What training metrics do you use most for climbing?
JB: It’s a watts per kilo kinda game really. You know the lightest guys with the most power are generally there or thereabouts. But again it comes down to the types of riders. For Stage 4, the mur de Bretagne, there’s what you’d say is kind of a climb to the finish. It’s a very short, just a kilometer, kilometer and a half climb, so FRC is pretty important on that kind of finish. Whereas an mFTP divided by weight (watts per kg) is important on the long climbs like Alpe d’Huez. So it depends on the type of rider and the type of finish you have as well.

…Of course peak power matters when you’re fighting for the bonus seconds, but it’s less so.

LT: So are those guys in the front of the line for massage and snacks?
JB: I guess it’s sort of a semi-polite rotation on those things. The guys who have been in the break all day may get a little extra attention.

LT: How do these smaller guys deal with long windy stages/cobbles?
JB: I’d say that on longer windy days, their best bet is going to be kind of hiding away in the peleton as much as possible from the wind. As far as cobbles, I guess it depends on who we select. Serge Pauwels is Belgian, so he’s ridden cobbles since he was little, so that’s not a big problem. We don’t have many guys on our team who haven’t seen cobbles before, so I think the odds we have actually are not so bad for that.

LT: Do you think that’s a valid concern for riders in general?
JB: I think it needs to be. I mean it’s such a hard stage, and there’s so much risk. One crash on a guy who’s only 55 kilos, and no meat on him, and you’re looking at breaking things. For all those guys, but particularly for the smaller guys. I think there will also be a lot more fighting into the cobbles, and positioning will be really important. It’s going to be a battle of a day, fun to watch on TV for sure. I also don’t know how Froome is on the cobbles, we’re gonna find out—it could be a way to ease up a bit on the mountain and time trial game. (See our summary of stage 9 to see how this day played out)

LT: When you’re trying to walk that really tight margin between strength to weight ratio, what metrics do you watch to make sure these guys don’t go too far over the line?
JB:We watch the power numbers and changes in body mass. It’s always a seesaw, and watching the balance. It’s an inverted U sort of relationship: When you’ve got low power and high weight that’s not so good, but then as your weight goes down and your power goes up, you’ll get faster. But there’s a certain point when your weight goes down too much and your power also suffers and you maybe end up slower again.

Dr Carol Austin: I think what’s important is the more files we have, the more experience we have with the rider. So if we’ve got, say, data for them for the last three or four years, we get a better idea (providing they’ve got weight data, body compositions, and all their power data). You get a very clear idea of what their optimal weight is and work towards that.

We also monitor them closely over the lead in and during the race. Every morning they do essentially a pre-breakfast body weight, and pre- and post-stage weight, and that’s really to look at hydration and see how much fluid they’re losing during the day. We also look at urine specific gravity which also gives us an idea of their hydration status, and we do intermittent body compositions… we are monitoring really closely during the tour.

LT: What do you do if one of those metrics starts go to haywire?
JB: It’s important to be calm when you use data in those situations. We collect lots of information, so making sure what we’re seeing is real is the first thing, and then it’s important to see how things relate together. So it’s slowing down, being calm about it, and making informed decisions. Because sometimes a data point can be wrong—you know a heart rate monitor could be miscalibrated, or maybe they’ve got something in their pocket when they’re on the scale. It can be something so simple that can give the wrong conclusion.

CA: I think on an acute basis, when something goes wrong it’s usually hydration. A lot of it, like with TrainingPeaks, is actually direct feedback for the rider. So if they get on the scale and see they’ve lost like three or four kilograms, they get that immediate feedback and start drinking.

And then if we see bodyweight dropping over the time and we’re concerned that there’s a problem, we have a chef traveling with the team, so we can look into optimizing their meals and their sports nutrition on the bike. We’ve got a good selection of stuff for racing as well as after racing. Lots of food around in various forms.

LT: What’s their favorite thing to eat? (Please say Nutella)
CA: We actually always ask them what’s their ultimate treat, and for a lot of them it’s chocolate, really good chocolate. Yeah, that’s their reward if they do something special.

LT: Like win a stage and you can eat a chocolate bar?
CA: Yeah, or like a piece!

LT: What’s a workout an amateur rider could do at home to try and experience a little of the tour?
JB: If it’s an amateur at home, they’ve got to build their fitness… they can’t just jump in and train like a pro. With Serge, he comes to Italy and he’ll do the same ride, which is like four or five mountain passes, trying to simulate what he would be doing in a race.

LT: So again, if you want to be a climber, go climb mountains?
JB: Yeah, and then do it four or five days in a row!

About Lydia Tanner
Lydia Tanner is the athlete content editor at TrainingPeaks. She was formerly an editor at Bicycling Magazine and contributor to Bike Magazine, Mountain Flyer, and RedBull. She is a two-time collegiate national champion in XC MTB, and raced the World Championships as a U23. She is perpetually curious about physiology and human performance.
#CYCLING