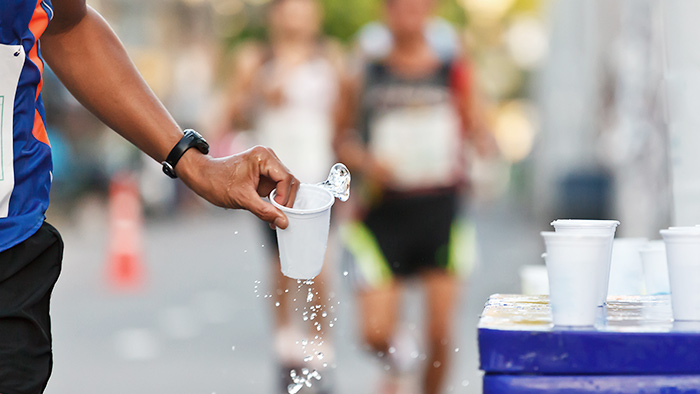 How to Avoid These 3 Common Long-Distance Racing Hydration Fails

Learn how to avoid dehydration, hyponatremia and GI distress by calculating your fluid intake properly during longer and/or hotter races.

When it comes to longer distance racing, the potential for a significant hydration fail is high.

So, it’s well worth thinking strategically about what fluid and electrolytes you’re taking in, in order to minimize the chances of the wheels coming off.

Hydration fails in longer races tend to take one of three common forms:

Dehydration is not quite as common as most people think. It occurs if you fail to replace an adequate amount of water in relation to what you’re losing in your sweat. But, the degree to which you have to be dehydrated for performance to suffer is debatable, with no bullet proof consensus, mainly because it’s a very individual thing.

Although there’s clearly a potential risk of dehydration in longer—and especially hotter—races and particularly if you have a very high sweat rate, only a few athletes actually tend to suffer from a really high degree of uncorrected fluid loss because access to drinks is usually very good on the modern race course.

Though it varies from course to course, in IRONMAN 70.3 and IRONMAN distance events, drinks tend to be available every 10 miles or so on the bike and every one or two miles on the run.

Combine that with the fact that carrying one, two or even three bottles on the bike is pretty easy and it’s clear why most athletes don’t ever get near the point where they completely run out of fluid and become excessively dehydrated.

This is primarily because thirst (the main symptom of impending dehydration) is a very powerful motivator to drink, so you naturally reach for a bottle or cup when it starts to become very noticeable.

Essentially, when it comes to avoiding severe dehydration (though not necessarily maximizing overall performance), just drinking to avoid excessive thirst is likely to be adequate to prevent this from happening in most cases.

One exception to this rule can be when athletes with extremely high sweat rates and/or very salty sweat are doing races in hot/humid conditions. Here sweat rates can massively outstrip the ability to take in and absorb fluid through the gut.

Another exception are novice athletes who may not be as good at listening to their bodies and spotting the early signs of thirst when engaging in a strenuous activity, so that they become a bit too dehydrated before they realize they need to do something about it.

These athletes tend to benefit from a more proactive approach to hydrating early in the bike leg of long races in order to manage the loss of fluids and electrolytes that occurs over the full duration of a race.

This might involve drinking to a plan early on in the race and even drinking somewhat ahead of thirst (and consuming significant amounts of sodium if you sweat a lot). This tactic ideally needs to be based on some thorough testing in training to avoid going too far the other way and falling foul of over-hydration though.

More is definitely not always better when it comes to drinking in races.

Overhydration has been studied very extensively in the last 10 to 15 years because a number of athletes have died from it (or more accurately from hyponatremia which is the end result of drastically over consuming fluids low in sodium before or during a sweaty activity).

One study conducted at IRONMAN Frankfurt found that around 10 percent of finishers exhibited blood sodium levels classifying them as hyponatremic—a condition that is likely driven largely by the diluting effect of over-consuming water and other drinks low in sodium and possibly made worse in some cases by high sweat sodium losses.

Whilst no athletes died from the condition during the study, and only a few needed to be admitted to hospital, the fact that a significant proportion of the field were suffering these performance-harming symptoms tends to suggest that over-drinking is quite a widespread issue at longer triathlon events.

Unsurprisingly, avoiding overhydration basically involves not drinking too much!

However doing this may not be quite as simple as it sounds when you’re also trying to maximize your performance. That’s because preserving your hydration status does help to reduce cardiovascular strain when you’re pushing yourself hard over multiple hours. There’s a balance that needs to be struck.

As with avoiding dehydration, drinking water solely to the dictates of thirst has been widely touted as the best way to avoid hyponatremia. The theory being that because thirst ought to be an accurate reflection of the body’s need for water, responding to it should keep everything in balance.

But, as is the case for avoiding dehydration, practical experience shows that for a lot of athletes doing this may not be effective in longer distance races if they have very high sweat rates and/or they’re losing a lot of sodium in their sweat. Large sodium losses can blunt your thirst mechanism and result in fluid intake that fails to maintain blood volume and can compromise performance.

An interesting recent study of half IRONMAN athletes during a race in Spain demonstrated that those who took in salt capsules and then drank to thirst actually drank more water during the race. They maintained their blood volume better and performed around 26 minutes faster on average than a control group of athletes who took a placebo supplement that contained no salt.

This, along with a huge amount of anecdotal evidence from athletes who supplement with sodium during long races with positive results, strongly suggest that a degree of sodium supplementation is a very important part of the picture when sweat losses are high over longer races.

At Precision Hydration we’ve developed a free online Sweat Test to help athletes determine whether their sodium losses are likely to be low, moderate, high or very high and to give some advice on where to start experimenting with personalizing their sodium and fluid intake during a race.

Another point worth mentioning here is that quite a lot of athletes have a tendency to increase their fluid intake in the days before a race in order to try to prevent dehydration. Whilst a small increase in intake can be a good idea, excessive drinking can set you up to fail by diluting the body’s electrolyte levels before you even start sweating, making performance-damaging hyponatremia more likely on the day. For more advice on how to start hydrated, read this.

Another hydration fail that happens a lot in longer distance triathlon racing is ending up feeling bloated and nauseous or even being sick.

Gastrointestinal (GI) issues are more of a risk during races (especially when it’s hot or you’re working very hard) partly because blood flow to your gut is compromised at the exact same time you’re likely to be throwing a lot of food and fluid at it to stay fueled and hydrated.

The gut’s ability to process and absorb calories and liquids is hampered by the low blood flow to it and everything can “back up,” making you feel horribly bloated and sick.

GI issues also often occur when athletes get the ratio of fluids to carbohydrates in drinks wrong. This can be a big problem for anyone using more traditional sports drinks that fall into the isotonic or hypertonic categories (meaning they are of similar or slightly higher concentration to your blood stream respectively). Think Gatorade, Lucozade Sport or other similar powdered energy drinks that mix up to a 6 to 7-percent carbohydrate solution.

Isotonic or hypertonic drinks are very good at delivering large amounts of energy into your system very quickly. This makes them suitable for situations when energy requirements are higher relative to fluid requirements (short, fast events in cool conditions for example) but it also means that they can start to bung up your stomach during longer and hotter events where your fluid and electrolyte needs are much higher in relative terms.

For this reason I’d strongly recommended sticking with hypotonic drinks (i.e. those that are of a significantly lower concentration than your blood). Leave your fluids for hydration and get the lion’s share of your energy from solid or semi-solid foods instead. Most people’s guts tend to respond better to this than to combining all of your fluid, electrolyte and fuel needs into a single milkshake-like solution.

About Andy Blow
Andy Blow has a few top 10 Ironman and 70.3 finishes and an Xterra World Age Group title to his name. He founded Precision Hydration to help athletes solve their hydration issues. He has a degree in Sport and Exercise Science and was once the Team Sports Scientist for Benetton and Renault F1 teams.
#HYDRATION#IRONMAN