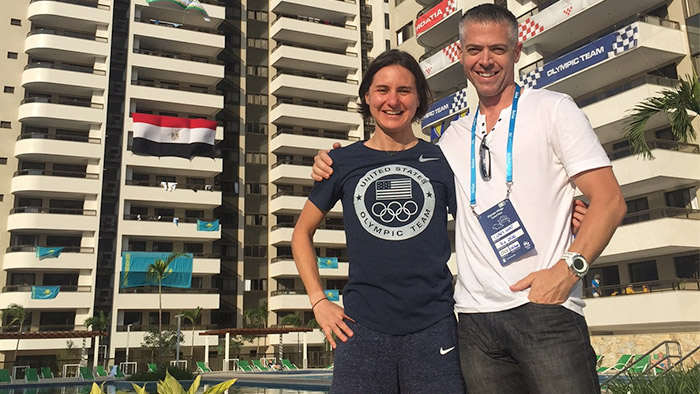 Case Study on Megan Guarnier: The Making of a World Tour Champion

Megan Guarnier’s athletic journey to becoming a World Tour champion was the result of several years of careful planning and adaptation rather than a meteoric performance rise.

In 2016, Megan Guarnier won the inaugural UCI Women’s World Tour (formerly known as the World Cup) and ended the season as the number one ranked female professional cyclist in the overall UCI rankings.

Guarnier became the first American cyclist, male or female, to attain these titles. The last American ranked number one in the UCI rankings was Greg LeMond when he won the overall title for what was formerly known as the Super Prestige Pernod International in 1983.

In contrast to the vast majority of Americans, Guarnier did not come onto the professional cycling scene as a specialist of the individual time trial or a pure climber.  Instead, Guarnier had a solid foundation as a well-trained athlete, unmatched perseverance to learn from failures and improve perceived weaknesses, and perhaps most importantly, dedication to becoming the best well-rounded professional cyclist in the world.

I had the privilege of first meeting Megan Guarnier in 2007 during a USA Cycling talent identification camp at the Olympic Training Center in Colorado Springs.  I was a sports science consultant for USA Cycling at the time and was responsible for developing lab and field testing protocols that could compare normative data compiled in-house with international standards.

Admittedly, Guarnier did not have the highest power outputs of the athletes at the camp.  However, we did discover that she did not fatigue between three repeated short course tests (roughly four minutes of maximal effort and equal recovery), with no decrease in power between trial one and two, and only a 3 percent decline in trial three in comparison to the typical 5 to 10 percent decline observed in other athletes.

These results indicated that Guarnier had a greater capacity to 1) recover between maximal efforts and 2) perform more work near VO2max within a single training session. Despite these seemingly isolated revelations in Colorado Springs, Guarnier was fully aware that simply training hard and improving field and lab test values would not automatically yield podium finishes and race victories.

Instead, Guarnier instinctively knew that being the best in the world necessitated a progression of a multitude of factors that would collectively, over time, develop her into a World Tour champion. It is impossible to cover all of the factors that led to Guarnier’s success within the brief context of this article, therefore, the remainder will focus on progression of training load and the power profile and how these trends are reflected in improved performance over time.

Athletes will positively adapt to progressively increasing training loads which are dependent upon prior stress-induced adaptations in their training history and innate physiological capacities.

The average weekly TSS trend per season for Guarnier is displayed in Figure 1.  The largest increase in training load (53%) occurred between the 2008 and 2009 seasons, when Guarnier transitioned from the U.S.-based amateur ProMan squad to the French-based ASPTT Dijon Bourgogne team, where she gained vital tactical experience in higher level UCI competitions in Europe.

Between 2009 and 2010, Guarnier’s training load increased by 25 percent when she signed her first professional contract with U.S.-based TIBCO squad. The subsequent seasonal increases in training load were less than 15 percent and accompanied by near linear increases in peak power output indices.

Figure 2 reflects the seasonal changes in mean maximal power relative to body mass associated with one minute (MMP1), five minutes (MMP5), and functional threshold power (FTP), expressed as a percentage of the highest peak power, which occurred during the 2016 season across all indices.

To suggest that these trends were purely by design and exceptional forethought would be misleading, as it’s not entirely known whether the high training loads accomplished by professional athletes are a result of nature or nurture, or more likely, a mixture of both.

There are only a few long-term studies monitoring training and performance of world-class cyclists.  Interestingly, Pinot & Grappe (2014) documented similar trends in training load and the power profile following a six-year monitoring study of Thibault Pinot during his years of transition from an elite amateur to a top-10 Grand Tour finisher.

In the case of Pinot, the largest increases (~62 percent) in training load occurred within the first two years recorded after which the annual training load continued to increase at a decreasing rate once he entered the professional ranks. In contrast, the record power profile (primarily aerobic indices) continued to increase, most notably for durations greater than one hour.

The progressive rise in the World Tour (World Cup) and end of season UCI overall rankings for Guarnier is displayed in Figure 3, while the compiled history of Guarnier’s race results can be found here.

Guarnier’s results were insufficient between 2008 and 2010 to accumulate UCI points, but her first major professional victory as the overall winner of the Premondiale Giro Toscana Int. Femminile (UCI 2.1) in 2011 elevated her status in the UCI rankings, which continued to increase, on average, in the years that followed.

As previously mentioned, there are very few published studies on the evolution of a cyclist to the professional level.  While somewhat intuitive, historical trends of both Pinot and Guarnier suggest that a critical threshold of training load is reached once an athlete enters the professional ranks, after which the quality, not quantity, of training load determines the rate of improvement for the power profile and subsequent race performance.

There are some apparent similarities among cyclists as they transition from development riders to the professional ranks, specifically a decreased contribution of training load to increases in the power profile.

The significance of this inverse relationship has not been fully elucidated. These topics, in addition to other factors contributing to athlete development will be discussed in great detail during my presentation at the upcoming Endurance Coaching Summit.

About Corey Hart
Dr. Corey Hart is well-known in the competitive cycling world as one of the top coaches for professional and development athletes. His athletes, past and present, include Olympians and top professionals, such as Megan Guarnier, Carmen Small, Flavia Oliveira, Alexis Ryan, Tayler Wiles, Geoffrey Curran, Sarah True, Meredith Miller, Caleb Fairly, Tina Pic, and Kimberly Baldwin. Dr. Hart is currently a research fellow at Mayo Clinic in the Division of Endocrinology, Diabetes, and Nutrition where he is actively engaged in research focusing on skeletal muscle metabolism in the context of aging and metabolic disease.
#CYCLING