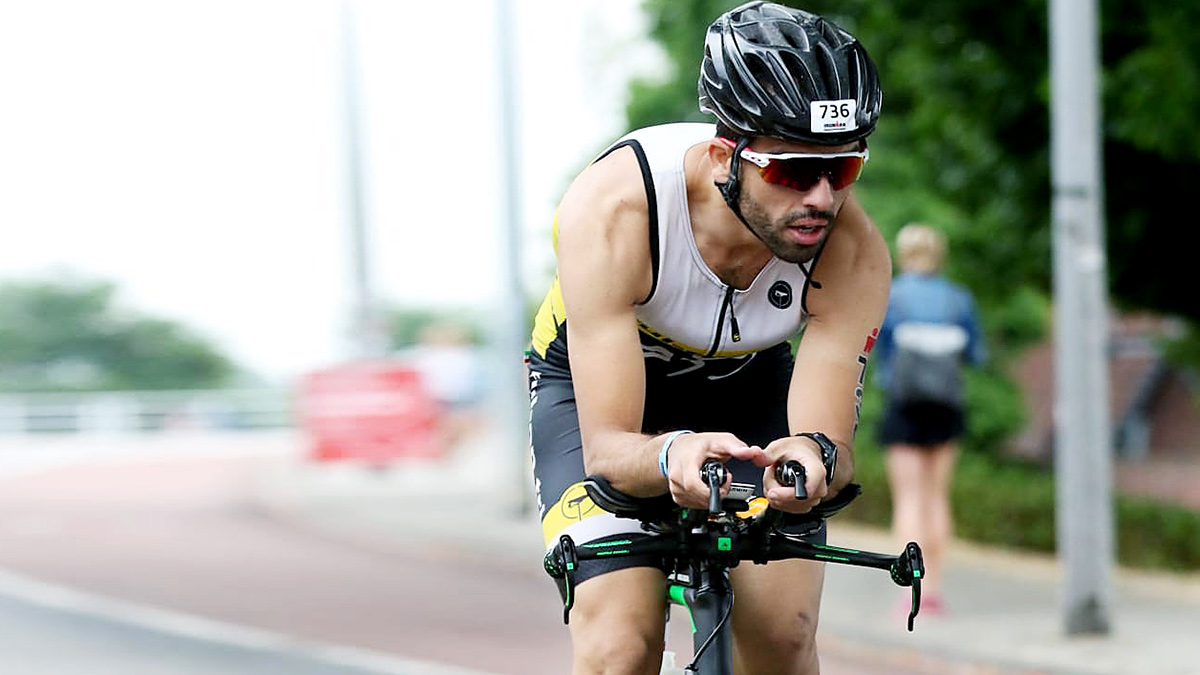 How This Triathlete Shaved a Full Hour Off His IRONMAN Time

With some focused preparation and a new nutrition plan, this age-grouper beat his first IRONMAN time by a whole hour. And it only took him a year to do it.

In our never-ending pursuit of sports inspiration, we usually look to professional athletes, faster club-mates (and nowadays, even strangers on Instagram), as good examples to follow. As a coach, I also follow other coaches—including from other sports. This year however, my most inspirational role model was one of my own athletes.

Mateus Pimenta (36) is a Brazilian IT professional who lives and works in London. He started racing triathlons in 2016, but I met him in 2017 at our triathlon club training camp in Mallorca. Soon after, I started to coach him for his first IRONMAN.

It was early May and his main goal was IRONMAN Vichy in late August. He had a good platform of endurance to build on, but lots more needed to be done and there was not much time. He ultimately finished the race in 12 hours and 41 minutes (Swim: 1:55; Bike: 5:41; Run: 4:50), a result we were both very happy with.

This year Mateus’s A-Race was IRONMAN Maastricht (early August) and we started training in the fall. Result? He smashed almost all of his previous splits: 1:33 for the swim (both races were non-wetsuit); 5:40 for the bike; and 4:18 on the marathon. Final time: 11 hours 42 minutes, almost exactly one hour faster in just one year!

Mateus is a true endurance soldier. He executed around 90-95% of the training sessions I planned for him; his consistency day-in, day-out (while balancing a very busy professional and personal life) was truly inspiring. But how exactly did he manage to shave one hour off his previous IRONMAN time in only one year? Here’s a round-up of what I believe were the most important factors. 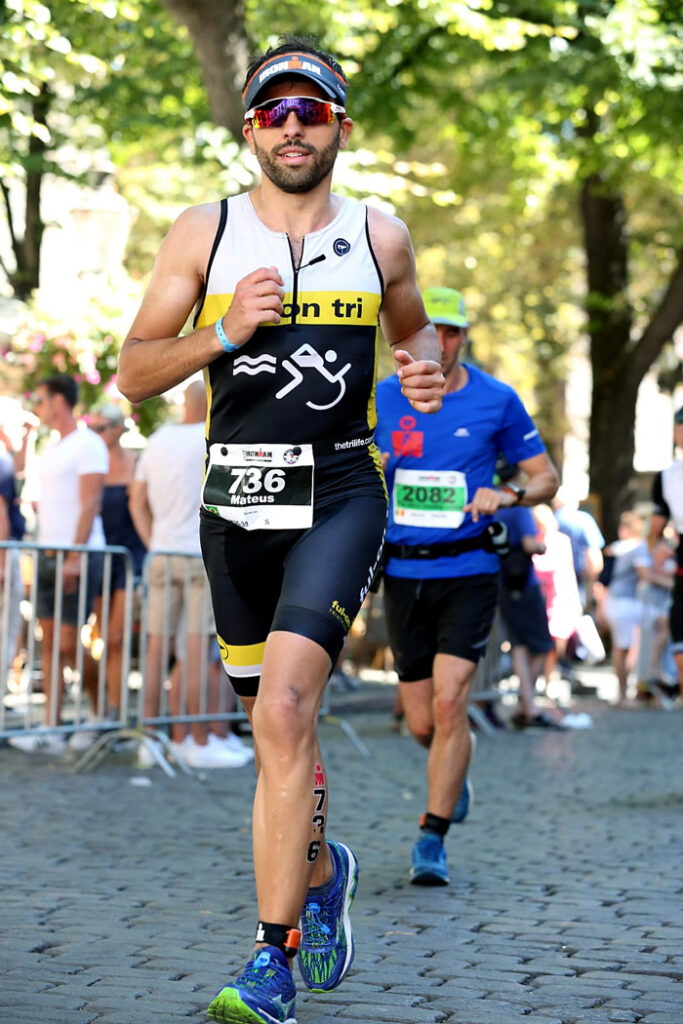 There are many shortcuts and fast-track programs to an IRONMAN finish line. But I believe that the more time you have, the better. It’s like producing a good wine, or baking a cake, for those of us with a sweet tooth: first you bake, and then you put the icing on top.

The extra time you put into your IRONMAN preparation will give you and your coach plenty of time to work on the foundations (technique, strength and conditioning, endurance build-up). Then you will be able to build a race-specific pace and a precise strategy as race day approaches.

“I felt less rushed to get the training in at the end than last year,” says Mateus. “This also helped with building confidence and allowed a lot more focus on the race and the nutrition on the last months.”

Mateus worked on his foundations in October, November and December. But he then got injured (a very nasty bike accident, right in front of me) and the program had to change to accommodate rehab, and eventually new training blocks. This is another reason why it is always preferable to start earlier: you’ll have time to modify when life forces a change of course.

During the first part of the season we worked a lot in the gym. As Patxi Vila, coach of a UCI 3x World Champion, told me once, “It’s important to hit the gym hard during the winter months, otherwise cyclists [and of course triathletes] won’t be able to push the watts they need to perform on the bike.”

We first targeted muscular endurance, the physical foundation Mateus needed to support the physiological demands of long-distance triathlon. We then moved into strength (the stronger the better, right?), power (strength over time) and sustainable power (power over time). Of course, flexibility, stretching, stabilization and core reinforcement were also part of the big picture.

“The most immediate result,” says Mateus, “was almost no injuries during 9 months. And probably most of my swimming improvement was based on the upper body strengthening.”

Swim with a group, but not always

One of Mateus’ main goals for his second season as a triathlete was to improve his swim, targeting the specific needs of an open water race. He worked a lot on technique, but we also tried to maintain the fitness component as the main part of his program.

For this purpose I always made sure he was hitting the pool with the local tri club. Not only because swimming with other people pushes you that extra bit, but also because it’s the closest way you can rehearse a race scenario (where you swim together with hundreds of other people).

Not all the sessions were performed with the club, as Mateus also pointed out: “Swimming with other people helped for drafting and pacing. You can usually push harder if you are leading, but it depends on who you are swimming with. Many times, we didn’t complete the session because of faffing. Lane speeds are also very relative and varied from session to session.”

We worked both on long-endurance sessions, as well as short and fast ones (as you don’t want to get too comfortable). We also threw in some more specific workouts performed at anaerobic threshold, and several open water sessions during the spring. The result (shaving off 25 minutes), was a huge achievement.

It is crucial build up towards the IRONMAN with several B and C races. Not only because you need to get familiar with race scenarios every season (and the demands of preparing your gear,  developing transition skills etc.), but also because there are not many workouts as good as actually racing a B or C race. Even though these may not be your main goal for the season, the racing component allows you to push a bit more than in training. These are also good opportunities to test your tactics, nutrition and hydration.

“Racing more, and gradually increasing the distances was a good strategy,” says Mateus. “The races were reasonably spread out and allowed for recovery and good preparation. Every race you learn something new, either about yourself or a new condition that makes you adapt. In terms of nutrition, repeating it over and over again made it second nature.”

However, and especially if you’re already traveling a lot for work or for your main race, I always suggest staying local, if you can, for B and C races. This will take some stress out of your schedule, and will allow friends and family to come and support you! Plus you’ll discover more of your local area and support the local clubs.

Three months before the race, Mateus decided to work with my nutrition partner. His main goals were to lose weight in a healthy way (he ended up losing 8 kg in 3 months) and to plan a periodization of his nutrition that matched his training sessions. This included a “diluted” weight loss towards the race and a nutrient-specific calorie intake to reflect the specific training I was giving him. As the race was also expected to be super hot, a lot of time went into his hydration strategy as well.

Get all your training data in one place

The fact that all his workouts (and feedback) were on TrainingPeaks made it easier to review Mateus’s progress every week. This model of accountability was also easy to integrate with his nutrition plan. “I really like the combination [of TP] with My Fitness Pal,” said Mateus, “and having the nutrition plan delivered according to the training each day played a big role—not just on race day, but also in the training sessions.” (Get started on TrainingPeaks for free!)

Every athlete is different, but Mateus’s progress was a great example of the results you can see from deliberate practice. We’re looking forward to seeing what Mateus can do next season as he gains even more experience!

About Nick Busca
Nicola (Nick) Busca is an Italian triathlon coach based in London. He is a Level 3 High-Performance triathlon coach with British Triathlon and also a Training Peaks Level 2 and an IRONMAN-certified coach. Before setting up his own club in 2018, Core - Ski and Triathlon Academy, he led swimming, cycling and running sessions with the London-based triathlon club Ful-on Tri and coached the swimming squads of Swim For Tri (also based in London). After more than 20 years racing and coaching alpine skiing, he needed a new challenge and started to train and compete in triathlons in 2012. He began with the Turin-based triathlon team Aquatica and received private coaching from former Olympian athlete Vladimir Polikarpenko, who raced in three Olympic games for Ukraine. In 2016 and 2017, he qualified for Team GB for both the ETU European Championships (middle distance) and the ITU World Championships (long-distance). He still races and tries to improve season after season.
#IRONMAN#TRIATHLON