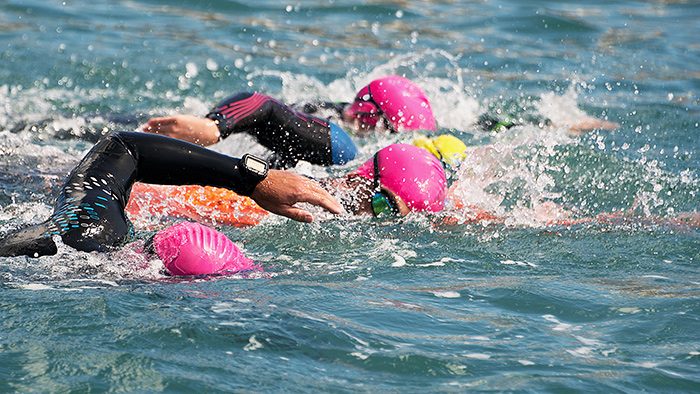 Do These Workouts To Surge-Proof Your Swim Start

Even the most meticulous pacing plan can go out the window when you’re nervous or excited at the start of a swim. Fortunately, it’s possible to work with these nerves, rather than against them, with these workouts designed to help you take advantage of the the surge at the start of a race.

Imagine for a moment that you’re at an in-water swim start at your local triathlon. Your goggles are set, you’re warmed up, seeded correctly (you think), and you’re nervous as all get out. Then, almost out of nowhere, the air horn blasts from the race director and it’s go time!

Starts are always chaotic and exciting, with some racers gunning it from the start and others taking a more measured approach. Which one are you? Which one do you want to be?

We’re talking about one of the absolute key issues in this sport: Pace. I guarantee every single person reading this has learned about pace the hard way, more than once. (Hopefully just not recently!) But even the hardest-learned lessons can go out the window when you’re nervous or excited, or when the wind’s in your hair and you’ve got a closed road to yourself. Fortunately, it’s possible to work with these nerves, rather than against them.

Like most things triathlon-related, the solution comes from three things. Preparation, practice in training, and trial and error. If you know you tend to get overexcited at the start, you should train for a slightly higher race pace at the gun. That means making several pretend race starts, say once a week, at a variety of efforts. That way you can figure out how long you can push yourself before slowing back to race pace and looking for another pair of feet upon which to draft. (You do draft, right?)

Another way to get your body used to a surge is to recreate it, repeatedly, at different points in your workout. This one’s called “Pig in a Python.”

In other words, the 25y surge (or the “Pig”) is moving progressively later into the effort with each repetition. (Pick a fairly short rest interval in between 125s, like 5 or 10 seconds.)

Try that as your main set one day a week for a few weeks. Once it’s old hat, try making one small change.

Come summer, when the gun goes off, you’ll have trained your body to push a little at the beginning of the swim, and anywhere in between. That means that no matter how nervous or excited you get, you won’t get to 300 yard mark wondering why there’s this truck on your back and you can’t catch your breath!

About John Post, MD
Dr. Post has a long history with triathlon including 6 Kona finishes and an Orthopedic Surgery practice in Virginia caring for, among others, injured triathletes. He now enjoys giving back to the sport by being a World Championship Transitions volunteer every October. If you find yourself on the pier in Kona, please stop and say hi to “the man in the red hat.”