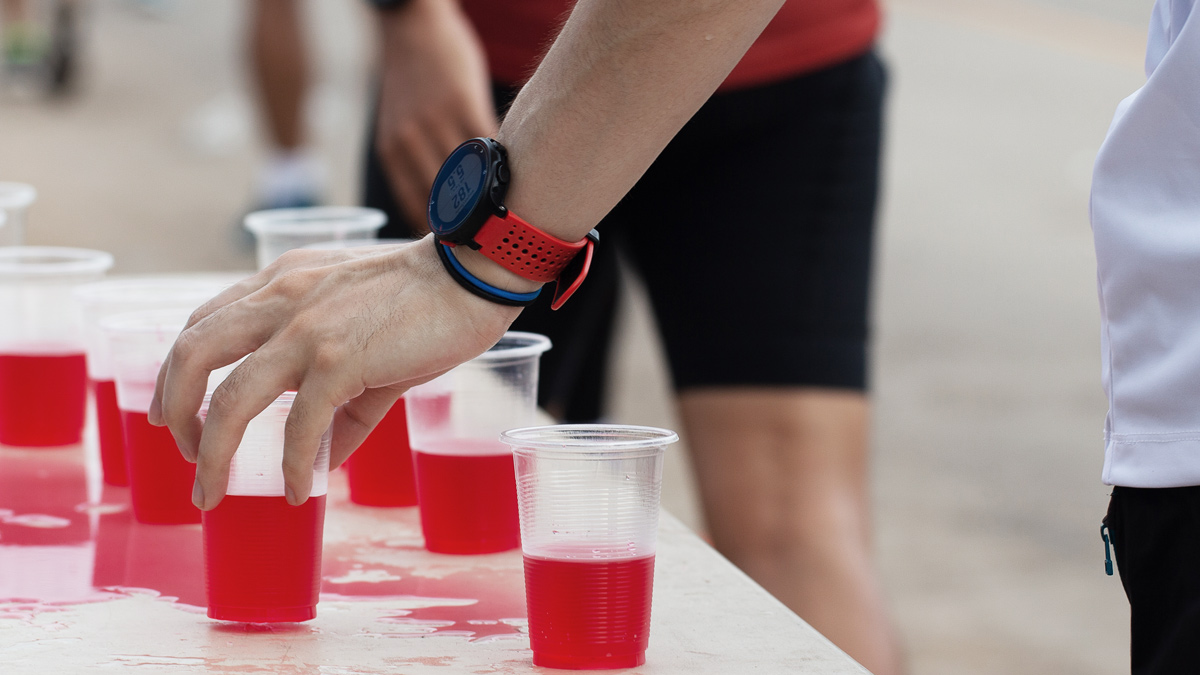 Which type of sports drink is right for you?﻿

Is your sports drink isotonic, hypertonic, or hypotonic? Understanding when different concentrations work best will take your hydration to the next level.

You may have heard the term “isotonic” in relation to sports drinks, but do you know what it actually means? The tonicity of your sports drink can profoundly affect how your body absorbs it—and depending on your goals, sweat rate, and event, this can make a big difference in the success of your hydration strategy!

What is ‘tonicity’ and why does it matter?

Tonicity is a metric used to compare the thickness of one solution to another. In the case of sports drinks, we’re comparing the tonicity of a given drink to the concentration of human blood (~285 to 295mOsm/kg).

Why human blood? Whether a drink is hypotonic (lower concentration than blood), isotonic (about the same concentration) or hypertonic (higher concentration) affects how quickly you can absorb it into your bloodstream. This determines how much energy (i.e. carbohydrate) it can deliver, and how well it can replace the fluid you’re losing in your sweat.

As with most things in life, this all boils down to a couple of key trade-offs.

Isotonic Drinks and When to Use Them

Most traditional sports drinks (like Gatorade, Powerade and so on) technically fall into the ‘isotonic’ category, that is, they’re similar in concentration to human blood. Isotonic drinks deliver a reasonable amount of energy and clear the gut promptly too—though not quite as fast hypotonic solutions.

Isotonic drinks are usually around 6-8% carbohydrate, or 1.5 to 2x the amount of carbohydrate in hypotonic drinks. Lab studies tend to show that they do a reasonably good job of being absorbed into the bloodstream—they’re slower than hypotonic drinks, but not necessarily by a huge amount. This can be useful for short-duration, high-intensity exercise, where getting carbs in quickly can be more important than warding off dehydration.

The problem with isotonic drinks is that they can cause quite a lot of gastrointestinal upset when consumed in large quantities (as is often the case in long endurance events). This is especially true in hotter conditions (when high sweat rates drive a faster rate of drinking), or when combined with carbohydrate-heavy snacks like gels and energy bars.

It also turns out that many commercially available isotonic drinks are, well, not actually isotonic. A 2008 paper published in a Swiss sports medicine journal found that quite a few ‘isotonic’ drinks were actually coming in at well over 300mOsm/kg when measured in their lab. Some were up as high as 348mOsm/kg! In other words, these drinks were actually quite a lot more concentrated (or hypertonic) than the blood of the people drinking them.

In a way, this is not massively surprising as the rules (in Europe at least) allow drink manufacturers to claim products are ‘isotonic’ if they are between 250 and 350mOsm/kg. Unfortunately that means that many ‘isotonic’ drinks on the market today will actually tend to behave more like hypertonic drink—because they are. Interestingly, many athletes will naturally water these drinks down for taste and performance. Without even considering the tonicity, they’re likely creating a drink that’s more isotonic.

Hypertonic Drinks and When to Use Them

Of course, that doesn’t mean there isn’t a place for Hypertonic drinks in training. Hypertonic drinks are formulated with lots of carbohydrates, and will maximize energy delivery to fuel high-intensity activities. Most recovery drinks also fall into this category, with the addition of protein as another major ingredient.

There’s no problem with drinks being hypertonic per se. In fact, it can be a very good thing when you want to deliver lots of calories quickly and efficiently into the bloodstream (liquid calories tend to be more readily absorbed than solids).

However hypertonic drinks can cause issues when fluid intake is the priority and dehydration is a concern; such as during long-duration activities where you’re sweating a lot. This, ironically, originates from the same mechanism that makes hypotonic drinks so good for fluid delivery; osmosis.

When a hypertonic drink lands in your gut from your stomach, the concentration of fluid in your intestine itself tends to become hypertonic. Your body then has to first move water out of the bloodstream back into the intestine to dilute the solutes down to a level that allows absorption of nutrients and fluids back across the gut wall into your body.

This net movement of water from the blood into the intestine will technically ‘dehydrate’ you; your body is moving water out of the blood into the gut when what you actually want to do is increase your blood volume levels. That’s why drinking hypertonic drinks can make you feel a bit sick and even more thirsty, even if you were aiming for exactly the opposite!

For most activities, it’s best to stick to using hypertonic drinks only for quick calorie delivery; not when hydration is a major priority.

Hypotonic Drinks and When to Use Them

In simple terms, the fluids in hypotonic drinks tend to be absorbed into the bloodstream the fastest, but they deliver the least amount of carbohydrate per unit volume.

Hypotonic drinks are formulated using small amounts of carbohydrate (less than a 6% solution), and should be your preferred option if the primary goal of your drink is hydration rather than delivery of large amounts of energy.

This is a major reason why (my company) Precision Hydration’s drinks are all hypotonic. Their main aim is to help replace the fluids (and electrolytes) lost in your sweat, not to provide large amounts of carbohydrate energy that are better taken from more solid sources of food/fuel as required. It’s also a why mixing them up as directed (one packet or tablet into 500ml/16oz of water) is important if you want them to perform as intended.

Whether your goal is steady energy delivery over a short period; a big burst of calories for recovery; or hydration over an endurance event, the tonicity of your sports drink matters. Take some time to check out the nutrition label on your go-to mix, and do some experimenting to see which concentration tends to work best for your sweat rate and event type. Dialing in this crucial element of your hydration strategy will insure that you’re getting the most out of your hydration!