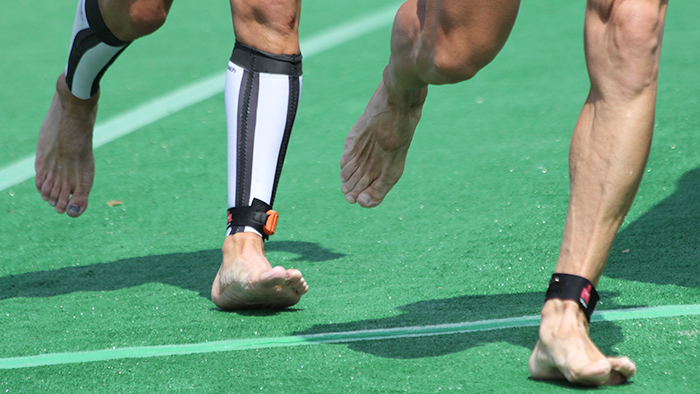 All athletes will inevitably need to make the decision about whether or not to pull the cord on a race. Here are some personal examples of how and why other athletes made the decision to call it a day or push onward toward that finish line.

We’ve all been there. Over our heads. Maybe even afraid. We’ve found ourselves at some portion of a race where we were no longer in control. Or just plain whipped. Likely thinking to yourself, “I don’t need to be doing this.”

But how do you when know when to throw in the towel or to pause; how do you decide whether or not it would be beneficial to build on previous race and workout experiences, regroup and then soldier on?

Not Their Day in the Drink

One of my local sprint triathlons has an ocean swim which is parallel to shore. They throw a buoy into the water, see if it goes up or down the beach, and then swim that same direction so the athletes are going “downstream.” I’ve done this event several times.

Once the swim course is set, athletes then walk the 1,000 yards down the beach to the start and swim back to center and the transition zone. While walking with the entire field one year, my friend Neil and I were talking and noticed three young women in front of us chatting animatedly. As the group of three approached the start line, the women pointed toward the modest waves and a somewhat angry ocean, pow-wowed, and then pointed back at the ocean while shaking their heads.

The race proceeded as scheduled. Those athletes with a little more experience saw the big waves, waited one or two seconds, then swam though a smaller set until they reached much quieter water. The swim was within their abilities, so they decided to seize the day.

A Long Day on the Big Island

Here’s another example of knowing your personal limits (and in this case choosing to soldier on). In his first (and likely last) trip to the Big Island for the Hawaii IRONMAN, athlete #2, a racer we’ll call Tim, was having a heck of a time with all that the Kona course threw at him.

A veteran of a dozen 140.6 mile efforts previously including IRONMAN Lake Placid and IRONMAN St. George (a course so tough they permanently converted it to the 70.3 distance), he’d raced under many conditions, some pretty awful, and a host of different terrains.

It didn’t help, of course, that he was nursing an ailing Achilles and had been under chiropractic care for a sore back.

This athlete is a real student of the sport. From pre-race reading and reconnoitering, he knew precisely where to line up for an excellent swim. He exited the water, and a good T1 followed. It would be the last good thing in his day for the next 14 hours.

He only made mile four on the bike before flatting. Then he flatted at mile five. Now out of tubes—you guessed it—he flatted at mile six. Now, Tim had done his homework. He had made sure he had two tubes and done several test rides and equipment checks pre-race to make sure everything was in working order.

If you are at all a student of IRONMAN history, you’ll recall in 2005 where two-time IRONMAN world champion Normann Stadler flatted, then went berserk as the lead pack rode away from him. A superb biker, after his bike was quickly fixed, and putting his brain back in his head, he was making great progress in reeling in the lead pack until he got a second flat. Poor Normann. He was so beside himself that he heaved his incredibly expensive bike into the lava fields. His day was done.

Tim briefly considered this option but chose a course of patience instead.

He waited 20 minutes for the bike mechanics, who also couldn’t explain the etiology of his situation. They gave him a new tire and tube and set him off on his way.

This was a hard way to start this race. By now, he was basically cooked. He had such a slow bike start that he had headwinds (and crosswinds!) almost all the way out to the turnaround at Hawi.

You read that right. The out-and-back Kona bike course snakes through the rugged Kawaihae region of the Big Island well known for this wind blowing both ways phenomenon, Mumuku the Islanders call it, depending on the time of day you traverse it.

Tim confidence sank even further as he watched the pro field already making their swift ride back into town while he was still struggling to get up to the turnaround point.

He made the bike cut off, although not by much. He was able to run only the first few miles of the marathon, but he had to walk the majority, saving the small reserve of kindling remaining to actually run the final mile to the finish.

Cramping badly, he was taken to the finish line medical tent, weighed, and found to be 17 pounds down. Seventeen! Through all this he still laughed when he told me (I was a medical volunteer in the tent), “Yes I made it to the finish line by midnight. And at midnight I was busy receiving my second bag of IV fluids!”

But if anything, Tim is a glass is half full guy. Despite his multiple misadventures this day, he was still terribly impressed that he, Tim from Missouri, was able to watch one of the most glorious sunsets he’d ever seen as the sun plunged into the Pacific. How dark and peaceful the nighttime race course was, “The Big Island at night, the stars are really something,” he told me. “ And you know, I’m doing watching them while racing in Kona. How cool is that?” Yes, Tim, how cool is that?

When Slowing Down Leads to Triumph

Our last competitor, let’s call her Amy is a swimmer with 20+ years of experience. She wants one more race to cap off the summer.

There’s a race not too far away, one that’s “only a one mile swim.” Beautiful setting, the perfect setup for a great day. An easy day. One more in the books, right?

When the horn for this swimmer’s wave sounded, she didn’t get 50 yards, breathing to her left, before getting a big mouthful of choppy water.

Not panicked, she recovered, took another stroke, and a second breath, also to her left (since that’s just how she swam). Wham! An even bigger mouthful of water! “I thought I was gonna drown!” she remembered. “I thought to myself, I just need to get out of here, NOW. But wait, I’ve been doing this for 25 years. I’ve never dnf’d anything.”

Patiently, she forgot about the race, waited in place for the choking to stop, and started swimming again. Slowly, very slowly. It took at least 300 yards to return to a semi-normal stroke and breathing pattern but she finally relaxed and finished the mile.

Another race in the books, and more importantly from which she learned a terrific lesson that would likely be applied in some future race. Oh, and she also learned that maybe it was time to learn bilateral breathing.

Trust Your Instincts, But Don’t Be Afraid to Adjust Your Expectations

We all have to make the decision at some point or another in a race whether or not the particular situation we’ve found ourself in is one we can recover from. If our safety is in jeopardy, it shouldn’t even have to be said that the best course of action is to take a bow.

Sometimes, we know before a race even begins that the effort isn’t worth it. And that’s okay. But more often than not, if we can take a brief moment to calm down, fix what needs to be fixed or slow down our pace for a bit, we can find the strength to venture onward.

Often, the decision to keep moving forward will also mean making a huge change in our race-day expectations or race plan. Once you can accept this and adapt, the lessons learned from the experience can make all the difference, not only in your training, but also when you are fortunate enough to have a solid race in the future. Remember, bad races are often the lead-ins to great races, so don’t count them out too quickly.