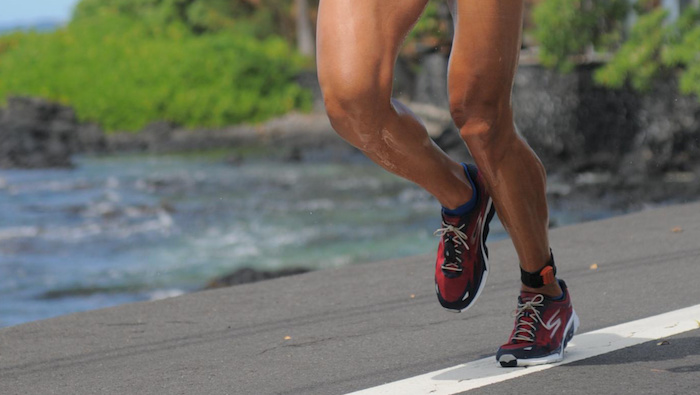 Coach Jim Vance analyzes two running power files from the IRONMAN World Championships and explains how running power meters can help you define the specific intensity for your Ironman run training and racing.

One of the most common questions among Ironman triathletes, and generally the hardest to answer, is “How fast can I run off the bike for the marathon?” If you’ve ever done an Ironman, you know the marathon pace is much slower than if you were running an open marathon. So, how do you determine race pace off the bike?

The truth is, you can’t, because it is greatly determined by the bike intensity and duration as well as your nutrition, pacing, and the course conditions. All we’ve been able to do as coaches and athletes is train some type of aerobic intensity, and hope that it translates on race day. The problem has been we’ve had to use pace to identify intensity, and those don’t match since the pace is slower in the Ironman run, but still a hard effort. Now, with the ability to use run power, you can specifically train for the intensity of the Ironman run, no matter what the pace is.

Two professional men at Kona, Matt Russell who placed 12th, and Lionel Sanders who placed 29th, wore the new Stryd power meter during the race. Stryd is a footpod which measures the work rate in watts of of an athlete while running. For a refresher on how run power meters work, you can read more here.

There are some things which can be learned from these athletes and their power files from the Ironman run. Matt Russell paced himself quite well in route to a 2:54 marathon. The first half of his race was at an average power of 321 watts, with the second half at 300 watts. His Variability Index was only 1.01, so well-paced overall. (Note: since we don’t know Matt’s or Lionel’s functional threshold power for running, metrics like TSS and IF are not accurate in these files.) 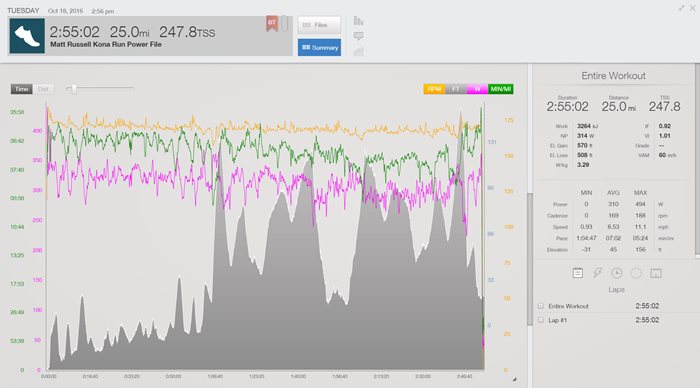 Matt’s highest 1-hour power doesn’t even begin until about mile 2 of the run, through the top of Palani. That’s good pacing early on. You can see on the downhills, his power drops dramatically, taking advantage of gravity. His uphill efforts are not major surges in wattages, meaning he looks to get up the hills with minimal energy use. 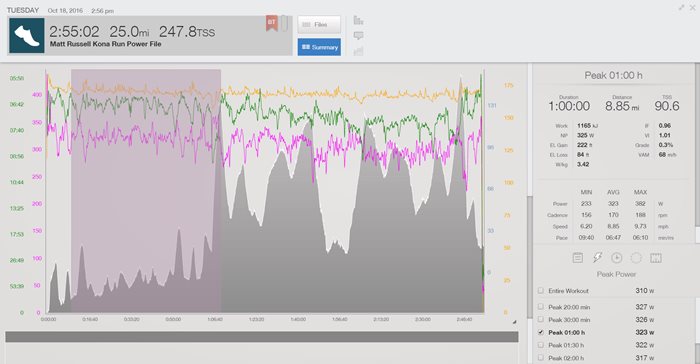 Lionel Sanders didn’t have the run he is capable of, and his first hour was his highest power output. You can see that after the climb up Palani, he really began to struggle. The first hour was 319 watts, but the overall average for the whole run was 270 watts. That’s a 49 watt drop-off, or about 15%. For comparison, Matt’s drop off was less than 4%. The Variability Index of Lionel’s run overall was 1.04, compared to Matt’s 1.01. 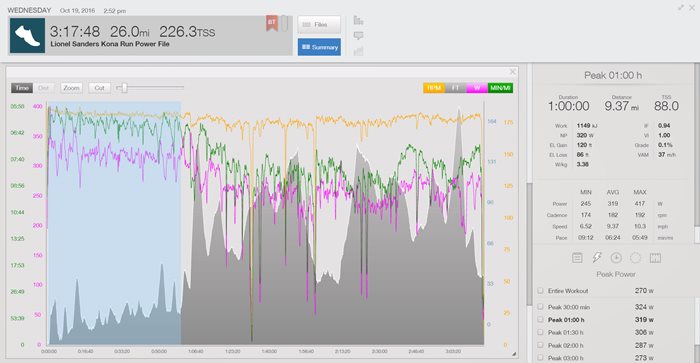 Making Use of Run Power Data for Training

So, how can athletes use this run power data? One clear way is it allows athletes to train more specifically and effectively on the Ironman run. Let me explain further.

Much like an athlete can train with power on a bike to build Ironman specific bike fitness, they can now train specifically using run power to build Ironman run fitness, instead of just trying to guess what pace or HR might be relative to race intensity.

In my new book, Run With Power, I present the speed per watt concept, which I call Efficiency Index (EI). EI represents how fast you can run for the watts you produce. Much like cycling, we have power zones associated with different intensities and energy systems. The Ironman run is anywhere from Zone 1 to Zone 3 intensity, depending on the speed of the athlete.

Most athletes would be well served training a lot at their Zone 2 power for running, such as in their long runs. With this type of training, improvements in EI show the athlete that their race specific run fitness is improving. Add heart rate data to this, and athletes can get a very good measurement of their aerobic fitness based upon the speed per watt at certain heart rates.

For Matt Russell, he ranged mostly between 300 and 320 watts throughout the race. His ability to maximize the pace of his runs at that wattage range will help him to build specific fitness to run well off the bike.

For Lionel, he can use this data to determine if the early watts were too high by comparing the zone he was running in. He can also use the power meter to better pace himself in the future to find the right wattage range.

Power has the potential to revolutionize run training and performance. Much like it has done for cycling, it can help define the specific intensity for the Ironman run. If you’re using power for cycling, it’s time to take the next step and start running with power as well.

About Jim Vance
Jim Vance is a Level 2 USAT Coach, an Elite Coach for TrainingBible Coaching, Head Coach of Formula Endurance, and is a former elite triathlete. You can find his training plans in our store here.
Visit Jim Vance's Coach Profile
#IRONMAN#RUNNING