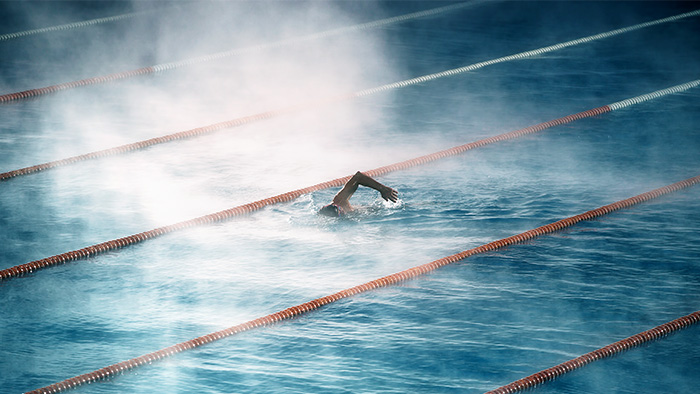 If you’re back in training and not seeing the numbers you’d like—you’re not alone. Here’s your guide to better understanding the importance of de-training and why your early season fitness gains might not be as slow as you think.

It’s February and —whatever sport you practice—in the last three months you’ve probably wrapped up your 2017 events, taken a small break, and then returned to training, dreaming about those 2018 races and the improvements you’ll make on last year’s achievements.

You’re rested, motivated, excited, and (insert record scratch here) slower than ever? WTF? Did I erase all the work I did last year? What am I paying this coach for? How will I ever reach those lofty goals I set for 2018? Will I even be able to match last year’s pace, power, or speed? I probably need to add some more speed and intensity, right coach? Yeah?

As a coach, I hear comments like this through TrainingPeaks every morning at this time of year. Heck, I’ve thought these thoughts before myself, and have sent those same worried messages to my coach: Hey man, the run went OK, but I’m so much slower than I used to be. I used to run 7:00/mile for my easy runs. Now that pace feels really hard. 6:00/mile used to be an easy track pace. Now it’s my all-out pace. Are we doing something wrong? Maybe we need to do more?

Two different processes result in the kind of desperation outlined above, one physical and the other mental. The physical process is the simple and established process of de-training and then re-entering training, and the second, mental process is called magical thinking. I’ll go through each, and provide athletes and coaches a toolkit for dealing with the combined effects of these processes.

De-training is part of development

Your coach made you take a break at the end of last season, right? Or maybe you knew you needed a break after a really tough year. I’ve been dealing with a grouchy and intractable left hip/SI joint/hamstring/sciatic nerve/calf/ankle for a while, now, and at the end of 2017 I eagerly awaited some time off from training.

Over four weeks following my final race I did as little as possible from a triathlon perspective, other than performing my physical therapy as if it were daily prayer. I went for a couple of swims, and twice bike-commuted to the pool where I run Masters practice.

I experimented with the Ketogenic diet, and learned that you can basically eat only cheese and not gain weight (but you might get sick of cheese, amazingly). I worked on my coaching business and did some continuing education I’d been putting off.

On December 13 I started back to training, following a schedule that included some lightly structured swims, bikes and runs. You probably already know the script. I was slow. Quite slow. As I swim, I usually eyeball the big digital clock that sits on deck and check my current pace against my supposed history as a swimmer, forming judgments about how that particular day is going. I don’t need to bore you with a diary of my swimming paces, but unsurprisingly I was swimming about 10 to 12 seconds slower per 100 meters at a moderate effort than I’d swam at the same effort only a few months before—and the same pattern repeated itself in my running and cycling.

This process is called de-training, and it is a long-accepted part of athletics. When you stop working out, the adaptations you incurred through training begin to unwind and disappear. A much less-accepted aspect of sport is the fact that periods of detraining are necessary to continue long-term development.

We all know athletes (maybe it’s ourselves) who do the same training year-round, never varying their approaches or periods of recovery, content to simply keep achieving the same achievements. These athletes worry, deep down, that if they stop training all of their hard work has been for naught, and it will take longer to reclaim their lost fitness after a break. Their identities orbit the accomplishments and numbers in their trophy cases (real and imagined), and a loss of fitness, for these athletes, is really a loss of self. They are terrified at the prospect of taking a break.

We know, however, that the principles of overload, compensation, and recovery are well-established, and that an athlete’s training (and subsequent development) looks more like a healthy stock exchange than a straight line: periodic corrections and losses, but an upward trend over time.

De-training (a market correction) plays a central role in getting faster. A proper plan builds in regular periods of de-training (in-season they’re called recovery blocks), and a bigger period at the end of the year. So make your peace with de-training—days and weeks of rest can be just as important as days and weeks of hard workouts.

Yes, your memory sucks. You make think you’ve got a mind like a trap, but it’s a lot more like a lobster trap than a bank vault: plenty of things (water, smaller Crustacea, fish, heck, even lobsters) flow in and out of your lobster trap of a memory.

Your brain chooses what it wants and needs to remember, selecting for positive (do that again!) and negative (stay away!) memories. Over time our brains refine those memories, continuing to lionize up the positives and drape the negatives with dread.

These re-dressed memories form an important part of our identities. As a coach I hear this kind of remembering all the time, usually in a statement such as one of the following:

There are two problems with thinking this way. First is that—as I said above—you’re probably misremembering things. Quick, what was the time of your best race in the last three years? No peaking or cheating, although that information is only a few mouse-clicks away. Got it? OK, now you can go look. Did you nail it? I’m guessing you didn’t.

We tend to romanticize those great performances, letting them form the bases of our athletic identities, and over time the remembered results or paces begin to creep faster and faster. This is an extreme example, but who hasn’t met someone who claims to run seven-minute miles in races, only to find out later that “seven-minute miles” apparently included running 7:59 per mile?

This kind of thinking is called magical thinking, and we do it both looking backward into the past and projecting ourselves forward into the future. I did it when I sent that note to my coach, claiming that 7:00/miles used to be my “easy” pace. So, intrigued, I went back and looked. Guess what? I was wrong. Like, really wrong. The same goes for my swimming. That “moderate pace” that was 10-12 seconds faster than my “newly returned to training moderate pace?” Actually it was only 5 to 6 seconds faster.

The second problem with thinking in this manner is that you’re using a fixed-mindset rather than a growth-mindset. As people, we really like to know where we fit in the pecking order, whether we’re talking about our local social structures, athletic leagues, or workplaces.

Being able to define yourself as “a 1:17 half-marathoner” or as having “a 300 watt FTP” clearly slides you into a particular stratum. That feels nice, especially if we perceive that stratum as being better than a majority of the people around us.

What isn’t nice, though, is that you are telling yourself a story, and that over time you’ll probably come to believe it. Running 1:17 for a half-marathon is pretty great, of course, but by saying that’s who you are, you are putting a limit on your ability to improve. Maybe 1:17 is the outer limit, but if you believe it is, I guarantee you that you’ll stay there forever.

Okay, so we’ve established that de-training is good and necessary. You know that you’re probably misremembering your past fitness, and that fixed mindsets (“I used to swim 1:23/100 every time I went to the pool!”) pose risks to your development. Great. That’s some good self-knowledge. You still feel slow today, however, in these early weeks and months of the season.

The most important thing not to-do is to freak out and start changing the plan. If you do too much too soon, you’ll just get injured, or sick, or injured and sick. You’ll also experience the isolation of abandoning the sensible plan of progression advocated by your coach. But that’s a “not to-do,” which isn’t as helpful as a “to-do.”

Here’s what I do (and what I suggest my athletes do): Each week I make a note in my TrainingPeaks workouts that articulates what pace/power/heartrate/speed I was able hold in that particular workout.

If I had trusted my memory, I wouldn’t have that powerful evidence, and wouldn’t have the confidence in my returning fitness that logging my paces and power generated. So don’t just trust your devices to upload all of your info! Leave your coach some notes tracking your returning speed. You may not be fast today, but you’ll know by looking at your log that you’ll be fast again soon.