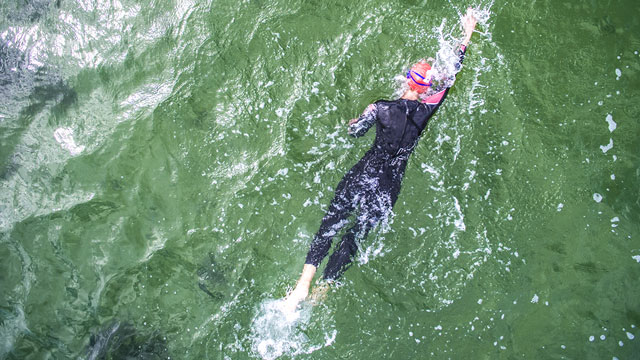 If you’re a triathlete, your swim training might look very different than a competitive swimmer’s. Coach Lindsey Leigh argues that shouldn’t be the case.

Let’s start with the kick. I often hear triathletes (and even triathlon coaches) saying triathletes don’t need to kick well because we wear wetsuits, which allow our legs to float. WRONG! Kicking does more than just propel us forward; having an efficient kick is key to helping us balance our stroke and creating less drag through the water.

I see triathletes reaching for their flippers on every single kick set because “they can’t kick fast enough without them,” or using their pull buoy throughout the whole workout because it’s easier aerobically to pull vs. swim. Well, that’s because they are doing every set with flippers or pull buoys! It’s ok to use flippers every now and then, and pull buoys for pull sets, but flippers encourage more knee bend, and will not help you become a more efficient kicker.

If you want to improve your kick, leave the swim toys at home (and this includes kickboards). Do kick sets on your side with your bottom arm extended overhead, and also some kick sets on your back, focusing on not allowing your knees to break the surface but making the water boil with your feet and kicking from the hip. I also like vertical kicking in the deep end, and once you get proficient at it, raise your arms overhead.

Let’s move onto another heated debate…do triathletes need to bilateral breathe? YES! I know it is awkward when you first try breathing to your non-dominant side, but I guarantee it’ll make your stroke more symmetrical, and it can fix common errors like crossing over and scissors kick. Most athletes I see who breathe only to one side have a very lopsided stroke, and/or are crossing over with the opposite arm when they breathe.

Bilateral breathing is also a useful skill to have when you’re in an open water race. Out there, you might have the sun or water current, or a fellow racer on one side, meaning you have to breathe to the other side. Start by practicing bilateral breathing during warm up and cool down so it does not impact your main sets. You can also include main sets that include different breathing patterns (for instance breathing every 3 strokes on odd laps, every 5 strokes on even laps).

Stroke…a four letter word to some of the athletes I coach when they see it in their workouts. Yes, I have my athletes do other strokes besides freestyle. Why? Well, it mixes up the monotony of always doing freestyle for one. But doing other strokes also improves your feel for the water, your balance and body awareness in the water, and it can build strength in other muscle groups. Other strokes can also be a nice way to stretch your muscles in ways freestyle does not (have you ever done a breaststroke kick after a hard run? Ahhhh.) Be careful adding in new strokes though; have a coach help you with your technique to avoid injury.

Diving is another useful skill for triathletes, as plenty of races have an out of water start off a dock or boat. Athletes who dive can gain seconds ahead of competitors who enter feet first and get in a better starting position and on faster feet at races that allow diving (some races, Like Ironman Louisville, do not allow diving).

At Worlds 70.3 in Chattanooga, I took notice to how many athletes were jumping feet first off the dock rather than diving, which surprised me and made me realize plenty of triathletes do not know how to dive or are fearful of diving. Be sure to always dive the deep end of a pool, and pay attention to your pool’s rules on which areas diving is allowed.

Triathletes also need focused swim sets that include sprints, threshold intervals, paced focused sets, long endurance sets, drill work, etc. Hopefully you’re doing this one already, but I still see triathletes swimming continuously for an hour every workout, not doing any sets and not changing speeds during the duration—or just doing the same workout every single swim session. Swimming is just like running and biking, you need to work on VO2 max, lactate threshold, and aerobic endurance if you want to see aerobic improvements.

Lastly, competitive swimmers often only race 50’s to 200’s (with the “long distance swimmers” racing the 500 up to the 1650) but they regularly swim >5000 yds six days per week (often more) in practice. The best way to get faster and improve your technique in the pool is to spend more time there. If you typically swim twice per week, try bumping that up to three or four times per week over the fall and winter. This will allow you to focus on technique and drill work for a few workouts, and pace-focused sets for a few workouts.

Triathletes have plenty to learn from competitive swimmers if we want to maximize our swimming speed and fitness, and fall and winter is the perfect time to focus on learning new technical skills. Remember to have fun in the pool, and maybe you’ll eventually get mistaken for a swimmer instead of a triathlete.

About Lindsay Zemba Leigh
Lindsay Zemba Leigh is a USA Triathlon and Training Peaks Level 2 coach. She’s also a certified strength and conditioning specialist and certified Nutrition Coach. She coaches triathletes and runners with No Limits Endurance Coaching (nolimitsendurance.com) and loves helping athletes achieve their big dreams. You can contact her via email at lindsay@nolimitsendurance.com.
#TRIATHLON