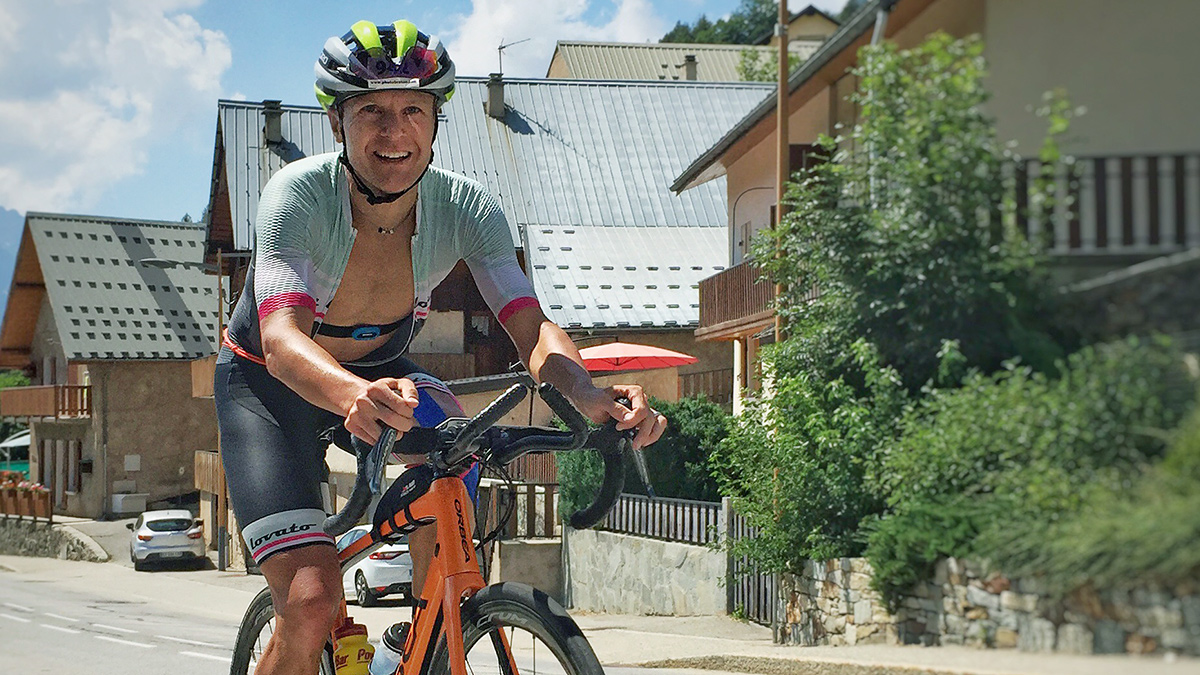 TrainingPeaks After Hours: An American in Huez

Michael Boehmer, Product Manager Researcher on the R&D team at TrainingPeaks, had the experience of a lifetime at the Alpe d’Huez Triathlon.

My wife Briana and I have been doing triathlons for a long time (15 and 19 years respectively) but wanted to see more of the world through our racing. In 2016 we decided to try IRONMAN Austria in Klagenfurt, and in 2017 we headed to IRONMAN Frankfurt. Both adventures were amazing, and we saw parts of Europe that we never would have explored otherwise. For our 2018 adventure, we were inspired by a friend, Claire Shea Simonds, who posted early in the season about doing the Triathlon Alpe d’Huez along with a training trip.

As you probably know from its prominence in the Tour de France, the Alpe d’Huez is not an easy climb. With its iconic switchbacks, it has been included in 30 tours de France (twice in one day in 2013) and features an average grade of over 8% over 13.2 kilometers. As part of the triathlon course, it would be situated after two other major climbs: the Alpe du Grand Serre and the Col d’Ordnon. Plus, it’s in France, where we’d never been. We were in!

Claire had procured an amazing cottage in a village near the top of the Alpe d’Huez, which was accessed across the top of the cliffs above Le Bourg-d’Oisans on a tiny one-lane road protected by a little wooden fence. It was an amazing drive into this location, and upon arrival, we had a view of the entire valley and peaks of the Alps.

3 days before race day, we checked out the bike course, riding up the Col d’Ordnan (in reverse) and back down to see the descent, which Claire recommended, as it was a little technical. It was definitely a good idea to get a look at some of the tighter switchbacks, as well as straightaways where we could let off the brakes a bit. After the descent we made our way to the Alpe d’Huez. We found the notorious climb packed with cyclists from before sunrise to after sunset. Hundreds, if not thousands of people seemed to be riding it every day, testing their legs and their lungs. We found it challenging but felt prepared; after checking it off the recon list we knew we would be fine on race day.

I had an idea of what I wanted to do in the days before the race: a shortened version of the Marmut Gran Fondo. The abbreviated route we rode removed the final climb up Alpe d’Huez, but covered the Col du Glandon, Col du Telegraphe, and the Col du Galibier, making for one of the most fun days I have ever had on a bicycle. In total Briana and I were out for 11 hours, with 7:45 in the saddle, and 16k feet of vertical over 100 miles. After that slightly-longer-than-planned preride, we rested the day before the race, just taking care of registration and normal pre-race tasks.

It was a wee bit longer than I thought it would be, but that was my fault, should have recalled that 1000VAM is pretty fast, so 5km of climbing might take more than 5hr in and of itself. Plus, all the valley-girl riding and descents (on that note, do I get to add those extra miles of climbing to my distance/speed for the ride? I feel like I should get more credit for it!) Overall, just a really, really fun day on a bicycle. Contemplated another 15 min in the saddle, but decided this was enough and 8hr is just a number! Legs are tired, but never had any cramping feelings. Back was pretty good, bottom was very tolerant, and got a few nice pics 😉 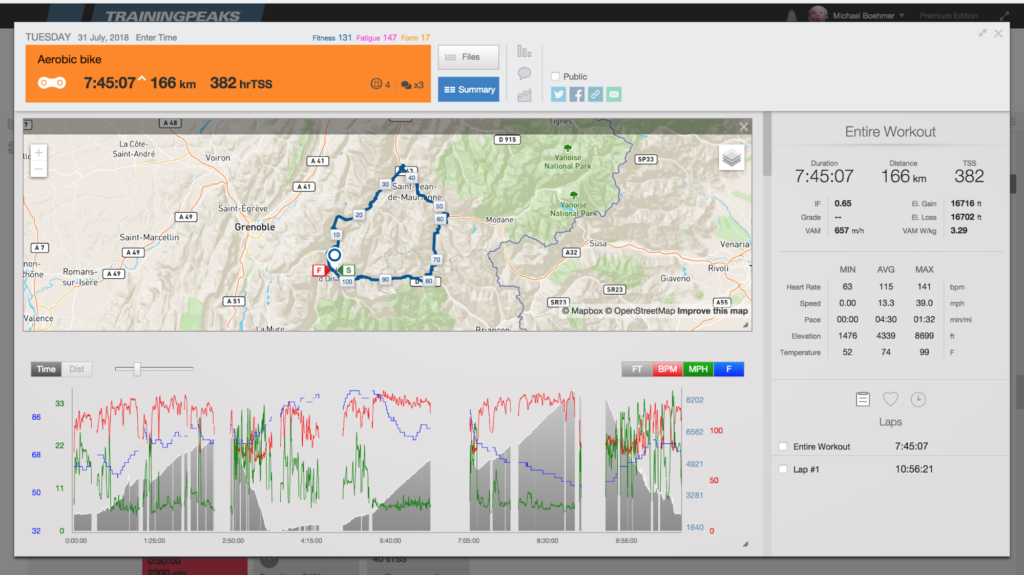 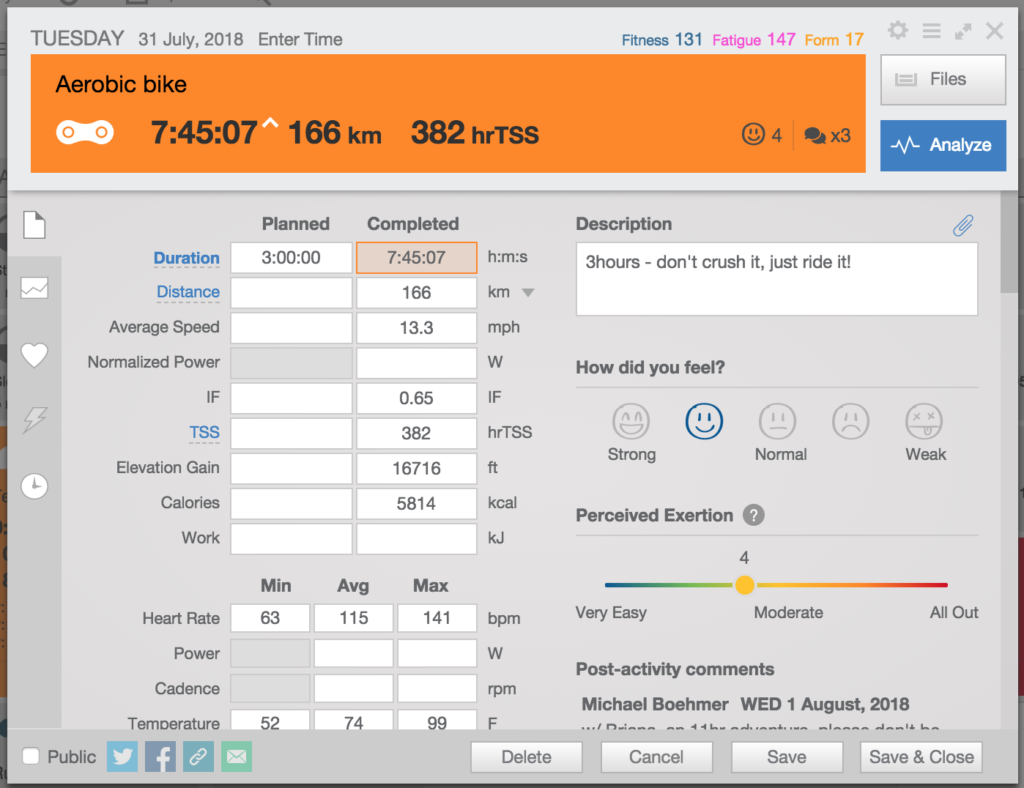 On race day, biking to the start made sense, so a friend, “Welsh Wonder Nerys” [Jones] and I rolled to the mountain lake start, logging a nice little warm up along the way. Of course, it was measured and uploaded to TrainingPeaks!

The water temp was chilly, but not frigid at 18C. It was also a mass start, which seems to be quite rare in triathlons now. It was really fun knocking around with some other people for the first 300m and in each corner. The water was beautiful and I finished about where I would have expected to come out, just under 37 minutes for 2.2km. I took my time in transition, because had to pack up our swim gear in a large bag for delivery at the finish line, and I didn’t want to risk everything getting soaked from my wetsuit! 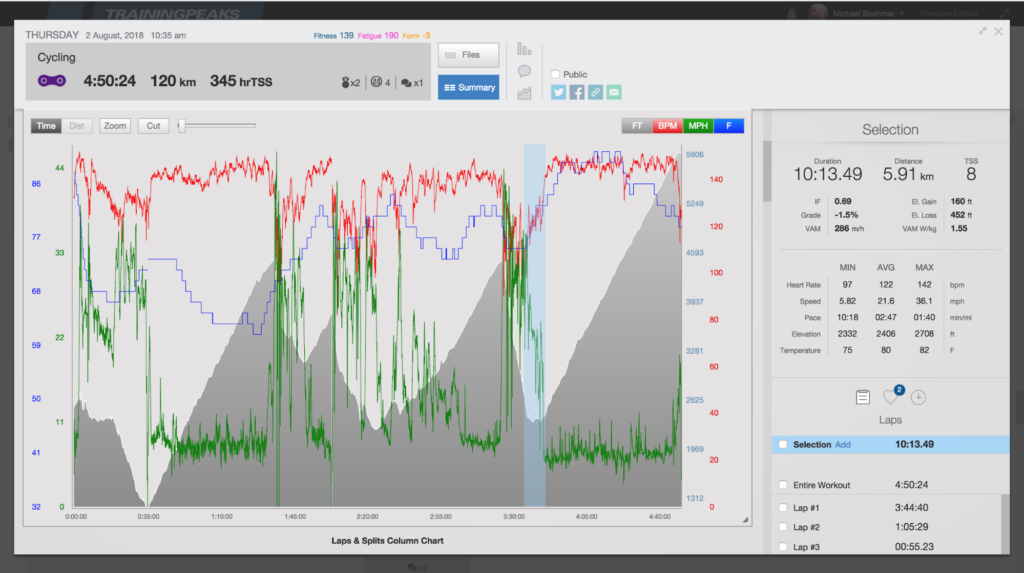 The bike leg started with gentle downhill, but due to a slight headwind, we didn’t move as quickly as expected. I was riding my road bike with mini clip-on aero bars, and a few TT bikes flew by, but I think everyone knew that would be short-lived with all the climbing ahead.

My goal on all three climbs was to maintain a regular heart rate (my road bike does not currently have a power meter). I knew my HR would be rising throughout the course of the day, so I had hoped to stay in the bottom of zone 3 through the Alpe du Grand Serre (the first of the three major climbs). But it was not to be—possibly due to excitement, or possibly due to the hard day earlier in the week, I found myself squarely in HR zone 4 throughout the climb.

I did a quick physical check-in and felt that my effort was in check, not straining, so I went with it. Over the top we had a fun, but short descent before a small climb. I used this climb as an opportunity to mix up the 2nd bottle of my special energy mix, and stopped at the top to add water. The descent off the back was very gradual and more like riding in a valley for the next 45 minutes, which was a nice chance to mix up my riding position before we started the 2nd big climb; Col d’Ordnon.

The Col d’Ordnon was very gradual at the bottom, letting me stay in my aero bars a bit more (BestBikeSplit recommends that you stay down at any speed over 15mph). The last 3km kicks up and feels more like a mountain climb again, and I felt great coming over the top. My HR was almost identical to the Alpe du Grand Serre and still felt controlled. Having looked at the descent on our first ride, I knew what to expect, and was able to fully enjoy it, knowing we had just a short valley spin before the final ascent on the Alpe d’Huez.

The bottom of the Alpe d’Huez is the steepest bit,  but again I knew this from the pre-ride so I made sure to keep the effort in check, knowing it would get “easier” as we went up. I felt really good and would stand periodically just to stretch and help relieve some “hot foot” issues I was having. Even sitting at the very top of HR zone 4, my perceived exertion was probably sitting at 5/10. I had no idea where I was in the race, but was ticking off people throughout the climb, rolling steady and smooth. It didn’t hurt that I had the best cheering crew: Briana was near the top of the climb with our housemates with some great signs to cheer me on. Their support definitely made me smile and helped me to finish strong. 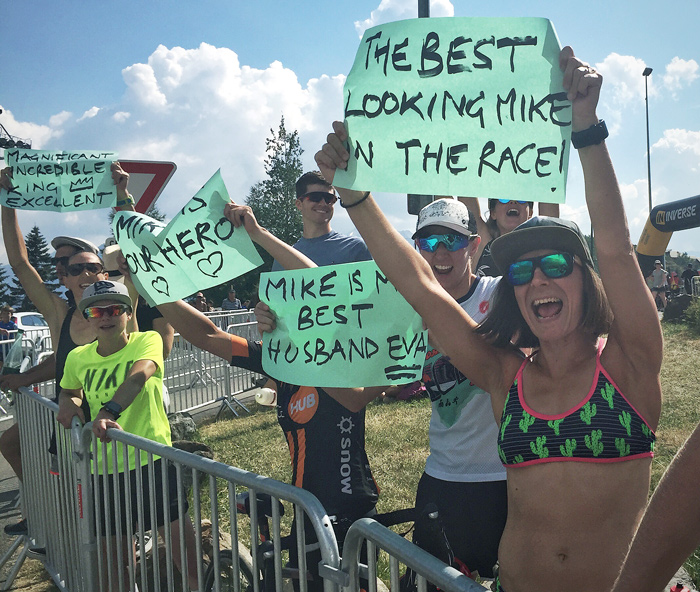 No one would call the Alpe d’Huez easy, but I would say that for this race, most of the difficulty was related to the fact that it came at the end of the ride. I was also a bit concerned about coming off such a long, hard climb and rolling straight into a 20km run. As it ended up, I had less than 90 sec from the end of the climbing, until I dismounted my bike. Ouch, I thought, this is not going to feel good! 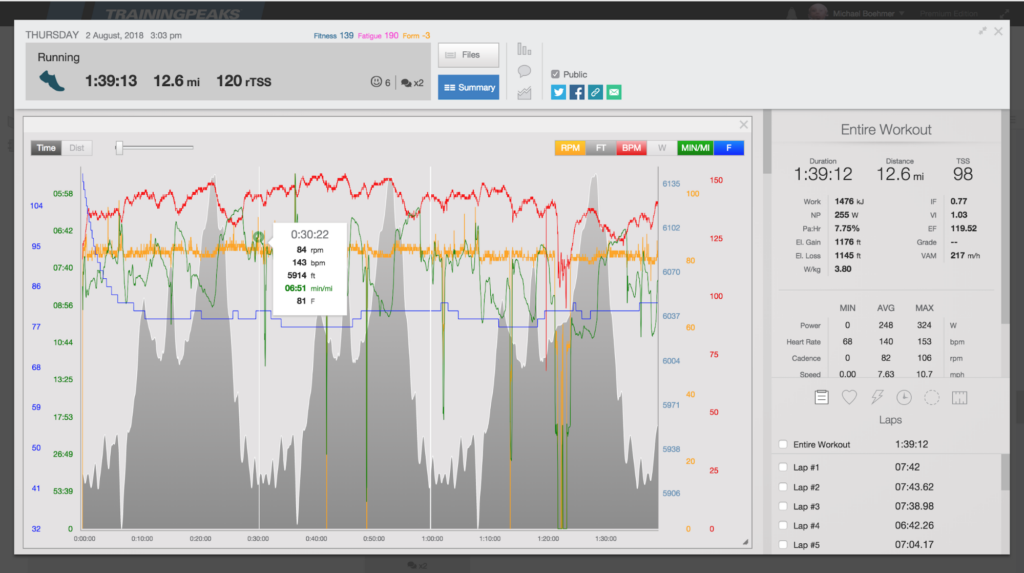 Just like in T1, I took my time and didn’t rush out of the transition. I had been dealing with a “sassy” knee since February so I had taped it up before the race. I was a little leery about how it would handle the 300m of climbing over the 20km run course, particularly because each of the three loops finished with a massive pavement descent. But off we went to find out! The first lap felt good, steady, smooth, nothing of note, same on the 2nd, basically split 31 minutes for both and was feeling really good. 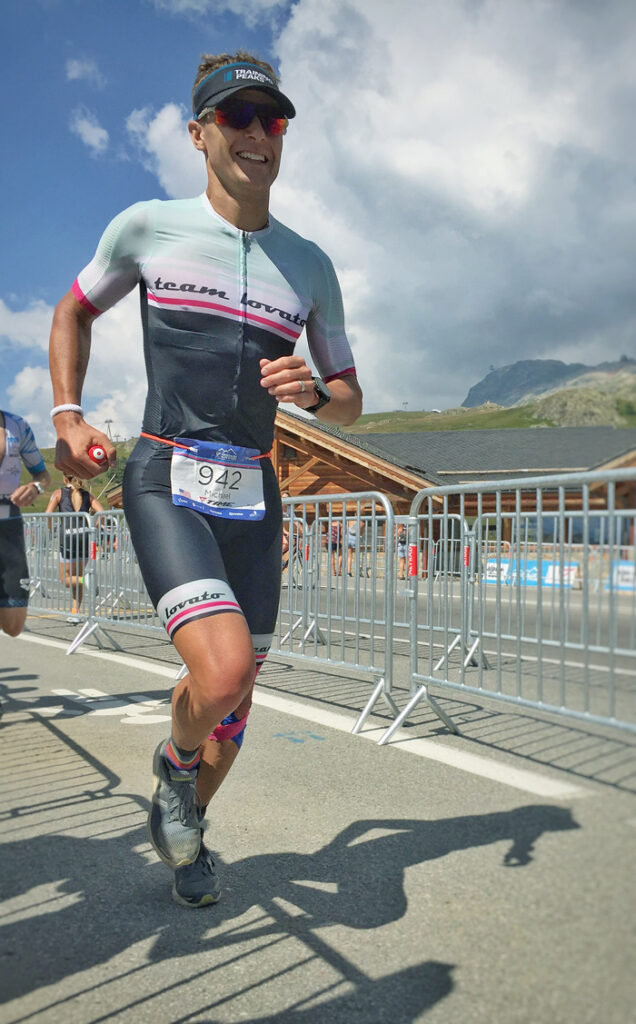 The cheering squadron had parked just outside T2, which we passed twice on each loop, so I was able to get the little pick-me-ups each time (and read all the fun signs). With 6000 ft of vert and some good distance on dirt, mile splits weren’t super useful, so I just relied upon my effort to pace most of the run. Still, as I was starting lap 3 I knew it was going to get tough; my quads were really starting to feel the 6+ hours of racing.

I knew I was running well, as I had only passed people and had not been overtaken, so just wanted to see how close I could get to 31 minutes again for my last lap. I was feeling good, but with just one climb and descent left, my arch-nemesis reared its ugly head: just after the last aid station, I tossed my bucket of “cookies” all over the side of the road. I was only 3km from the finish line, so I wiped my chin and just got back moving, albeit a bit slower, just to keep things in check. I cruised down the last hill, through the dirt, and up the finish chute to my cheering section.

What a race! It was so much fun to test myself in such a different way and enjoy the mountains on a beautiful day in France. I will be back! Maybe to ride a bit less before the race; a bit more after, and make some more friends along the way. After driving and eating our way through Nice and Paris for a week after the race, the one thing I have to say is that France really knows croissants and coffee. I will happily go back any time and try to eat more of them. 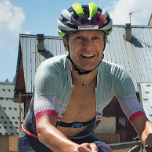 About Michael Boehmer
Michael Boehmer is the Product Manager and a Researcher on the R&D team at TrainingPeaks. He is a Wisconsinite at heart with a great fondness for cheese and ice cream, but he has tolerated the move to his wife Briana’s home state of Colorado. He has always loved the mountains and all the fun you can have in them whether on his bicycle, in his sneakers, or sliding about via skis. He’s been racing and coaching in the world of triathlon since 1998 with a few amateur national and world titles. You can always spot him with a sideways swim cap or waving at the camera and having fun on the course.
#INSPIRATION#TRIATHLON