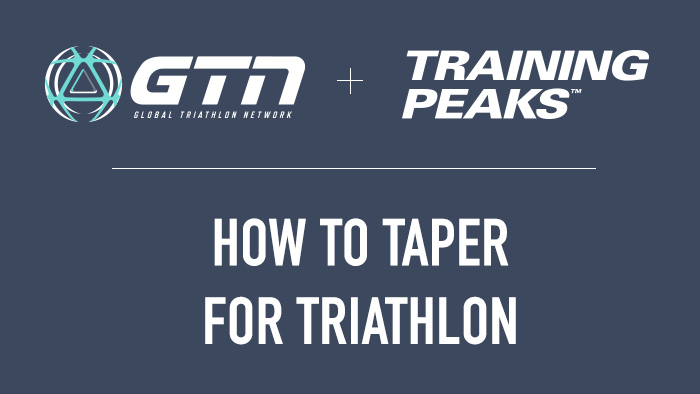 GTN Presents: How to Taper For a Triathlon

Global Triathlon Network’s latest Triathlon Training Explained offers up all you need to know to nail your next taper so you arrive on the starting line fit, refreshed and ready to perform.

As part of the partnership between the Global Triathlon Network (GTN) and TrainingPeaks, we’ll be bringing you twice-monthly episodes of the new “Triathlon Training Explained” show, where hosts and former pro triathletes Mark Threlfall and Heather Fell answer your triathlon training questions with the help of TrainingPeaks software, coaches and industry experts from around the world.

Tapering, otherwise known as the gradual decline in training load in order to peak on race day, is an individualized process. You’re theoretically losing fitness, but at the same time your fatigue is reducing and your form is improving, so it’s a question of how much fitness you need to lose in order to get the necessary form and energy you need on race day. That is a very delicate balance, and one that can physically and psychologically mess with even the most seasoned athlete.

In this episode of Global Triathlon Network’s Triathlon Training Explained, Fell asks Olympic coaches and professional athletes how they plan for a taper based on the type of triathlon and it’s overall importance within a season. For example, an IRONMAN taper is much longer and more complex than the taper for a mid-season Olympic-distance race you’re doing as a tune-up for your goal race of the season.

Check out the full episode below to learn what not to do in the week before a race, tips for how to reduce your weekly load accordingly, as well as the critical role that intensity plays in an optimal taper.

Triathletes in the know like GTN’s Mark Threlfall and Heather Fell use TrainingPeaks to help plan, track and analyze their training. Dial-in your triathlon training with a free 14-day Premium Trial today!

About TrainingPeaks
The staff at TrainingPeaks includes passionate athletes, coaches, and data enthusiasts. We're here to help you reach your goals!
#OLYMPIC-DISTANCE#TRIATHLON