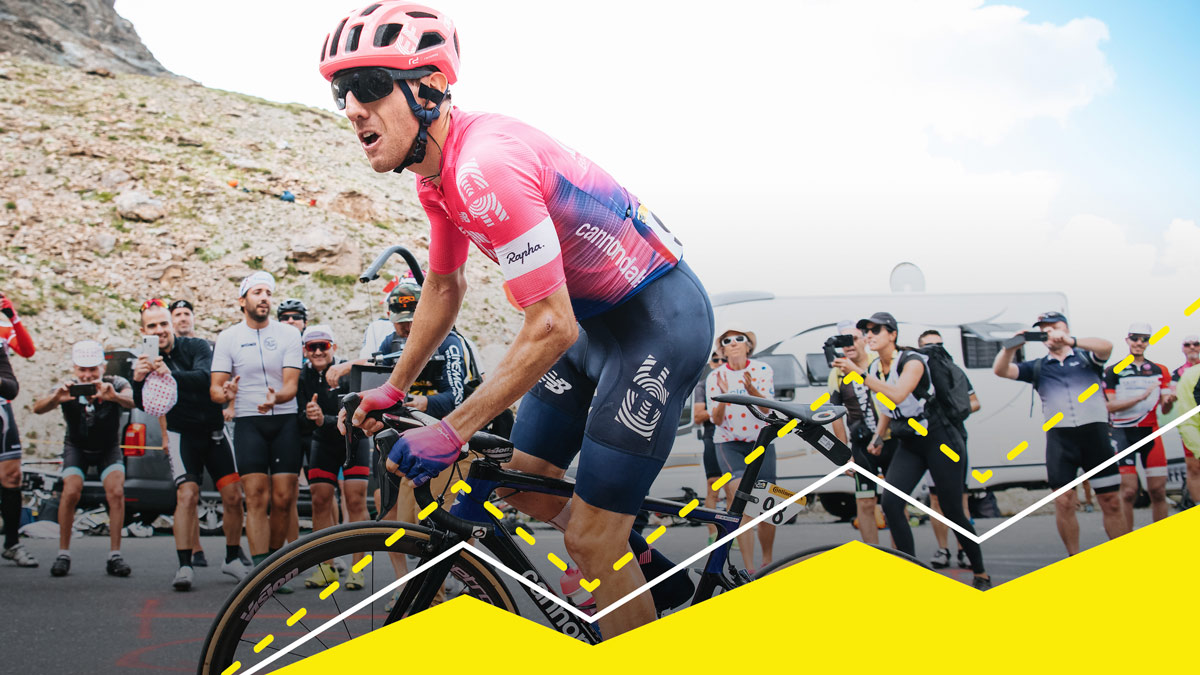 See Michael Woods’ data from the break on stage 18; the last un-shortened stage of the 2019 tour and a high-altitude test for the world’s best riders.

Stage 18 was dominated by the high-altitude climbs of the HC COL D’IZOARD (2 360 M) and HC COL DU GALIBIER (2 642 M). This was a day for the climbers adapted to high altitude, and it was the Colombian Nairo Quintana who would take the advantage, leaving his fellow escapees, which included Michael Woods, to take a solo victory. We were lucky to see Michael’s file from the day.

Michael Woods was again to the fore in the high mountains. Having suffered his way through the Tour with broken ribs, this stage saw Michael back to his best and in the front as the riders hit the big mountains.

Like the Pyrenees, the early break was not easily let go. The peloton was trying to control the riders who would make up the early move, meaning it took nearly 1hr of racing for the elastic to snap. One of the most aggressive riders early in the stage was Michael Woods, who can be seen pushing the pace high in the early Cat 3 climb, CÔTE DES DEMOISELLES COIFFÉES. It says something about the motivation within the peloton that this very hard early effort was not enough for Michael to break clear.

It was on this opening climb and in the lead up to it that Michael produced his peak powers for 2min, 5min, 10min in the opening 13km of stage

Over the top of this climb, four riders broke clear, but this did not stop further attacks from riders hoping to join the leading break. Between the first climb of the day and the second (Col de Vars), Michael joined the leading four riders, eventually going clear with a large group that would go on to dominate the stage. While bridging the gap Michael produced his peak 20min power of the day.  Normally you would see peak sustained powers (5min+) done on the mountains, so this goes to show the intensity the riders were doing on the flat, and how the altitude affected the riders’ power outputs.

It took nearly a full hour for the break to go, and it wasn’t an easy hour.

The hard section between the first two climbs, when the break forms:

Michael makes the junction to the leading 4 riders. As the bunch is very aggressive, Michael does his peak 20min and 30min power on this section of road.

It was on the Col de Vars that the leading break really started to edge out its lead over the peloton. Good cohesion within the group allowed them to put 7:30min on the peloton, mainly due to the hard pace set by the Movistar team, which had three riders working to put Nairo Quintana in an opportune position for the stage win.

Riding in the break on the climb at steady tempo.

With altitude ranging up to 2600m, and with three climbs all over 2000m, the riders who were conditioned to altitude were the ones who dealt best with this course. Typically, riders will see a drop anywhere from 8-12% in Functional Threshold power at 1500m to 2600m, depending on how acclimated they are. This needs to be considered when looking into Michael’s data, and we have broken down each climb to show the time spent over 1500m.

The high altitude continued as the race went from the Col de Vars to the massive HC Col d’Izoard. This monster of a climb takes the riders up to a height of 2275m. It was on the Izoard that the pace was to get too high for many within the leading break with many of the original leading group were dropped in the last 7km. Michael was to the fore attempting to maintain a good lead over the peloton, which was now only 5 ½ min behind.

The most intense part of the stage was on the last 7km of this climb, as Michael pushed hard to keep within the head of the race. This was one of Michael’s hardest efforts done at an altitude.

With 43km to go, Michael was riding strong, and went with the four leading riders who tried to get a gap on the rest of the break before the start of Galibier. Michael did 421w, 7.02w/kg for 1.3km, 1:36min, in order to make sure he was in the front half of the split.

It was on the Col du Galibier that eventual stage winner Nairo Quintana took off, leaving Michael and the rest of the break behind. At 2000m-plus, the altitude would have been a major factor for many of the riders as they struggled to follow the attack. That said, the pace on this climb was actually the fastest ever recorded. To be at the head of the race at this time was more impressive riding from Michael after a very impressive Tour.

*It was on this section that Woods made the first attack from the leading group, before the winning counterattack by Quintana.

Over the top of the Col du Galibier, Michael was in the top 10, and finished with a surging Egan Bernal. This was a massive day in the mountains; with 32% of the stage ridden over 1500m (a total time of 1hr 49min), this will be a very hard day to recover from, and one that will play a massive part in the coming stages.