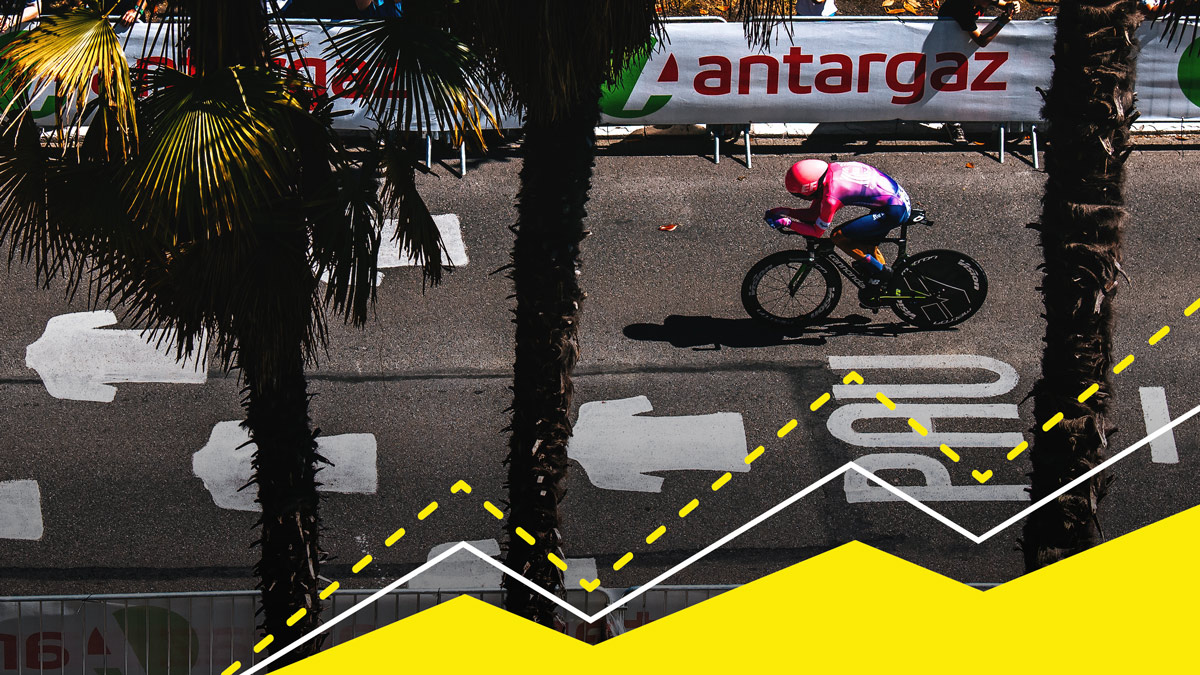 Cadence and cornering made all the difference between these two heavy-hitting Time Trial specialists on a technical, hilly individual time trial.

Stage 13 was the only individual TT of this year’s Tour, and, as expected, was pivotal in clarifying the potential final winner. The course was short and undulating with many twists and turns, and the ultimate victor was the storming Julian Alaphilippe, who excelled on the twisting circuit and short climbs. This was no doubt a route that played to his strengths.

The sole TT of the Tour de France was always going to be a big aim, not just the riders going for the overall classification but also for the TT specialists hoping for a stage result. We are privileged to have three TT powerhouses share their data, to allow us to breakdown their performances.

Joseph Rosskopf (USA) CCC Team is a two-time National TT champion in America (17’ 18’) and has two top 20’s in World Tour TT’s so far in 2019. Alex Dowsett (GBr) Katusha-Alpecin is the current British National TT Champion. He has won this title six times (11’ 12’ 13’ 15’ 16’ 19’) and was a previous world hour record holder. Both riders are extremely experienced in this discipline, and it showed in their results.

Rigoberto Uran is the team leader for EF Education First, and while not known for his Time Trialing, would no doubt have been trying his best to minimize losses on this day. His file came in a little later than the others (things, understandably, get busy at the Tour), so it’s not part of the major analysis, but his rough stats (below) provide good context for the rides of Rosskopf and Dowsett.

With such variable terrain in the 27km TT it was crucial that riders measure their efforts in specific locations; using precious watts only in areas which would bring the biggest gain was part of every rider’s strategy. Within the first 15km of the stage the riders faced a long climb of 2.3km, another short steep climb of 1km and a 2km drag at 3 percent. This opening half of the ride was crucial; it was during this first half of the ride that both Alex and Joseph put out all their peak powers from 2min to 20min.

The most noticeable difference in this first part of the stage is the cadence between both riders; Joseph consistently pedals over 100rpm, while Alex prefers to grind.

It was on this first climb of the stage that we see the first gaps starting to open between these two riders. Joseph put 10 seconds into Alex on this 2.3km climb, spinning a high cadence of 104rpm compared to that of 92rpm of Alex. The slight weight advantage which Joseph has over Alex will have also played a big role on this climb, enabling him to hit 6w/kg for the effort lasting just over 5min long.

Over the top of this first climb was the riders still faced some rolling roads and a steady drag of 1.69km at 3 percent. It was again on the slight uphill that Joseph made the difference compared to that of Alex. On this drag Joseph did 422w, 5.7w/kg for 3:04min at 106rpm, Alex rode this section only 11 seconds slower at a power of 419w, 5.33w/kg at 95rpm.

The first real downhill after 11.2km would have been a welcome sight to many riders after having used a lot of matches in the opening climbs. But this downhill was technical, with six corners to negotiate at speed. The fastest lines would have been really important to maintain speed using the least possible power. What we can see when comparing the data between Joseph and Alex is that Alex used his downhill and cornering skills to the utmost, which helped him come down the descent slightly faster than Joseph, and using a lot less power to do so.

The speeds taken by Alex into the corners and exiting the corners where generally 5kph faster than Joseph, which meant Joseph had to make some big spikes in power to get back up to speed. Also, on the straights between the corners we can see that Alex keep the pressure on the pedals slightly more, which enabled him to maintain a high speed and hit the corners slightly ‘hotter’ compared to Joseph.

(This is where Dowsett lost most time to Rosskopf)

There was a nasty surprise awaiting the riders as they finished the fast descent; a 1km climb at 7 percent. Joseph was to use his lighter frame and high cadence to really power on this hill, and got up it 17sec quicker than Alex. Again, the impressive high cadence by Joseph of 106rpm on the 7 percent grade shows his ability to produce a high power in the saddle a low torque; a fantastic attribute to any TT rider wanting to excel on the rolling circuits. It was on the climb that Joseph produced his peak 2min power for the day.

In what was really the only long flat straight of the course where a consistent power could be put down was in the run into the finish as the riders hit with just over 9km to the finish. It was at this location the more powerful riders will have been able to make up any deficient on the smaller punchier type riders who may have had an advantage up to this point. Alex probably felt at home on this section as he was able to use his big engine to complete this part of the course in just over 6min and taking 4sec out of Joseph over the 5.58km. Again, we see on this section that Joseph still maintained his high cadence of 107rpm as he kept a steady effort at 402w. The riders where now on the home straight as they entered the outskirts of the city of Pau to tackle the last obstacle of the stage.

The final kilometer was dominated by the steep section of road, which riders hit with just 450m left to go. On the steepest section the riders faced 16 pecent for 80m, which would have been a terribly painful way to finish a TT, especially after having been in the hurt box for over 35min. On this steep section of road both the riders put out a massive effort, producing their best 10, 12, 20 and 30sec efforts on this steep berg. Joseph went up this 16 percent section in 17sec at 661w, 8.93w/kg and Alex power up in 19sec at 693w, 8.82w/kg. Again, it was on the climb that Joseph was to make the biggest difference to Alex within the last kilometer of racing.

In what was one of the most exciting Time Trials in recent years, stage 13 of the Tour De France proved to be a demanding course and one that required expert pacing and using your best characteristics at the right times in order to get the most out of stage. Thanks to all three of these riders for sharing their data.