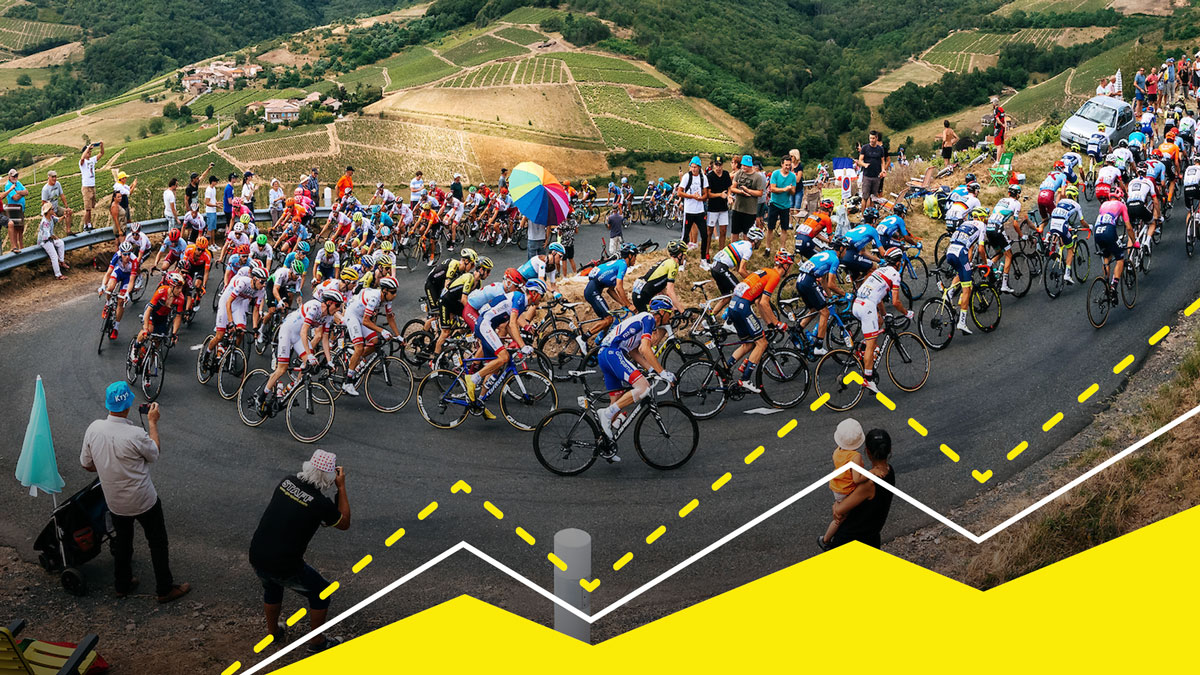 Tour de France 2019: Attempting to Catch the Break on Stage 8

See how Tanel Kangert and team EF Education First worked to chase back a dangerous break in the final 50 kilometers of stage 8.

Stage 8 was another exciting day at the Tour, with Julian Alaphilippe reclaiming the yellow jersey with an impressive late-stage attack. Yet the main talking point of the day was the incredible win by Thomas De Gendt. The Belgian breakaway specialist did the unthinkable, attacking from kilometer 0 and staying away to win solo on the hardest stage in the race so far (as the data will show). With 3800m (~12,500 ft) elevation gain, this was a very hard day for everyone, and the accumulated fatigue will no doubt affect riders in the coming weeks.

Overall Stats for the stage

Tanel Kangert played a key role for EF Education First in the final 40km of the race. With the peloton whittled down to a select 60 riders, Tanel provided the firepower to keep the tempo high for teammate Michael Woods, who fancied his chances of a stage victory with such a hilly finale.

Unfortunately, Michael suffered a crash at 15km to go, which was the end of his stage ambitions. What the final did show was that EF Education can put the pressure on over hilly terrain and be major players in the final result.

Attacks from the start

Given the course profile it was unsurprising to see attacks from the drop of the flag, and it was also unsurprising to see that the rider who instigated was the eventual stage winner, Thomas De Gendt (Lotto Soudal). That said, the potential for an early break to succeed on a day like this was always dependent on the strength of the riders in it.  Fortunately for De Gendt, he was joined by world-class riders Niki Terpstra (Total-Direct Energie), Alessandro De Marchi (CCC) and Ben King (Dimension Data), giving the break more than a fighting chance.

However once the break was established, the peloton was content to settle down, allowing riders to coast a bit before the action started on the first climbs. During this 34km period (50:28 min) Tanel averaged 201w, 3.04w/kg and an average speed of 40.5km.

On the first climb of the day, the Cat 2 Col de Croix Montmain, (6.1km at 7%), BORA-Hansgrohe’s Marcus Burghardt and Team Sunweb’s Chad Haga were sent to the head of the field, where they could be seen driving the pace.

The tempo within the peloton was continuously ramped up between kilometers 50 and 150, with Kangert’s power-to-weight starting around 5w/kg on the first climb and reaching 5.6w/kg by the time the field hit the Côte d’Aveize (5.2km at 6.4%). The pace within the leading group of 4 also increased, and two riders were dropped on the Aveize climb. Only Thomas De Gendt (Lotto Soudal) and Alessandro De Marchi (CCC Team) remained in the lead.

The leading group was now down to 2 riders as Niki Terpstra (Total-Direct Energie) and Ben King (Dimension Data) lose contact with De Gendt and De Marchi.

When the field reached the penultimate categorized climb of the day, the Cat 2 Côte d’Aveize (5.2 kilometers at 6.4%), the pace was moved up another notch as Astana sent their team the front. It was at this point that the peloton really started to fragment, eventually shrinking to just 60 riders by the time they hit the top of the climb (50km to the finish). With the possibility of the leaders staying away becoming very real, EF Education sent Tanel and a number of other riders to the front to try and close the gap.

High pace now being set by Astana at the front of the peloton, note the big increase in effort up to 5.6w/kg

After a short downhill following the Côte d’Aveize the peloton hit a hard section with uncategorized climbs. It was on these uncategorized climbs that Tanel set his peak 10 and 20min powers for the day, setting a relentless pace to reduce the gap to the leading duo.

It wasn’t over yet. Tanel went on to set his peak 1hr power for the day, as he continued to fight hard with his teammates for the final 20+ kilometers to bring back the leaders. The Estonian was one of the key riders setting a high tempo from the bottom of the Côte d’Aveize until the bottom of the final climb of Côte de la Jaillère—there Kangert’s job was finally done.

On the final climb of the day, having lost contact with what was left of the bunch, Tanel was still able to set a steady pace of 310w, 4.68w/kg to the finish. The total work throughout the stage was massive, and many riders reported that this stage was as hard or harder than stage 6 to La Planche des Belles Filles. With a total TSS around 300 and with nearly 5000kj used, this was another hard day in the saddle for so early in the Tour.