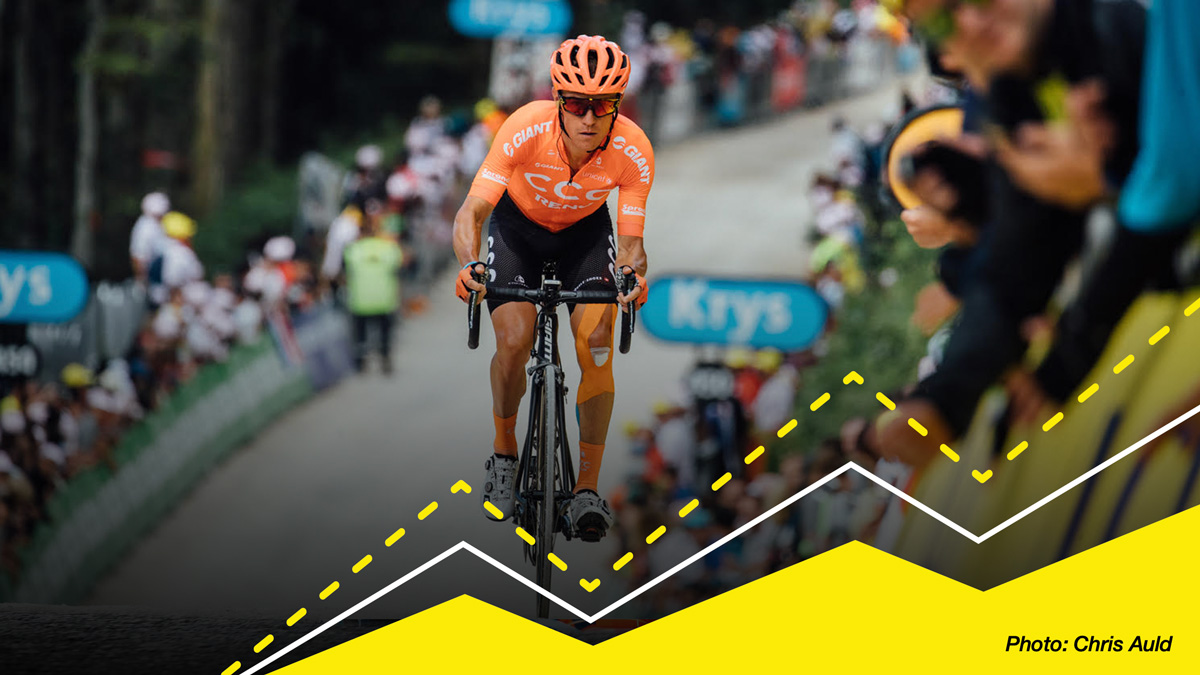 Tour de France 2019: Comparing the Break and the Peloton on Stage 6

Stage 6 was an early reckoning for the GC favorites. Here we’ll compare power data from a rare successful break and the peloton on this brutally tough day.

Stage 6 of the Tour de France was the first real test for the GC contenders, with seven categorized climbs and the first mountain top finish on La Planche Des Belles Filles—with a twist. The “Alpe d’Huez of Eastern France” gained a kilometer for 2019, with a gravel section in excess of 20%. The stage did not disappoint, and a strong early break got a big enough gap to hold out to the end.

Some GC contenders (Mikel Landa, Geraint Thomas) flexed their muscles, and others faded dramatically (Romain Bardet, Tejay Van Garderen) in the final kilometers. The victors of the day were both tour debutantes: Dylan Teuns (Bahrain-Merida), who won the stage, and Giulio Ciccone (Trek-Segafredo), who came second but snatched the yellow jersey from Julian Alaphillipe by just six seconds.

In this analysis, we’ll look at the files of two aggressive and experienced riders who helped initiate and maintain the successful break, as well as another first-time Tour rider and domestique who spent the day with the main field.

In the Early Break

With today’s stage being the first step into the mountains, there was little chance for an early break to succeed. However, the group was full of big engines like Nils Politt (Team Katusha Alpecin) and accomplished climbers like Serge Pauwels (CCC), who were very aggressive from the start in order to make this leading group.

The effort to open a gap on the peloton is always very tough, and as we often see in the Tour de France, several peak powers for the stage were set in the opening kilometers. Pauwels’ power in his first big attack of the day was a massive 10sec effort at 806w, 12.4w/kg with a max at 952w, 14.76w/kg, and the pace did not let up from there.

It was crucial that the break ride very hard to open a gap as quickly as possible in order to cement their lead. In the next 5min of racing, Serge averaged 394w, 6.07w/kg and an average speed of 51.7kph. In fact, he produced all of his peak powers from 2sec to 5min in the opening 5km.

It was the pace and power that Pauwels and his fellow escapees rode in the opening 25km (before the first climb of the day) that opened a very significant advantage over the peloton. Without such pace and a great cohesion in the group, the breakaway would have been unable to succeed at the end as it did.

We can see the cooperation of the front group when we compare Serge’s file with Katusha-Alpecin’s Nils Politt (Ger). Despite being in somewhat unfamiliar territory, the Rouleur and Classics specialist managed a fantastic effort for his team and the leading group.

In the tables below we can see that the normalized average power of Pauwels and Politt for the first 49.2km of the stage (until the highest point of the day on the Grand Ballon at 1327m) was within .2w/kg. This shows that both of these riders were committed to working hard within the group, and that the pace was consistent throughout this first section of the race. W/kg (power-to-weight) is the best indicator to rate their effort here, as it was a constant uphill drag almost from the gun until the top of the climb.

The pace within this leading group remained high, as the fight for the King of the Mountain points was repeatedly instigated by Lotto-Soudal’s Thomas De Gendt and his teammate, the current mountain classification leader Tim Wellens.

At 40km to go, on the Col des Croix (3.2km at 6.1%), the breakaway finally started to split as De Gendt went solo over the top of the climb. 15km later, on the Col des Chevrères (3.5km at 9.5%), the pace began to ramp up as peloton started to increase pressure from behind; at the start of this second-to-last climb, the Movistar-led peloton had whittled the gap down to 5:30min.

Nils Politt was dropped on the lower slopes of the climb, before the steep part even began, while Serge Pauwels maintained contact until a little further up. Serge produced some of his most relevant peak powers for the day on what proved to be the most intense climb of the day for many riders, both in the break and within the peloton.

As the race headed towards the final showdown on the mountain top finish of La Planche des Belles Filles (7km at 8.7%) it was still unclear whether the leading riders would be able to hold off the peloton and fight it out for the stage win, and possibly even the yellow jersey. The peloton was now chasing hard, but rapidly losing firepower as riders succumbed to the repeated, punchy climbs. Even team Ineos (formerly Sky) looked far less composed than usual.

At the bottom of the final climb, Serge and several other riders who had been dropped from the original break still had about 2min advantage over the chasing peloton, and were therefore still in contention for a top result. Serge managed to stay in front of the rapidly shrinking peloton until halfway up the last climb with a hard tempo of 334w, 5.15w/kg for 13:23min.

It was an extremely hard day for Serge and the other riders in the break. With a total TSS score of 321 and with 4803 Kilojoules burned during the stage, he will no doubt be thankful to turn over the work on tomorrow’s flatter stage to the sprinters.

Jack Haig is taking on his first Tour de France at the age of 25, having already had fantastic showings at last year’s Vuelta a España, and many other hilly races. Jack is here to be a key domestique for Adam Yates when the race heads into the high mountains, so his job on stage 6 would have been to conserve energy and keep his team leader out of trouble.

Compared to the explosive data from Pauwels and Politt in the break, the opening 35km were relatively comfortable for riders hanging back in the peloton. Still, we can see that this stage was no walk in the park, even for a domestique.

The first 30km show how massive the energy-saving effect of staying in the peloton can be. Haig was doing nearly 1.9w/kg less work, and 180w less in absolute power.

Of course, this difference was reduced as the race hit the mountains, where drafting plays less of a role. We broke down each climb and the pace and powers during the race to compare the two groups, and the two riders’ speeds on the climbs were very similar. Most climbs were done within just 30 seconds difference between the breakaway and the field, which was controlling its pace until the penultimate climb of the day.

As the peloton increased its pace, Jack Haig managed to climb 1min faster than Serge Pauwels over just 3.5km. At this point the Belgian had been dropped from the break, so he was not in the front as they passed over the brutal Col des Chevrères. Haig, on the other hand, was hanging on in the main group led by World Champion Alejandro Valverde. It is interesting to see that the two riders’ average efforts were quite similar (around .2 w/kg) despite their significant time difference on the main part of the climb.

As Jack’s main goal of the day was to make sure that his team leader was in position at the foot of the last climb of the day, he hit an impressive peak 2min power at the bottom of the final climb to La Planche des Belles Filles: 448w, 6.81w/kg. After this initial effort, The Australian’s job was done for the day and he rode a moderate pace to the finish, just 289w, 4.13w/kg.

Stage 6 was a massive early effort for GC contenders and their teams alike, and some race favorites came away licking their wounds. The fact that two first-time Tour riders took both the stage win and the yellow jersey is a testament to the brutality of this stage. Nearly a week in, this year’s Tour is still very much wide open.