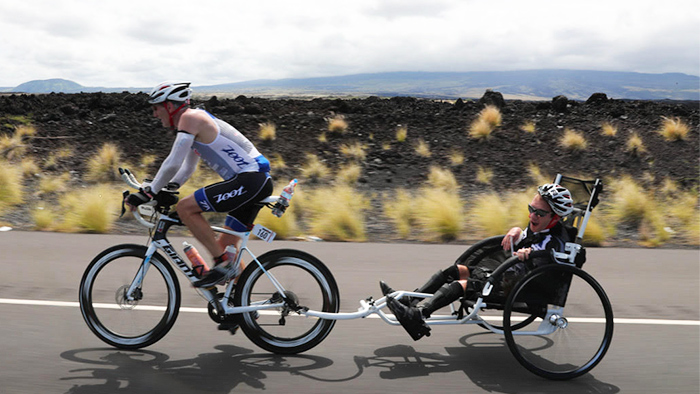 When Johnny and Jeff Agar missed the Kona bike cut-off in 2016, they resolved to come back more dialed-in and focused in 2017. Using Best Bike Split’s aerodynamic modeling they are well on their way to that finish line.

Triathletes across the country get together every year to watch the NBC IRONMAN World Championship broadcast. For many, it was this broadcast that first got them excited about the sport of triathlon.The stories told are compelling, inspiring, and at times even heartbreaking. In the 2016 edition one such story featured the Agar family. Johnny Agar was born with Cerebral Palsy, however, the very nature of his drive and determination meant that he would not be confined or limited in his athletic endeavors. With the help of his dad Jeff, Johnny’s athletic goals have continued to grow in both difficulty and inspirational impact.

Last year their collective efforts culminated at the 2016 IRONMAN World Championship where Team Agar attempted to complete the course under the 17-hour time limit. The race had all of the aspects of a great Kona broadcast story; it was incredibly compelling and inspiring, while also heartbreaking as their day ended when Team Agar got pulled off course after failing to make the bike cut off time.

Like most truly great athletes, when met with adversity, Johnny grew from this experience and drew motivation to once again attempt to toe the line at Kona. Though this time Team Agar is completely committed to preparing for the challenge. They knew that it wasn’t just one area that held them back; it was a combination of flawed race preparation, lack of focus—and most importantly a lack of deliberate planning toward their specific goal of completing the race in under 17 hours.

To help facilitate this renewed drive Team Agar brought on a coach and guitarist for the band Sugarland, Thad Beaty and his coaching partner Nicole Serraioicco. Beaty and Serraiocco not only have the right game plan, but were so moved by their mission that they enlisted a group of experts to help make sure this team crosses the finish line on October 15, 2017. Together they set out to gather industry leaders and as they put it “great minds of triathlon” to help wherever possible with the Team Agar Kona journey. Their partners include Wahoo, TrainerRoad, Zipp, Roka, Under Armour, Brooks Running, Adaptive Star, Advanced Elements, TrainingPeaks and Best Bike Split just to name a few. I was honored to be on these guys list and when they told me about their plans, I immediately offered any assistance that I could to help them reach their goal.

As the co-Founder and self-proclaimed “math nerd” behind Best Bike Split, I like to start with the numbers, and in Team Agar’s case there are a lot of numbers to consider. That being said, their ultimate goal is relatively straightforward. Jeff and Johnny need to make the bike cutoff time and do so with enough energy in the tank to run the 26.2 miles and cross the line before the fire dancers close out the night at 12 a.m. and the course is closed. Actually achieving that goal is anything but straightforward and I looked at it from a couple of angles. First I had to ask myself if it was humanly possible, and if so I had to discover what it would actually take to make it happen. To answer those questions I had to dig into the numbers.

I’ve found that to move forward it’s often beneficial to look back on past endeavors, assess strengths and weaknesses and determine where to focus future efforts. When we dissect the shortcomings of Team Agar’s 2016 Kona performance, the areas of focus become quite clear.

During their 2.6-mile swim, Jeff was pulling Johnny in a standard inflatable raft they weigh around 50 lbs. While he made the swim cut off time, the effort was much more strenuous than it should have been due not just to the vessel’s weight, but also to the raft being at the mercy of waves and the wind countering Jeff’s forward progress. The boats instability and lack a consistent forward glide path proved to be extremely metabolically expensive.

This year the Team has moved to a lighter (around 30 lbs lighter), more streamlined, hydrodynamic kayak design with a small keel allowing the boat to maintain a straight path less susceptible to forces outside of Jeff’s forward momentum.

His swim training has also taken a major leap forward. It wasn’t until Jeff started working with his new coaching team that for the first time he started to tools to build his swim specific muscular endurance such as  swim paddles, parachutes, banded ankles, and extensive dry land band work.

He also completed a 12 week neuromuscular re-patterning plan to develop and control the core musculature required to address his body position while harnessed to the watercraft. Thought the firing of swim specific core muscles such as the TVA and pelvic floor, Jeff has been able to reposition his body’s fulcrum point in the water, reducing his drag exposure significantly enough to shift his 100-yard base time from around 2:20 last year to 1:50 this year. This is around a 20 percent savings for the same effort.

Once out of the water, Jeff mounts his Giant road bike setup in a triathlon configuration while Johnny rides in a special Chariot attached like a bike trailer to the back. This is not an aerodynamic setup and it is most certainly not light or efficient, with a total weight of about 65 pounds for the bike plus the Chariot. When you add to that Jeff at 190 lbs and Johnny at 110 lbs, this means a total of 365 lbs must travel 112 miles with over 5,500 ft of elevation gain during the race! To put it in perspective a typical IRONMAN athlete plus their equipment will typically be well under 200 pounds total.

In our first meeting, Thad and Nicole asked me what would Jeff need to produce in terms of FTP (Functional Threshold Power) to make the Kona bike cut-off time at 5:30 pm, while still being fresh enough to finish the run before midnight. In 2016, Jeff’s estimated pre-Kona FTP at around 160 watts. Using the general rule of thumb that  67 to 70 percent of FTP (a bit under 125 watts in Jeff’s case) would be a comfortable IRONMAN power level, this would put his estimated bike leg finish time at well over nine hours. This is both well outside the bike time limit and doesn’t even account for any stops or issues on course.

To come up with the required FTP, I wanted to model out a worst case scenario in terms of a longer swim time, rough weather conditions, poor aerodynamic drag and accounting for multiple stops if needed. The target time number we came up with was seven hours and 40 minutes of ride time. Using Best Bike Split we were able to model out what type of power he would need to accomplish this, again using the general rule of thumb for IRONMAN power output to identify his target FTP goal.

Click on the image below to see this model in Best Bike Split:

As you can see in the image, to achieve a sub 7:40 ride time given worst case conditions meant Jeff would need to ride at around 175 Normalized Power which equates to an FTP of 260 watts at a .67 IF. With this information, Beaty and Serraiocco developed a plan in TrainingPeaks with a heavy dose of TrainerRoad indoor training to start increasing Jeff’s FTP as well as his endurance base. As of this article Jeff’s most recent FTP test has him at a solid 270 watts. While this gets his power into the right zone, to gain even more confidence the team will continue to push training to increase FTP.  This will give Jeff stronger legs heading into the run by reducing his TSS (Training Stress Score) on the bike leg without having to change the bike power plan average wattage.

The next step in the plan was to address Jeff and Johnny’s bike setup. If we model for the worst case scenario we want to make sure on race day a worst-case bike setup isn’t one of their obstacles. Johnny’s Chariot is getting an overhaul to make it lighter and more aerodynamic. The plan is to have it act as a cockpit of sorts, where he can watch his dad’s data and power numbers via a Wahoo Elemnt and relay instructions out on course using the integrated BBS race plans.

To reduce friction and aid in aerodynamics, Zipp has offered to help design new wheels. The team is also replacing their wheelchair-based technology with bike-based hubs. In addition, Jeff and Johnny have been training to keep their weight at optimal levels, saving those precious watts to make it to the run. Using the Time Analysis Tool on BBS we can show that every five pounds of saving on the setup well result in a time savings of three minutes on the Kona course.

The first test of the the team’s partially modified equipment and strategy was an overwhelming success. Following their BBS power plan, Team Agar cruised to a sub-four hour bike split and 7:40:13 at IRONMAN 70.3 Florida. Finishing under their goal time there was still a lot to learn from the race. The initial target was for a 170 watt average on the bike with a sub 180 watt Normalized Power target.

Because of the accelerations and decelerations associated with the pull of the Chariot, a Normalized Power of 170 resulted in an average power of of around 156 watts. Going into future races and training this effect (which will be amplified in the hills) will be taking into account for the modeling so we can adjust the planned targets accordingly. Given Jeff’s FTP progress the additional 10 to 15 watt stress should be absorbed well.

The other aspect we will be looking into more as Kona approaches is how the Team adapts to heat and humidity so we can build in the appropriate model impacts. We have been truly honored to help and continue supporting Team Agar throughout their amazing journey. We plan on being there as they easily make the bike cut off time, head out on the run (their strongest discipline), and as the cross they cherished line and hear the words, “Johnny and Jeff Agar you are an IRONMAN!”

To read more on Team Agar follow Johnny on twitter @agar_john  and check out their site Team Agar.

Try the free BBS demo here to find out how the Time Analysis Tool can help you dial in your aerodynamics and race-day speed.

About Ryan Cooper
Ryan Cooper is the Chief Scientist at TrainingPeaks and Co-founder of Best Bike Split. He has worked and consulted with multiple World, Olympic, and IRONMAN champions, as well as teams including UnitedHealth Care, Dimension Data, Cannondale Drapac, Orica Scott, BMC, Trek, and Sky. His main mission is spreading the metrics-based training approach of TrainingPeaks and the predictive race day analytics provided by Best Bike Split. Learn more at TrainingPeaks.com and BestBikeSplit.com.
#IRONMAN#TRIATHLON