The Fastest Age Group Woman in the World

To be the top female age group Ironman athlete takes time and commitment. So does being a medical student. Great Britain’s Catherine Faux has not only taken on, but excelled in both of these time- and energy-consuming activities. 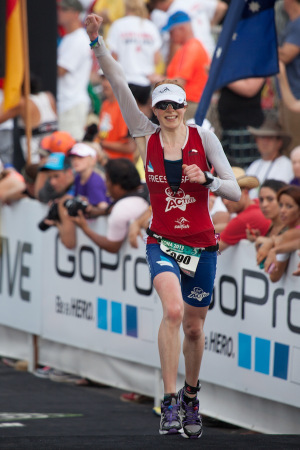 To be the top female age group Ironman athlete takes time and commitment. So does being a medical student. Great Britain’s Catherine Faux has not only taken on, but excelled in both of these time- and energy-consuming activities. In her second attempt at the IRONMAN World Championships this past month, she not only won the F25-29 age group but was the fastest female amateur. She also set a new age group course record and finished tenth woman overall, beating many seasoned pros. She’s accomplished all of this while attending the University of Sheffield in England studying medicine.

The familiar story of starting with a small triathlon and then getting hooked is true for Faux. “My first race was a sprint-distance triathlon close to where I live [about four years ago]. I distinctly remember thinking about what a huge advantage I had in T2 since I cycled in my running shoes so didn’t have to change!” From there, she quickly moved from tri newbie to a top female competitor. Two 70.3 events and her first marathon in 2010 were the next steps. 2011 saw her win the Outlaw Triathlon (a full iron distance event in Nottingham) by over an hour. She followed that up with another overall amateur win at the ETU Long Distance Triathlon Championships in Finland. 2012 was yet another step towards becoming an elite, and she moved to the 25-29 age group. At Ironman South Africa, Faux was again the top female amateur and seventh overall with a time of 10:26:42. This lead to her first trip to Kona, where she was second in the 25-29 age group in 9:53:53. She also defended her ETU Long Distance title with another overall victory that year. Faux continued winning in 2013 by taking the top female age group spot at Ironman France (had she been racing pro, she would have been the fourth pro female), and qualified for another trip to Kona.

Even with her remarkable initial success, Faux maintains a down to earth perspective on her triathlon career. “Up until my last race at Kona I have always explained away my success by thinking everyone else has just had a bad day, or a poor field turned up – I never feel like I’m doing anything unusual or special,” said Faux. “I dream, but dreaming is the very start of the process, like planting a tiny seed. I hadn’t much been watering it before, but now it’ll be nurtured over the next few years as I get through my time as a junior doctor before I can seriously consider going pro.” Whether she will turn pro or not Faux has not decided, first she needs to finish her schooling.

One point when Faux did combine training and schooling was last summer when she was an intern for Team SKY during their camp in Mallorca, Spain. Some riders found out about her athletic success and were quite surprised at her results. While she never asked for tips, she did learn from some of the top cyclists in the sport. “You learn a huge amount just observing high-level athletes – how they conduct themselves, and by seeing all of the support staff and the ways in which their intervention enhanced the training and performance of the riders,” said Faux. “There was a strong emphasis on getting the basics right. In the same way that an expensive bike is pointless if you’re not going to put in the training; the things like good sleep, good nutrition and really simple stuff like hand hygiene will all help you to recover, avoid illness and train and race better. It doesn’t have to be complicated.” 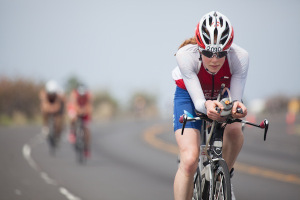 At home Faux works with her coach Judith Brand on TrainingPeaks to bounce around ideas and come up with the best possible plan for her. “I do listen to my body but I think if I didn’t have a coach I’d err on the side of doing too much rather than too little, since I’m sometimes unsettled when I hear about the vast volumes of training that some others do,” she said. She’s also learned to mix up the training paces and efforts. “Until I started with a coach I’d never varied the pace of any runs, doing each one at the same sort of speed.” She’s also added new sessions – like the hill repeats she started doing to prep for Ironman Nice. Faux realizes she has more to learn and leans on her coach not only to help her get faster but to collaboratively figure out what works best for her. “We’re kind of learning together and discuss a lot of the stuff she sets for me. I question everything because I like to know why I’m doing things rather than blindly following instructions.” Cat also gets support and mentoring from members of her team, Team Freespeed Virgin Active.

With her busy schedule of training, racing and studying; time management is a key. “I was busy with school, but once you find something you love somehow you manage to find ways to be less busy and be on your bike more and more,” says Faux. Rather than balance the studying and training concurrently, Faux likes to focus on one or the other. “I think in attempting to multitask you just compromise, so perform neither task well. I prefer to train hard and during the race season my study is minimal,” said Faux. “I have a good short-term memory, so now is the time, once the triathlon season has finished, [that] I need to get my head down and pass the next lot of exams, my finals.”

After such an amazing day in Kona there seems to be no limit to what lies ahead for this talented woman. Faux’s attitude continues to one of striving for the next level. “I got started [in triathlon] because I just thought it looked cool, and it presented such a challenge. I guess these are still reasons I love it– there are always so many ways to get faster.” Although her dreams have yet to be set, that won’t stop Faux. “A dream can be quite sustaining in the hard times, whatever it may be.”