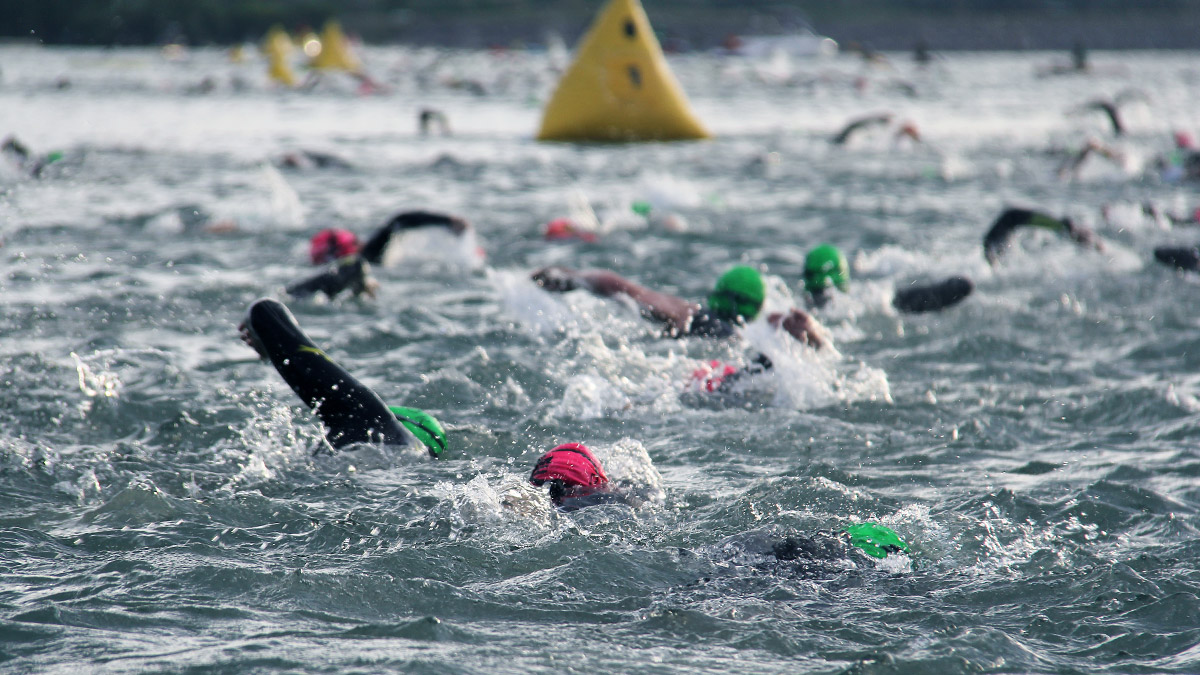 Swimming in open water can be stressful, but not if you’ve practiced these key skills. Find out how to sight, breathe, and swim straight no matter what.

It’s your first race of the year on a beautiful summer morning. All’s going well in the swim until you make the turn to head home. Then bam! The orientation of the lake is such that on a clear morning, the blinding sun is directly in your eyes!

For those athletes who didn’t consider this fact in their pre-swim planning, and are wearing clear goggles, the difficulty factor just hit the roof! Luckily, if you’re well-practiced in sighting your route, you won’t have to look up all that often to stay right on course for a fast swim.

Know If You Drift to the Right or Left

First off, nobody swims exactly straight all the time, so you’ll need to know your pattern before you figure the rest of this out. To find which way you tend to drift, try “blind swimming.”

First, try to get a lane to yourself. Push off easily from the wall, ensure you’re in the center of the lane, then close your eyes. Take a few strokes, then see where you are in relation to the center of the lane. Drifted a little to the right? Left? Do this a couple times, then wait a couple days and do it again. See if you’re consistently off to the same side; most of us are.

I drift to the right. So, when I’m blinded by the sun or big waves, I’ll just put a tiny bit of left correction every couple strokes (without looking up) because I know I have a pretty good chance of veering right. Then. after a couple more strokes I do look up, evaluate my position, and correct if needed.

Now, how do you sight? Let’s use the example that you want to do it with the right arm pull. Think fast and low, your googles just barely above the waterline in front of you. As you begin the right arm pull, instead of rotating your head to the right to breathe, you extend your neck forward, just for a fraction of a second now, as the pressure of your right hand against the water is sufficient to hold the head up.

Practice, practice, practice in the pool. Once you have it down, get your swim buddy and swim side by side sighting, say every 3rd or 4th stroke, to the other end. Once mastered, add a 3rd swimmer (that’s right, three in one lane simulating a part of your swim where you have a good bit of company) so that you get used to sighting in close quarters. If you wait till the end of a workout, when people are a little tired and giddy, it can be great fun.

I work the pier in Kona every year, and on Friday afternoon I help out by running athlete bike check. After each racer has racked his/her bike, we take them on a quick tour of the starting area and transition zone so it’s not foreign to them race morning when it’s dark.

I always tell my “students” that the start will be a washing machine with arms and legs everywhere, and they will most likely not be able to see the first few buoys marking the swim course. But if they sight on the red-roofed hotel I point out to them just beyond the turn-around, they won’t need to see the buoys and they’ll swim straight and fast. In your sighting, pick an object far enough in the distance that it is easy to see when you only have your head out of the water for a split second.

How frequently you need to look up will vary. There are times in open water when you’re in a group, and times when you’re virtually alone. In the former you may get jostled or sucked off your line by a nearby swimmer, so sighting frequently (as often as every left arm stroke) may be needed short term. But when there’s little outside influence on your direction, you can sight much less often. Remember, when your head is raised, your hips go down, killing off some of your forward momentum, so use your siting wisely!

Let’s say you never learned to bilateral breathe. It’s time. Really. Say the wind and waves are lapping up from the right. No biggie, just breathe mostly to the left—assuming you can. If you can’t, it’s time to practice!

Each time you go to the pool, from now on, take part of your warm-up and breathe to the “other” side. It’ll be really awkward at first, but you’ll pick it up quickly and make yourself just that much more comfortable and competent in the water.

Once again, practice, practice so it’s just second nature on race day.  And the finish line will be a sight for sore eyes. Good luck!

About John Post, MD
Dr. Post has a long history with triathlon including 6 Kona finishes and an Orthopedic Surgery practice in Virginia caring for, among others, injured triathletes. He now enjoys giving back to the sport by being a World Championship Transitions volunteer every October. If you find yourself on the pier in Kona, please stop and say hi to “the man in the red hat.”
#TRIATHLON