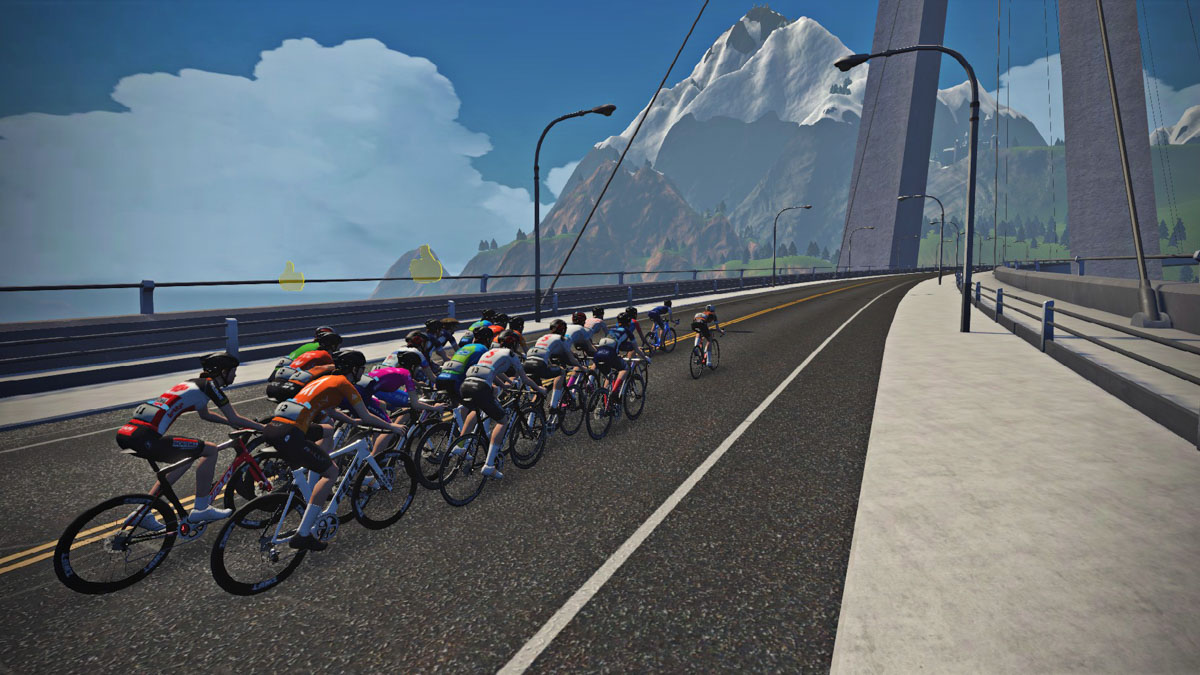 The first ever virtual Tour is off to an exciting start. Find out how the action played out for Trek-Segafredo’s Julien Bernard in Stage 2.

Stage 2 of the Virtual Tour de France was run on the demanding Watopia Mountain course, which is dominated by the Epic KOM and the brutal Radio Tower climb. This was to be the first real test for the climbers competing in the Virtual TDF after a flatter Stage 1.

Julien Bernard proved on today’s stage that his time during lockdown was well spent, powering his way to an impressive victory on a demanding circuit against a high-caliber peloton. Julien has proved his talent for climbing and GC riding in the real world over the past five years, but today his victory came from a 14-rider group sprint, narrowly beating Freddy Ovett of Israel Start-Up Nation on the finish line. We analyzed his Training Peaks file to break down the key areas of the stage, and give us some insight into the current fitness level of many World Tour riders prior to real-world racing in August.

It is tradition that many of the community races within Zwift start full gas, but this was not the case among the Pro peloton, which had a more controlled opening kilometers as the looming Epic KOM played on everyone’s mind. In the opening 4.6km from the start to the foot of the climb, Julien had an average power 325w, 5.33w/kg. This might be a big effort for a regular rider, but for a pro it meant energy conserved ahead of the battle on the long 11km climb.

The Epic KOM can be broken down into several sections. The opening 6.4km is a consistent climb, averaging 5 percent, with pitches up to 8 percent and generally never dropping below 3 percent. Once this initial crest is done, the climb dips and rises for a number of kilometres before it passes the official top of the Epic KOM banner. Past this banner is the real sting in the tail: the left turn onto the Radio Tower climb, which cranks up to 13 percent.

The first 3km of Epic Climb was done in 6min at a very constant power of 360w, 5.90w/kg for Julien. The Peloton was well compacted during this opening section with many of the pre-race favourites sitting comfortably near the front of the peloton. This climb is also one of the most draftable climbs within Zwift so those riders who are more familiar with the gaming aspect would have enjoyed the benefit of drafting knowledge, as well as when and where to place the power down.

It was just as the peloton reached the first village on the climb (after 3km) that the first big pace change came, thanks to a surge from Geraint Thomas of Team Ineos. It was this surge that put an end to Mathieu van der Poel of ProTeam Alpecin–Fenix, who lost contact and never made it back. Julien had a 40sec effort of 412w, 6.75w/kg to hold onto the group as Geraint splintered the peloton, then it was back to a tempo of 5.8-6w/kg. Geraint Thomas put the hurt on once again as they headed towards the top of the Epic KOM, and on this effort Julien did 398w, 6.52w/kg for 30sec. The next to attack was Michael Woods of EF Pro Cycling, who launched a hard effort as the peloton rode through the tunnel section on the climb. Again Julien had to dig deep to hold the wheel, with 506w, 8.3w/kg for 13sec. It was during this surge that he hit his peak power on the Epic climb: 582w, 9.54w/kg.

The attack from Woods was ultimately brought back, and a fragmented peloton of around 30 riders got a short reprieve on the roller coaster terrain approaching the Radio Tower. Julien did this 3.4km section at an average power of 344w, 5.64w/kg, no doubt a welcome break after averaging 369w, 6.05w/kg for 12:42min.

The Steep slopes of the ‘Radio Tower’ climb were to be the main showdown after a solid 12min of climbing. Hitting gradients of 15% and an average of 13% over the 1.04km, this was the time for riders to push the limits on their watts per kilo ratios.

The bottom of the Radio Tower saw a massive effort by Mike Woods of EF Pro Cycling, who forged ahead with a few others and made some big efforts of 8w/kg to gain over 10 seconds on Julien and the 10 other riders remaining in the peloton. Julien nonetheless maintained a very consistent effort on this climb, averaging  433w, 7.1w/kg and hitting a peak HR of 193bpm. This would have been a real maximal aerobic capacity effort for Julien and the others—hitting peak aerobic capacity after doing approximately 12min at 6w/kg requires a huge aerobic engine. This is the real stand out difference between the World Tour Professionals and the rest of the cycling world.

The Fight for the Finish

As Julien and the others crested the top of the Radio Tower, they were 10-12 sec behind a select group of 4 riders who had forged ahead on the steep climb. On the long descent, the momentum generated by the larger group enabled them to regain contact with the leaders. With under 7km to go to the finish line, things were looking more and more likely to finish in a group sprint.

Julien was perhaps one of the remaining riders who was not keen to see a large group finish, as he was the first to try and split the group on some of the rolling climbs as they headed towards the line. With just 5km to go Julien attacked hard, and momentarily went clear with Guillaume Martin as he with a 15sec effort averaging 646w, 10.6w/kg, and hitting a max of Max 755w, 12.38w/kg. Unfortunately, this was not enough to get clear, and it was at this point that the reality of a small bunch sprint was inevitable.

As they came approached the final 2km, it was left to Tao Geoghegan Hart of Team Ineos to try and make a try for a solo victory. Julien again had to hit into his anaerobic reserves, going up to 681w, 11.16w/kg to maintain position near the front of the peloton and rein in Tao’s attack. As Julien was no doubt aware, all these small anaerobic bursts were constantly eating into his already-depleted reserves, which he would need for the final big push to the line.

The sprint for the line started very early, as Pat Bevin of CCC Team went on a flyer with 500m to go. This meant a long, drawn-out sprint. Pat was passed first by Freddy Ovett Israel Start-Up Nation with 150m to go, and it seemed that Freddy had it tied up for the victory, but he faded at the end, and a consistent effort by Julien just took the victory in the final 50m.

In the last 400m Julien did an impressive 864w, 14.2w/kg for 20sec, with his peak 10sec at the start of his sprint as the group jumped to chase Pat Bevin. In this first 10sec of his sprint, Julien did a massive 1000w avg, or 16.4w/kg, with a peak power of 1095w, 17.95w/kg. Along with everyone else approaching the line, his power gradually declined—still, in the last five seconds of the sprint Julien averaged 837w, 13.7w/kg, allowing him to take a storming victory. The effort was easily seen on the data as Julien hit an eyewatering peak HR of 199bpm during the sprint.

The opening weekend of the Virtual TDF was an exciting start to the first ever online TDF event, and we look forward to the coming weekends, when riders will tackle new and more-demanding courses in the battle for a virtual Yellow Jersey.