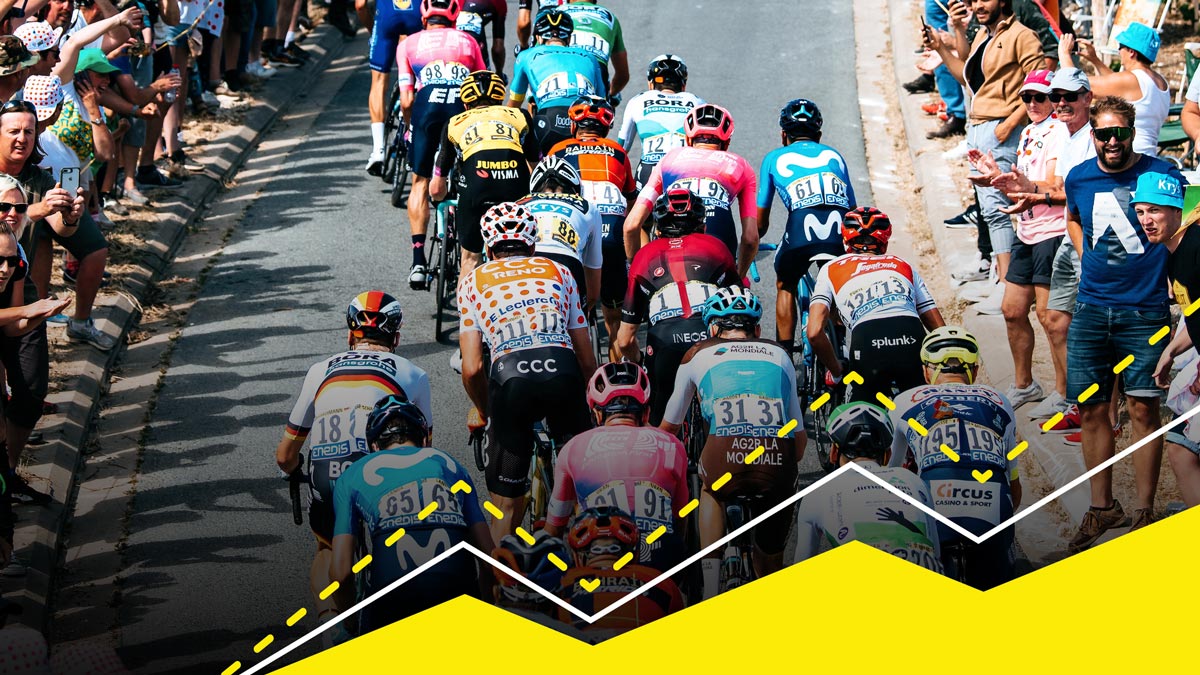 Stage 3 of the Tour de France was the first stage to enter French soil. As predicted, it was an exciting stage with lots of short climbs in the last 40km and time bonuses up for contention. Julian Alaphilippe ultimately took the fight to everyone in the peloton with an impressive attack and solo break in the last 15km to take a solo stage win, and the overall lead. Here we’ll look at a file from EF Education First rider Michael Woods, who finished with the pack in 20th.

Overall Stats for the stage:

Michael Woods is taking on his first TDF as one of the key team riders to help teammates Rigoberto Uran and Tejay Van Garderen fight for a high GC result. But today proved that Michael himself is one of the strongest within the race, especially on the short punchy climbs that greeted the peloton at the end of Stage 3.

As common practice within the opening week of a Grand Tour, the first break of the day was formed early in the stage. Composed of riders posing no major threat to the overall classification, this break was allowed a maximal advantage (more than 6 minutes) over the Jumbo-Visma led peloton.

Of course, the ‘relaxed’ pace couldn’t continue forever. With the final climbs looming in the last 50km and the wind being a potential factor on the exposed and open roads of Northern France, the tension within the peloton soon started to become apparent.

Deceuninck-QuickStep began to assist with the pace-setting at the front of the peloton, reducing time to the break to 1’45’’ with 60km to go. As the riders approached the first categorized climb, we can clearly see the jostle for a good position at the head of the peloton (and out of harm’s way) in the increase in effort. In the 20km leading into the first climb, Michael had a normalized power of 266w, 4.43w/kg for 26:31min, with an average speed of 45.1kph. It was also on here that Michael hit a lighting-fast 90.3kph.

The first climb of the day topped out with 43km to go. It was on the lower slopes of the Côte de Nanteuil-la-Forêt that Tim Wellens of Lotto Soudal left his fellow escapees for a solo attempt on the stage win. But the tempo within the peloton was being set by Bora-Hansgrohe, Jumbo-Visma and Deceuninck-QuickStep, so it was always going to be a tall ask to stay away.

The first climb of the day was the first real increase in pace and this effort and intensity was going to keep getting higher as they headed towards the finish.

First 10sec of the climb taken at very high pace: 536w, 8.93w/kg, as the riders kicked hard into the lower slopes of the hill.

The pace remained high in the rolling terrain between the first climb of the day and the second climb of the day. With an average speed of 58.1kph for the 11.2km it is clear to see that the peloton was not going to allow lone escapee Tim Wellens any freedom.

The next climb of the day was a short, steep push on narrow roads, which just heightened the tension within the peloton. With the EF Education First Team well positioned to the fore, we can see that Michael and his team were ready for a fight on the stage, and successfully keeping GC leaders out of harm’s way. Unfortunately for the team, Alberto Bettiol (Ita) had a puncture in the last 20km and lost his chance for a high placing.

With four climbs remaining and a hard uphill to the finish line, there was lots of aggressive racing still to be done. The paced increased again on the Côte d’Hautvillers climb with a hard tempo now being set by Team Astana.

The first 10sec of the climb was again the hardest part with Michael logging 611w, 10.2w/kg on the lower slopes.

Between the fatigue and the technical roads preventing much change in position, many riders started to lose contact with the main peloton at this point. The distance between Côte d’Hautvillers and Cat Côte de Champillon was only 2.4km, but even this proved too much for many, and the peloton dwindled to 50-60 riders.

Luckily, Michael’s ability on the short and explosive climbs kept him comfortable and towards the head of affairs through this section.

This climb was done at a lower intensity and with a more constant effort, but it was almost double in length to the previous two. Still, Michael was able to maintain good position and prepare for the final 15km.

With the peloton approaching the final climb of the day, Côte de Mutigny, the stage was set for an explosive finish. Tim Wellens held a slender lead over the chasing bunch, which now contained just 50 riders. With time bonuses on the line, teams had even more reason to bring back the lone leader.

A hard pace was set at the bottom of the climb by Astana, providing a perfect launch pad for eventual stage winner Julian Alaphilippe. Julian was to make his move in the final 400m of the climb, exploding out of the peloton at a pace nobody could follow. Riders from the bunch desperately started to go clear as they approached the top of the climb, all attempting to bring Julian back. Principal of these riders and third over the top of the final categorized climb of the day was Michael Woods, proving he was one of the strongest on the day and in top condition.

The intensity of this climb and the pace of Alaphilippe’s attack is reflected in Michael’s data from the climb. In the opening 30 seconds he produced 626w, 10.43w/kg, to match the high pace set by Astana. And in the final 30 seconds of the climb, as Michael tried to pace across the gap to Alaphilippe, he averaged 546w, 9.1wkg. For the complete climb Michael set a blistering massive average power of 498w, 8.3w/kg for over 2 ½ min.

Unsurprisingly, Mutigny turned out to be the hardest climb of the day and one of the fastest of the whole season so far: for Michael this was a world-class performance. But the day wasn’t over yet.

The pace set by Michael Woods allowed four riders to escape the peloton in pursuit of the flying Alaphilippe. Once they got down off a fast descent, this leading quartet rode together before eventually being caught with 10km to go. In the 3.86km during which the four riders worked to close the gap on Alaphilippe, Michael averaged 280w, 4.66w/kg, and 50.5kph.

The 10km approach to the finish was not an easy affair, with the uncategorized but punchy Côte du Mont Bernon (930meters at 5%) and the final climb to the line to contend with. The leaders dispatched the former in 1:54 minutes, with Michael averaging 385w, 6.42w/kg and a max power of 694w, 11.56w/kg.

The pace remained very high as the bunch hit the final climb which was to lead them to the finish. With Julian set to win the stage, now it was about the peloton reducing the gap, and setting up riders to fight out for the bonus seconds available for 2nd and 3rd place on the line. Unfortunately, Michael found himself on the wrong side of a small split in what was left of the peloton, allowing 11 riders to get a small-time advantage over him and others within the peloton.

The sprint for the line was a hard 250 meters on gradients of 11%. Here Michael produced his peak 30sec power for the day—amazingly—after 4 ½ hours of intensive racing. This was an impressive effort which not only earned him 11th place in the GC, but proved his good condition and potential for some big results in the coming weeks.