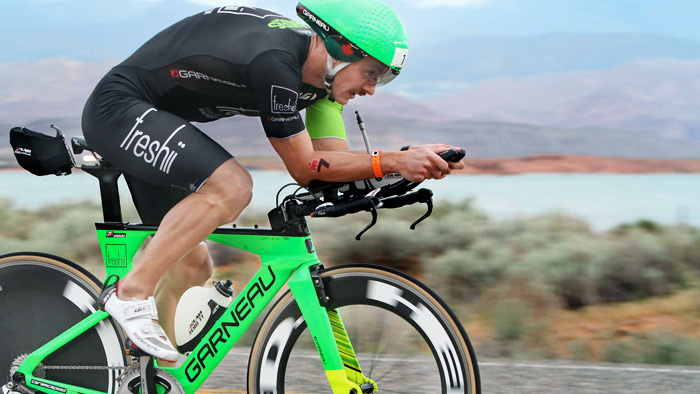 Lionel Sanders has started of his 2016 season with four straight IRONMAN 70.3 victories. His latest victory at the 2016 IRONMAN 70.3 North American Pro Championships in St. George, Utah was perhaps his most impressive as he bested a strong field of contenders, taking the win by almost three minutes.

Sanders exited the water four and a half minutes back of the leaders and proceeded to ride his way to the front. Not panicking, Sanders approach to the bike course was to ride steady early on and be prepared for the harder sections that come later in the bike course. “I tried to be patient for most of the day,” he commented after the race. Still, Sanders was riding through the field and catching everyone, including bike powerhouse and 2014 IRONMAN World Champion Sebastian Kienle.

In his preparation, Sanders had trained specifically for the main climb of the course- Snow Canyon. “I knew around 1:40 in there would be about a six mile climb through Snow Canyon, so I prepared for that in the weeks leading into the race by doing a lot of stuff out of the saddle on the CompuTrainer,” he commented. His preparation paid off and he was able to push the pace on Snow Canyon. “By this point I was in the lead, but I felt good so decided to get out of the saddle for most of this climb and see if I could get a gap on the field.”

After the climb and with a mostly downhill ride to the finish, Sanders again made a smart decision. “Once to the top of the canyon it is a pretty steep downhill, and I am not the greatest at holding high cadence, so I eased off a bit and tried to get some nutrition in,” he said. Sanders rode a 2:03:57, the fastest bike split of the day, to come off the bike in the lead.

The hills that make up the bike course continue to challenge athletes on the run course as well. “The run is very challenging. The first three miles are all up hill. It was mentally very taxing,” recalls Sanders. In addition, Sanders felt pressure from German Sebastien Kienle. “He [Kienle] was only 30 seconds down for nearly the first 10 miles. I was running scared the whole time. I tried my best to keep the pedal to the medal but I couldn’t shake him,” Sanders said. The constant pressure meant that Sanders never really let up, and his file shows that. His average pace is only 4 seconds faster than his NGP, showing a consistent pace no matter the grade.

Near the end, Sanders started to pull away but never really slowed his pace. “It wasn’t until mile ten or so that the 30 seconds grew to about a minute,” remembers Sanders. “I was still scared that he would find another gear, or that suddenly I would blow up, so I continued to push the pace. Even at mile 12.5 I was still running scared, as looking back I could never get a good perspective on how far back he was.”

Illustrating this is the fact that Sanders ran a 5:24 per mile pace over the final 2.5 miles. Sanders posted the fastest run split of the day, clocking a blazing 1:13:30 run and taking the win to become the 2016 IRONMAN 70.3 North American Champion.

While it may look like Sanders hammered the bike, the truth is that he paced it within his abilities. This is not only evidenced by the bike numbers, but also by the fact that he got off the bike and had the fastest run of the day. This points out that every athlete, especially the professionals, rely on smart bike pacing to leave enough in the tank for a solid run.

About AJ Johnson
AJ Johnson is the Content Editor and Power Analyst for TrainingPeaks. He is also a USA Triathlon and USA Cycling certified coach. A jack of all trades in endurance sports, he has raced everything from IRONMAN and marathons to road, mountain, and track cycling. A former freelance writer and editor of TRI and ROAD Magazines, when not editing or writing he spends his time with his family or out on long rides to think of more great content for TrainingPeaks readers.
Visit AJ Johnson's Coach Profile
#DATA-ANALYSIS#IRONMAN-70-3#PERFORMANCE