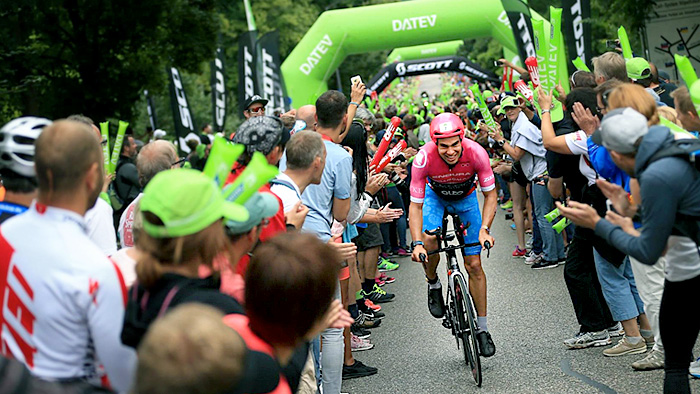 British triathlete Joe Skipper placed second behind Germany’s Jan Frodeno, who set a new Iron distance World Record at the 2016 DATEV Challenge Roth. For Skipper, it was a day of pushing himself, racing smart, and believing in his fitness. View his bike and run data to see how he paced the race perfectly for a great result.

British triathlete Joe Skipper first gained recognition at 2015 IRONMAN Texas, where he biked an amazing 4:10 and ran a 3:04 marathon in blazing hot conditions on his way to a second place finish. At the DATEV Challenge Roth, Skipper once again showed his ability to put together a full race and make it to the podium. Before the race, his goals were to reach the podium, go under eight hours, and set the British Iron distance record. All lofty goals, but Skipper was confident in his abilities.

Out of the water in 27th place, Skipper did not panic but he did push the pace on bike. “I pushed the bike harder then normal as I wanted to get the British record and go under eight hours,” he said. After catching a group of riders, Skipper put in an effort to leave them behind. “I caught a group around 60 kilometres in and I didn’t want to tow them along for the remainder of the bike,” said Skipper. “I wanted to make sure I hit it hard so they couldn’t save energy behind me. I wanted to have a chance of a podium and having them with me would not have been good.” This shows the slightly different tactics of the professionals. Skipper knew that allowing other athletes to sit in his wake would only hurt his chances of making the podium.

Skipper continually kept his effort high, knowing that if he wanted to reach his goals he would have to push himself. “I pushed he bike harder then normal as I wanted to get the British record and go under eight hours. I was a bit slower then what I wanted to be in the swim and my speed was lower then what I was hoping to average, so I kept pushing in order to make a sub eight hour time a possibility.” His Intensity Factor® (IF®) was .88, meaning he rode at 88 percent of his Functional Threshold Power (FTP). Typically, a top Ironman professional male has an IF of .80, so the data shows how much Skipper really pushed his limits.

Skipper believes it was the nature of the course that caused him to be slower than he had anticipated. “I think people underestimate how hard the Roth course is especially when you are riding solo on it,” he commented. “There’s 1500 meters of climbing and the wind picked up in the second lap. The road surface is perfect but it’s certainly not the quickest bike course I’ve done by any stretch.”

Even though he was pushing his effort, Skipper kept his output smooth. His Variability Index (VI) was 1.03, well under the 1.05 that is the recommended as the limit for a long course triathlon. By keeping his effort smooth, Skipper used his effort in the most efficient way.

Off the bike, Skipper set out to run his way to his goals. He was in seventh place and needed to run under 2:42 for a sub-eight hour finish. It was a tall order, and initially, Skipper had his doubts. “I felt tired at the end of the bike and didn’t really know how I was going to be able to make it through the marathon,” he recalled. “I wasn’t looking forward to it.”

Rather than dwell on how he felt, Skipper decided to do the simple thing and run as fast as he could. “At the time I didn’t know I had to run a 2:42 marathon as I didn’t want to look at my watch,” he said. “I just new I had to run fast so decided to just try and hold 6 minute miles for as long as possible.” This strategy worked as Skipper averaged 6:10 per mile pace, setting the fastest run time of the day with a 2:38 marathon and bringing him to the second step on the podium. 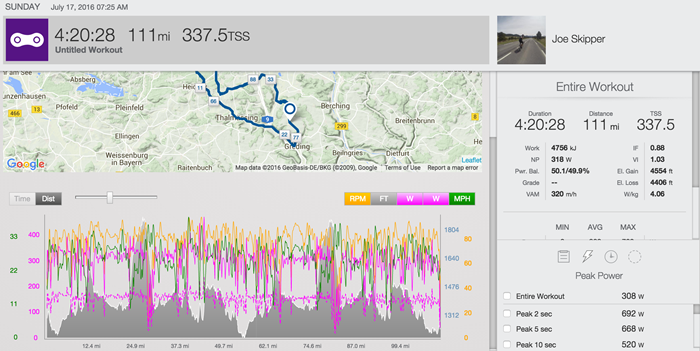 Joe Skipper came to the DATEV Challenge Roth with three lofty goals. With smart decisions, pushing efficiently, and plenty of hard work, he was able to accomplish all he wanted.

About AJ Johnson
AJ Johnson is the Content Editor and Power Analyst for TrainingPeaks. He is also a USA Triathlon and USA Cycling certified coach. A jack of all trades in endurance sports, he has raced everything from IRONMAN and marathons to road, mountain, and track cycling. A former freelance writer and editor of TRI and ROAD Magazines, when not editing or writing he spends his time with his family or out on long rides to think of more great content for TrainingPeaks readers.
Visit AJ Johnson's Coach Profile
#DATA-ANALYSIS#PERFORMANCE#TRIATHLON