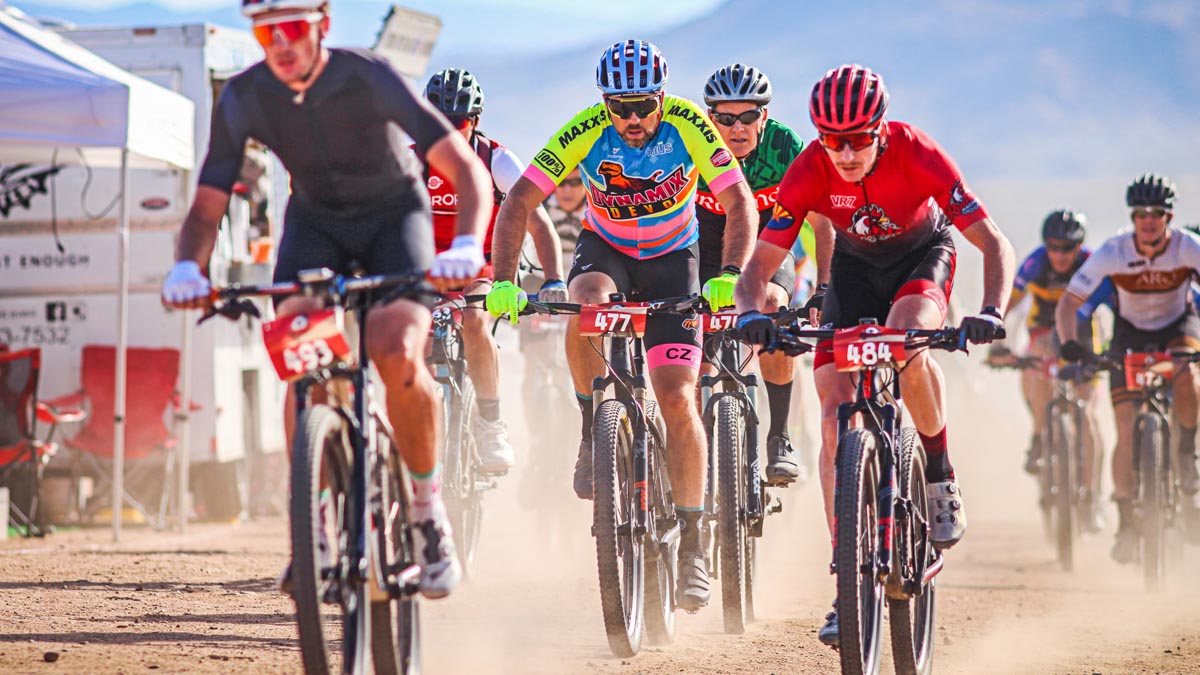 It’s impossible — and foolhardy — to win every cycling race you sign up for. But by prioritizing races, you can use your B and C races to prepare for your A race.

Whether it’s a group ride, a local crit, or the National Championships, cyclists always want to win. But as you rise through the ranks, the gap between first and last begins to narrow. In order to compete with the best, you need to work through peaks and valleys of fitness throughout your season, balancing racing and training along the way1. A carefully planned race calendar can be a huge advantage for cyclists, amateurs and professionals alike. This article will explain how you can use B and C races to prepare for your A race.

Most cyclists will focus on one to three A races per year. These races are the most important of the season — ones that you have been thinking about for months. A races have a big red circle around them on your calendar, and you will probably take time off of work, travel halfway across the country, and bring your very best race gear for this level of event.

A races are typically the biggest events of the year such as the National Championships, Tour of America’s Dairyland for Crit racers, or the Redlands Bicycle Classic for road racers. Almost every rider will arrive on the start line in top condition, and so it is paramount that you arrive ready to compete. You don’t want to be tossing and turning the night before an A race, or mounting new tires two hours before the start. Everything should be dialed in so that you can focus on getting the very best out of yourself in the race, both physically and mentally.

B races are middle-of-the-road races that aren’t the most important races of the season. These races are typically regional events such as the State Championships, a popular weekend omnium, or a prestigious crit such as Athens Twilight or Mass Ave. Not every rider in these races will be in peak condition, but most will arrive with a high level of fitness. These events are typically near the middle of the road racing season, with the National Championships following a few weeks after. This means that many of the top riders will still be a few weeks away from their peak condition.

B races are often a dress rehearsal for the A race a few weeks out. Riders can dial in their pre-race routine, test out equipment, and practice tactics in a high-level race with high-quality competition. B races also serve as an important fitness benchmark as well as an opportunity to pinpoint any weakness that can still be improved upon before the day of reckoning (i.e., the A race).

Lastly, C races are simply practice races that can be used as training, with the final result meaning almost nothing to the rider. C races can be local crits, Tuesday night at the velodrome, or a weekly time trial. These are low-priority races where riders show up in all sorts of shape; some are nearing their peak, while others haven’t ridden in five days, while some will try attacking from the gun, just for fun. The purpose of C races is to try new things, get a hard workout, and have fun!

B and C races can also help boost your motivation throughout the racing season. Endurance sport, as we all know, can be extremely tough, lonely, and grueling. The constant grind of training can wear on us mentally, and a lack of racing can take an even bigger toll (as many of us have experienced over the last 18 months). B and C races serve as stepping stones for athletes on their way to their A race.

Before we start applying B and C races to your training plan, we have to first understand “peaking”: what is it, and how can you achieve it?

Peaking occurs when you’re as prepared as possible, both mentally and physically, for your event. It’s when your body is firing on all cylinders, when your mind and body move as one, your legs feel like they could pedal forever, and you’re as focused as the Dali Lama mid-meditation. It’s a feeling like no other, and one that can only be achieved a couple of times per year. Athletes can set power PRs during their physical peak, and do things on the bike that they never thought possible.

In order to achieve your physical peak, you must strike a careful balance between fitness and freshness that puts you in the best possible condition to perform. Hitting a true physical peak can only be done 2-3 times per year, with at least 12 weeks in between each peak. This is why peaking is essential for your A race, but is impractical for your B and C races. Check out this TrainingPeaks blog by Stephen Gallagher for more details on how to achieve multiple peaks throughout your season.

There are many ways that B and C races can be used to train for A races. First, they can be used as physical training. C races, for example, can take the place of a high-intensity interval session. While you lose out on high-quality intervals, you will gain pack racing experience, bike handling skills, tactical awareness, and unstructured intervals that involve sprinting, cornering, threshold and VO2 max efforts, breakaways, and climbs.

Research has also shown that we can push ourselves harder in the presence of other competitors2, making B and C races an opportunity to push ourselves further than we ever could in a solo training session.

B races can also help boost our confidence before our A race. When you enter a B race, you should always have one or more goals that directly relate to your upcoming A race. If your A race is a 40K TT, for example, your B race goal should be to ride a negative split (i.e., going faster in the second half of the TT compared to the first). If your A and B races are both criteriums, then one of your goals should be sitting third wheel with 250 m to go, putting you in the ideal place to launch your sprint.

B and C Races are an Opportunity to Experiment

“Never try anything new on race day,” is another cliché that certainly rings true, but only for A races. B and C races are the perfect opportunity to try new things, such as equipment, nutrition, warm-up protocol, and more. Especially in a C race, it’s not the end of the world if your new energy bar makes your stomach turn upside down — now you know what doesn’t work for you.

Here are a few things to try out in B and C races:

You never know what crazy idea might turn out to be the ‘magic sauce’ for you. I remember the first time I tried racing a crit with 80psi in my tires. I had never raced below 100psi before, but I felt the difference in the very first corner — and loved it.

Falling Into the Competitive Trap

Riders often fall into the trap of prioritizing too many races throughout their season. They’ll pull up a race calendar in November, and begin marking “A”, “B”, or “C” next to each race. When they get to the end of the list, they tally up their numbers, and they see that they circled 5 A races, 12 B races, and 3 C races.

It’s an easy trap to fall into. As competitive athletes, we are driven to win, and the idea of ‘giving up’ on our results at a B or C race feels counterintuitive. We want to win everything! But not only is seeking to win every race unrealistic, but it will also leave you bitterly disappointed. The practice of chasing “peak fitness” for three months at a time has driven many cyclists into overtraining and burnout3.

If you manage to maintain “peak fitness” for three months straight, the reality is that you actually aren’t at your peak fitness. In order to physically peak in endurance sports, cyclists need to work in macro, meso, and micro cycles, balancing tough training and proper rest to truly achieve their physical peak. The old adage holds true: sometimes you have to take one step back in order to move two steps forward.

How a Coach Can Help You Plan Your Racing Season

A coach will give you an outsider’s perspective on your training, fitness, and goals, and help you achieve the perfect peak for your A race. Below is an example 4-week block from the training plan“12wk Road Race Preparation Plan w/Peak – ZNehr Coaching”. Here, I use the athlete’s B race to help them peak for their A race three weeks later. Throughout the plan, rest is balanced with hard training and interval sessions that target the specific demands of the upcoming A race.

If you’re aiming to peak for a different event, here are a few example training plans to help you peak for a Fondo or a criterium:

In the end, peaking is both an art and a science. A coach can certainly help you along the way, but ultimately it is up to you to decide which races are most important to you. Prioritizing your race calendar is one of the most under-utilized tools in cycling, as it can help you stress less, perform better, and achieve your very best when it matters most.

1. Henderson, Zachariah. (2016). Peaking and Tapering in Endurance Athletes: A Review. The Post. 1. 1-29. https://www.researchgate.net/publication/304675571_Peaking_and_Tapering_in_Endurance_Athletes_A_Review

About Zach Nehr
Zach Nehr is a USA Cycling-certified coach at Wenzel Coaching, and a Cat 1 cyclist riding for the Project Echelon Racing Team in 2019. He studied Exercise Science and Psychology at Marian University, graduating with a Bachelor’s Degree in Exercise Science in 2018. During his time at Marian, Zach won 6 Collegiate Team National Championships in Road and Cyclocross, as well as an individual championship in the Varsity Time Trial in 2017. Zach – a native of Milwaukee, Wisconsin – currently resides in Tucson, Arizona where he splits his time between training, writing, and coaching.
Visit Zach Nehr's Coach Profile