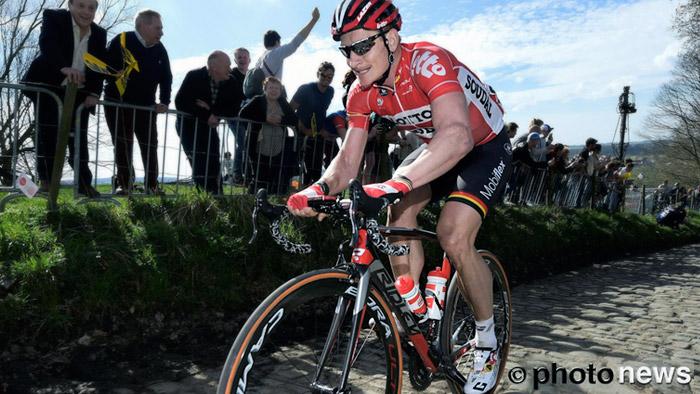 Team Lotto Soudal rider Andre Greipel is known for his amazingly fast sprint. However, he is also a strong classics rider and has animated the last two editions of the Tour of Flanders. Check out the amazing numbers this powerful rider put out over the 2016 Tour of Flanders held over 255 kilometers of punishing cobblestone roads.

Andre Greipel and his Lotto Soudal teammates took on the 100th edition of the Tour of Flanders last Sunday. Greipel was one of the main riders of the day, bridging up to the breakaway and then leading the race on to the famous Oude Kwaremont. See the power he had to produce to tackle this monument of a race.

At the 155km mark Greipel jumps from the peloton with an and set off to catch the two leaders. His initial jump of 1248W is enough to get a gap to break from the peloton and go off in pursuit of the two men up the road.

During his pursuit of the leaders, Greipel sets his Peak 20 minute power of 391W while averaging 40.7kph.

With the peloton quickly closing in, at the 207k mark, Greipel jumps from the group to lead everyone onto the famous Koppenberg. Climbing up the Koppenberg he averages 501W, or 6.03W/kg for 2:22 at 68 rpm.

On the second ascent of the Oude Kwaremont, Greipel still puts out 398W, or 4.80W/kg at 80rpm. Interestingly, his peak wattage is higher than his first ascent, hitting 876W.

For a final perspective of how hard this race was and how much effort Greipel put into it, his Intensity Factor® (IF®) was .89, meaning he rode at 89 percent of his 1 hour max for over 6 hours!

About AJ Johnson
AJ Johnson is the Content Editor and Power Analyst for TrainingPeaks. He is also a USA Triathlon and USA Cycling certified coach. A jack of all trades in endurance sports, he has raced everything from IRONMAN and marathons to road, mountain, and track cycling. A former freelance writer and editor of TRI and ROAD Magazines, when not editing or writing he spends his time with his family or out on long rides to think of more great content for TrainingPeaks readers.
Visit AJ Johnson's Coach Profile
#CYCLING#DATA-ANALYSIS#PERFORMANCE