The Tour de France pushes riders to their limits for three weeks. From fast flat stages to punishing mountain top finishes, no stage allows the riders to relax. We take a look at some of the power numbers produced by the pros. 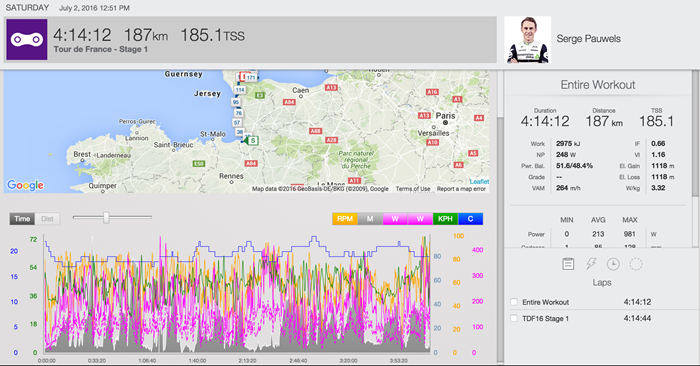 Comments on the stage from Pauwels:

Stage 2 starts in Saint-Lo and travels west towards the coast. While primarily a flat day, riders will tackle three category 4 climbs before reaching the eastern coast. Turning north the course actually follows a brief section of Stage 1’s course through Lessay. However, where Stage 1’s course turned inland, Stage 2 will continue up the coast then wrap inland towards the northern coast at Equeurdreville-Hainneville. The big test of the day will be the category 3 climb Cote de La Glacerie to the finish at Cherbourg-en-Cotentin. This climb ascends 169 meters over 3 km with a very steep section around 181-181.5 km. 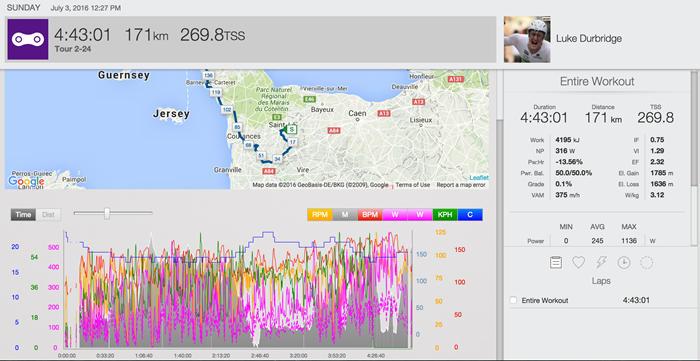 The second longest stage of this year’s tour starts in Granville, a town riders passed through on the way up the coast during Stage 1. The course travels inland to the east for about 25km before turning south and heading to the only categorized (cat 4) climb of the day up Cote de Villedieu les-Poeles. The remainder of the course continues moving south with an overall net negative elevation through the second half of the ride into Angers. 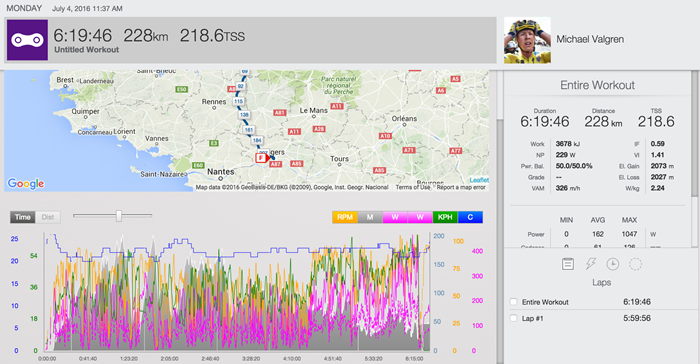 What better way to follow up the 2nd longest stage of the tour than with the year’s longest stage! Stage 4 starts in the historic town of Saumur and travels primarily SSE for 237.5 km ending in the city of Limoges. The course is flat through the first half then the gradient ticks up a notch before the sprint point at Le Dorat at 170 km and the only rated climb of the day a Category 4 Cote de la Maison Neuve at 182 km. The positive gradient continues to 210 km at Bonnac-la-Cote before riders get a primarily false flat downhill to the last straight 2k run into Limoges. 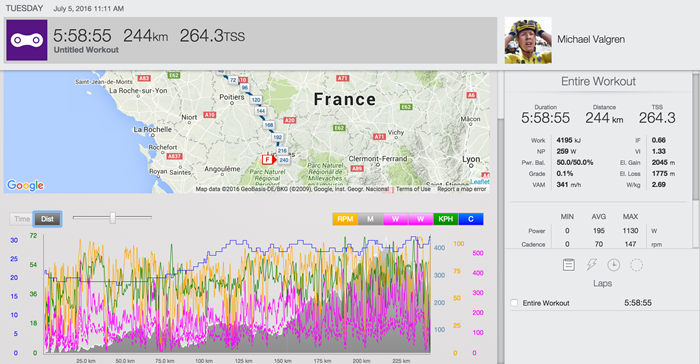 The first mountain stage of this year’s tour packs in a bit of everything. The stage is long at 216 km and features six categorized climbs. The course starts out in Limoges, where stage 3 finished and heads east to the early first category 4 climb up Côte de Saint-Léonard-de-Noblat. From there the course turns southeast and continues through rolling hills till it turns south at Saint-Angel. At 135 km the gradient starts to kick up with the run into the long near 4% gradient category 3 Côte du Puy Saint-Mary at 142.5 km. The intermediate sprint follows immediately after the first climb at 144.5 km. The road continues to climb to the second category 3 to Col de Neronne. There is a bit of rest descending down after the climb till the final push over the last 35 km of the race which faces two consecutive category 2 climbs up Pas de Peyrol and Col du Perthus followed by the category 3 climb up Col de Font de Cère. The course then descends into Le Lioran before the road kicks up again for the last km to the line.

After a day in the mid mountains the tour returns to a relatively flat stage. The first stage under 200 km in three days at 190.5 km, will be a welcome change for the riders. The course starts heading south out of Arpajon-sur-Cère for the first 32 km. The course then veers more southwest descending into Vieillevie. The first climb of the day is a category 3 climb on the Col des Estaques at 62 km. The road continues on a positive gradient up to the category 4 climb up Côte d’Aubin at 71.5 km. The intermediate sprint comes as riders crest over some smaller non categorized climbs at Montbazens 77.5 km into the race. The remainder of the stage is a net negative gradient but has a couple of non categorized climbs and the category 3 climb up Côte de Saint-Antonin-Noble-Val at 149 km. The finish into Montauban is slightly downhill and riders will contend with a roundabout and two turns in the last 1.5 km.

Welcome to the Pyrenees! This year’s tour hits these mountain stages early which will test the riders over the next three stages. This first stage starts in the town of L’Isle-Jourdain and travels southwest on a slow steady false flat incline to Boulogne-sur-Gesse at 50 km into the race. From there the course turns west through rolling hills before making the turn south at Chelle-Debat at 90 km. Riders will then prepare for the first of two categorized climbs on the day the long but lower grade category 4 climb up Côte de Capvern at 117 km. Sprinters will vie for the intermediate point right before the gradient really kicks up for the category 1 climb up the famous Col d’Aspin, a 12 km 6.5% gradient beast. The stage however does not finish with a mountain summit as riders will have a 5 km descent with some switch backs that could bring the GC riders all together before the last 700 meters of slight 3.5% uphill to the finish at Lac de Payolle.

Stage 8 will have 4 difficult categorized climbs over the 184 km course. The race kicks off in Pau heading southeast out of town and turns east at Luz-Saint-Sauveur where the road starts to get steeper as the riders approach the Col du Tourmalet. This is a 19 km climb at 7.4% average grade Hors Categorie (HC) climb that starts around 67 km. Then an 18 km descent through the town of Sainte-Marie de Campan. The incline towards the category 2 climb up Hourquette d’Ancizan starts immediately on the way out of town. While only 4.9% grade at 8.2 km long, the climb will keep the pressure on. The descent features narrow steep roads into Guchen and on to the category 1 Col de Val Louron-Azet. The descent off of this climb has a series of 10 switchbacks on the way into Loudenvielle. The final category 1 climb before the run into Bagnères-de-Luchon is the Col de Peyresourde, which at only 7.1 km long has an average gradient of 7.8%. The descent into the finish is much less technical and flattens out over the last 4 km with several tight turns in the last km to the line. 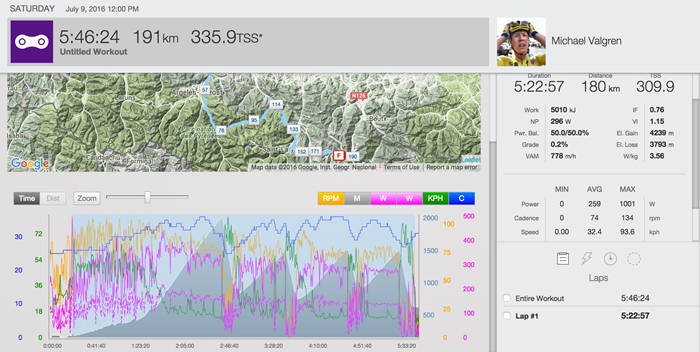 The last stage before the first rest day of the tour is also the final day in the Pyrenees. The tour has decided to test the riders before they are allowed to relax for a day with three category 1 climbs, a category 2 climb and a mountain summit finish up the Hors Categorie Andorre Arcalis. Right from the beginning heading southeast out of the Spanish town of Vielha Val d’Aran riders will start the ascent up the Port de la Bonaigua. After a fast descent into Sort riders face the second category 1 climb up Port del Cantò. THis climb is not as steep as the first, but is longer at 19 km. The descent off the climb is a bit more technical, but the roads are wide and fast. As the course passes through Adrall it swings back north away from Spain and towards Andorra. The long sustained incline hits the intermediate sprint point just before the start of the category 2 climb of Côte de la Comella. Riders will almost immediately go into the Col de Beixalis with an average grade of 8.5% for 6.4 km. The final test will be up the HC Andorre Arcalis which features a series of 12 switchbacks in the last 5 km at an average grade of 7.5%. 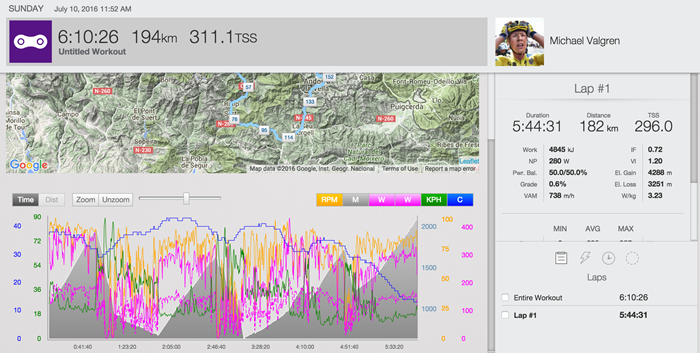