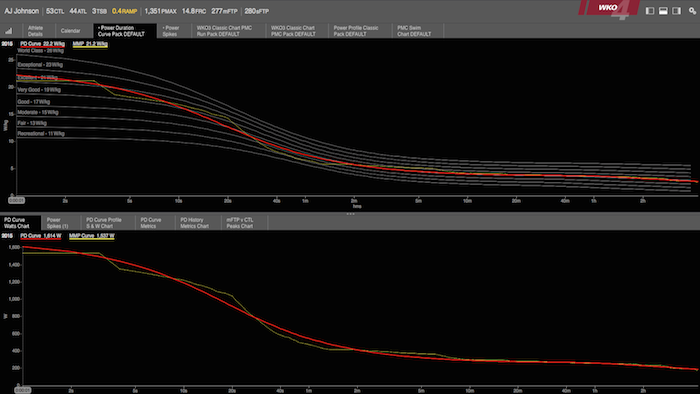 What Is Functional Threshold Power?

Knowing your Functional Threshold Power (FTP) is critical to accurately analyzing your workouts and seeing long term trends. While lab testing is the most accurate method to determine this, it is not feasible for many. A more convenient and possibly more accurate way of determining your FTP is therefore to simply rely on data collected using your power meter in the field.

For more than 30 years, exercise physiologists have known that the exercise intensity at which lactate begins to accumulate in a person’s blood, lactate threshold (LT), is a powerful predictor of their endurance performance ability. This is because although an individual’s cardiovascular fitness (VO2max) sets the upper limit to their rate of aerobic energy production, it is their LT that determines the percentage  of their VO2max that can they can utilize for any given period of time.

The physiological factors determining LT are complex, but in this context, blood lactate levels essentially serve as an indirect marker for biochemical events within exercising muscle. More specifically, a person’s LT reflects the ability of their muscles to match energy supply to energy demand, which in turn determines the fuel “mix” (carbohydrate vs. fat) used and the development of muscle fatigue. Consequently, LT, especially when expressed as a power output, which also takes into account cycling efficiency, is the single most important physiological determinant of performance in events ranging from as short as a 3 km pursuit to as long as a 3 week stage race. Just as importantly, because the metabolic strain experienced when exercising at a given intensity is dependent upon the power output relative to power at LT, this parameter provides a physiologically sound basis around which to design any power meter-based training program.

TrainingPeaks.com and TrainingPeaks WKO4 software explicitly recognizes the crucial importance of power at LT by allowing you to enter a value for your current Functional Threshold Power (FTP) and threshold heart rate. This value is then used to calculate the Intensity Factor® (IF®) and Training Stress Score® (TSS®) for every file you analyze.

In addition, WKO4 will use your threshold power to automatically calculate seven suggested training ranges, or levels. Alternatively, TrainingPeaks also allows to custom define your own power-based training levels.

So, how do you go about determining your threshold power? Obviously, one way is via laboratory testing with invasive blood sampling, but few people have access to such testing on a regular basis. In addition, power at LT as determined in this manner is often significantly below what athletes and coaches tend to think of as a “threshold”.

A more convenient and possibly more accurate way of determining your FTP is to rely on data collected using your power meter in the field. There are a number of different ways of doing so, each of which has its advantages and disadvantages, but all of which provide very similar estimates of your FTP. In order of increasing complexity, these are:

Since one goal of any training program is to increase power at threshold, the value you have entered into TrainingPeaks should be periodically reassessed to be certain it is still accurate. In particular, an IF of more than 1.05, meaning that NP is more than 5 percent greater than threshold power, during a 1 hour mass start race is often evidence that your threshold power is set too low.

How often threshold power will change significantly will depend in part on your training history and habits. For example, someone who is just beginning in and/or returning to cycling may see large and rapid changes in their threshold power, whereas an experienced rider who has been training for many years and/or an athlete who maintains a high level of conditioning year round will probably experience much less variation.

In general, assessing threshold power a few times per year (e.g., near the start of training as a baseline, partway through the pre-competition period to track improvement, and during the season to determine peak fitness achieved) is probably sufficient.

About Dr. Andrew Coggan, Ph.D.
Andrew R. Coggan, Ph.D., is an internationally recognized exercise physiologist. He has published numerous scientific articles on the physiological responses and adaptations to acute and chronic exercise in healthy untrained individuals, athletes, the elderly, and various patient populations. A former national-caliber masters cyclist and TT record holder, Dr. Coggan is also widely recognized as one of the leading experts on the use of power meters. He is the originator of numerous concepts/algorithms for analyzing the data that such devices provide, including normalized power, TSS, power profiling, quadrant analysis, the Performance Manager, the WKO4 power-duration model, auto-phenotyping, and unique pedaling metrics. In 2006, he was honored for these applied sports science efforts with USA Cycling's Sport Science Award and by being named as one of three Finalists for the US Olympic Committee's Doc Councilman Award.
#PRODUCT-EDUCATION#DATA-ANALYSIS-2