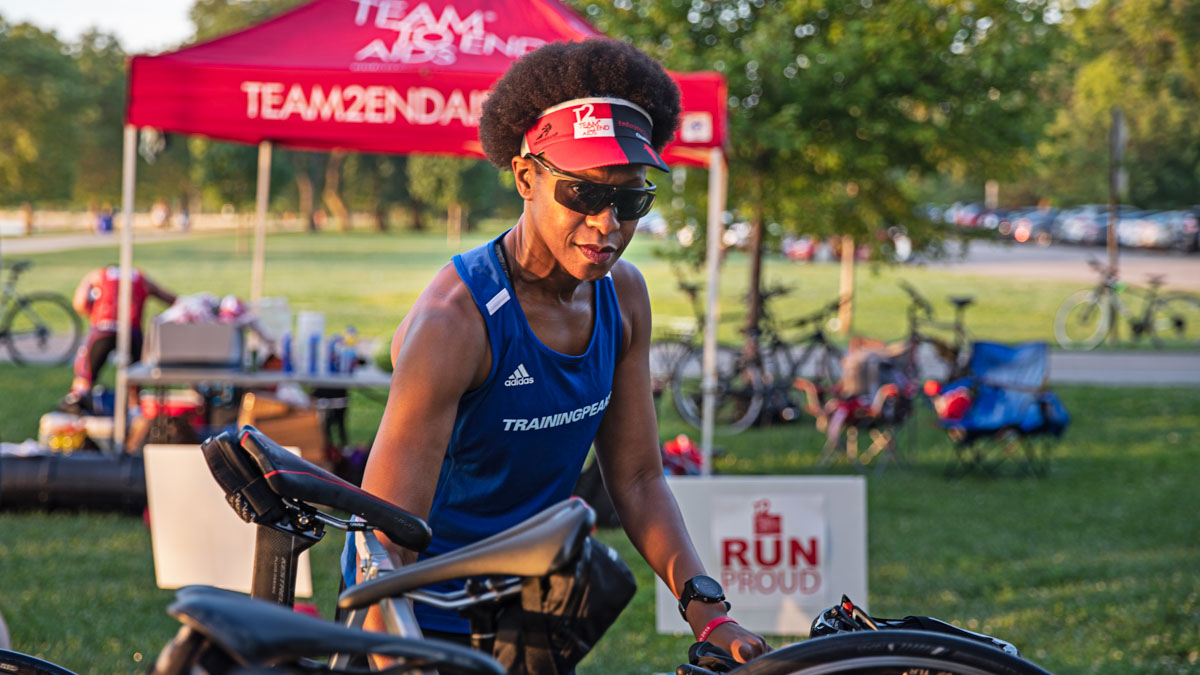 Joy Miles is a Pilates trainer and Endurance coach based in Chicago, Illinois. Here’s how she uses TrainingPeaks to help athletes of all backgrounds and abilities to reach their goals.

Joy Miles is a Pilates trainer and Endurance coach based in Chicago, Illinois. Among other clients, she works with the LGBTQ+ community and women of color to eliminate barriers to participation in Triathlon and other endurance pursuits. Here’s how she uses TrainingPeaks to help athletes of all backgrounds and abilities to reach their goals.

TrainingPeaks: How did you start coaching?

Joy Miles: I started coaching about 20 years ago, after I joined my first team. I joined because I didn’t know how to swim, and wanted to learn. The head coach saw that I was progressing a lot, so I started becoming an assistant coach. It was just a way of giving back to the community, but also bringing more women into the sport; more older women and women of color. Swimming is the biggest barrier to triathlon, so it was a way of giving back and being a role model.

And you were a personal trainer before that?

When I first started coaching I was working part-time in a gym while I worked in finance. When my job was eliminated, that was my opportunity to switch to fitness full time. From swimming I went to coaching marathons and becoming a USAT certified coach.

Can you tell me more about the team?

It’s called Team Dream, and our main goal is empowering women of color in learning how to swim. It’s essentially learning a life skill, but that leads to some of them wanting to do a triathlon or a swim race or something outside their comfort zone. We have a few women who are competing in the senior games in Albuquerque New Mexico, all in swimming!

Swimming is a whole different ball game when you’re dealing with women of color because it’s hair, it’s makeup, it’s fake eyelashes, it’s like “I’m going to die,” and I’m like, “no you’re not, you’re in three feet of water.” But I also have firsthand experience with that feeling; I come from a family where no one swims; my mother does not swim; my father does not swim, and I have cousins who will literally not get in the water.

So how do you talk your athletes through that?

It’s a whole bunch of “do you want to remain healthy?” I ask if it’s all about your vanity on the outside, or if you want to look as good on the outside as you feel inside. Honestly it ends up becoming a lot of real talk. Some will embrace it and others won’t, but a couple years later you’ll see them coming up again.

I guess you could just swim breaststroke, right?

You could, but the Pilates trainer in me sees people doing breaststroke with their head out of the water, and I’m like, “okay, what are you doing to your spine?!”

How have you seen this shift in mentality change peoples’ lives?

A couple years ago we had a triathlon clinic, and we did the fix-a-flat lesson and a mini brick, and all of a sudden I’m turning around like, “who’s smoking?” And it’s one of my athletes. He actually ended up quitting a few weeks later.

We’ve also had some people stop drinking, we’ve had people adopt more of a healthy eating lifestyle. Sometimes it’s just a healthier outlook in their work and relationships.

Do you think that’s a direct result of feeling empowered by sport?

Yes. We have a lot of folks who are in high-stress jobs; lawyers, writers, doctors, nurses, and sports, in general, have been their outlet. On our long runs, we’re basically solving the world’s problems. We’re talking about food, recipes, books, movies… On our last  20-miler, we were talking about Disney Princesses and what’s the best Pixar movie—we debated that one for like three miles!

Coco is the best Pixar movie, just bring a tissue.

It must be so rewarding as a coach to see people make those changes.

I love seeing them make their changes, but it’s also the sheer joy on their faces when they cross a finish line they didn’t think they could cross. One of our athletes was doing her third IRONMAN in Louisville. She had some setbacks last year so she brought along her best friend. They both crossed the finish line and just seeing that satisfaction was more than enough for me.

What’s the biggest challenge in coaching for you?

The biggest challenge is the type A+ personalities who want to do more than what they are prescribed. There is a reason for the training plan, there is a reason why we have this three-week build and this one-week recovery! Then there are the ones who need that little push, and I just let them know that I’m going to look at their TrainingPeaks to see that they do their workouts. If they can’t get to it, we talk through it and come up with a better plan for how we can make them successful.

I like how you frame that. How would you describe your coaching philosophy?

I meet everyone where they’re at. Everyone is a different level, and even if they don’t want to go in the deep end of a pool, that’s ok. We work a lot on visualization and trying not to panic or freak out, whatever it takes to make people at ease.

I try to be very encouraging and show them all the right parts of what they’re doing… my goal is to make everyone the best athlete they can be in their own skin.

I knew I didn’t want to be that type of coach who was like, “you need to go faster,” or “you need to go harder.” I’m working with what I have to work with, and I try to be very encouraging and show them all the right parts of what they’re doing. They might think they’re slow, but slow is a relative term—my goal is to make everyone the best athlete they can be in their own skin, not necessarily what the media calls an athlete.

Just this past Sunday, I had a runner who finished the Chicago marathon saying, “I was never an athlete, but I moved this body across the finish line,” and that means a whole lot more to me than the person who was a Heisman Trophy winner or NCAA Champion.

As a woman of color, how did it feel to join a team of other women who share your experience?

It was a breath of fresh air. When I first started in triathlon and marathons, I trained with these two guys. We were at a race and I said, “let’s play the game where we count how many black people are here!” And there were only 5.

When you don’t see anyone who even reflects who you are, it’s daunting… as a woman of color it can feel like you have the whole weight of the world on you to succeed and to lift everyone up.

When you don’t see anyone who even reflects who you are, it’s daunting. If you see a lot of women that helps, but if you don’t see anyone who’s had the same experiences like you, as a woman of color it can feel like you have the whole weight of the world on you to succeed and to lift everyone up. In my very first IRONMAN I didn’t make the bike cutoff, but I spoke about it in my blog and a lot of people commented that they had no idea what was going through my head. When I came back and actually crossed the finish line, I think that really really motivated a lot of people.

I think there’s something really powerful and fascinating there. Sometimes just seeing someone like you doing something that you aspire to do makes it seem possible for you.

Right! I know I will never be Simone Biles because, well, number one I do not know how to do a cartwheel. But just seeing that, and seeing the next generation of triathletes and marathoners coming up, is just a wonderful thing.

How do you use TrainingPeaks with your athletes?

We actually walk our athletes through it, down to loading their training plan on their phone. It’s a really great tool for athletes who travel a lot—we will tweak their plan or we’ll say oh you’re overtraining, why did you do this extra work out? Are you cramming all your workouts in one day? And that’s where we have to reassess.

This year a few of our Runners got injured and we had to redirect their program and do a return to run or return the bike. Some of them were restricted with what they could and couldn’t do so we had to revamp their whole program just so they could feel successful at the start line.

What are your goals for your coaching business?

My goal is to fine-tune my coaching, and work more. I like working with beginners because I can see their progress from start to finish and everything in between. It helps remind you of what you went through.

We coordinate with Lifetime Tri for these open water swimming clinics. It’s one way to get folks not so nervous about the water, and then they have a little bit more success at the triathlon. In the three months that we have the clinics, you can see folks improve, and start to think about what they can do. Even if it’s just getting to the quarter-mile marker in lake Michigan.

I also want to bring more people into the world of triathlon, and even if it’s a duathlon, or a run-bike-run, or an aquabike. In November I’m doing the aquathlon, which is new territory for me—I’ve never done a swim-run race!

I love it! It’s much better than when I worked in corporate America. I’m helping people reach a goal, get better or feel better, and learn new skills. It’s my way of giving back to the sport, and helping where I can.

About Lydia Tanner
Lydia Tanner is the athlete content editor at TrainingPeaks. She was formerly an editor at Bicycling Magazine and contributor to Bike Magazine, Mountain Flyer, and RedBull. She is a two-time collegiate national champion in XC MTB, and raced the World Championships as a U23. She is perpetually curious about physiology and human performance.