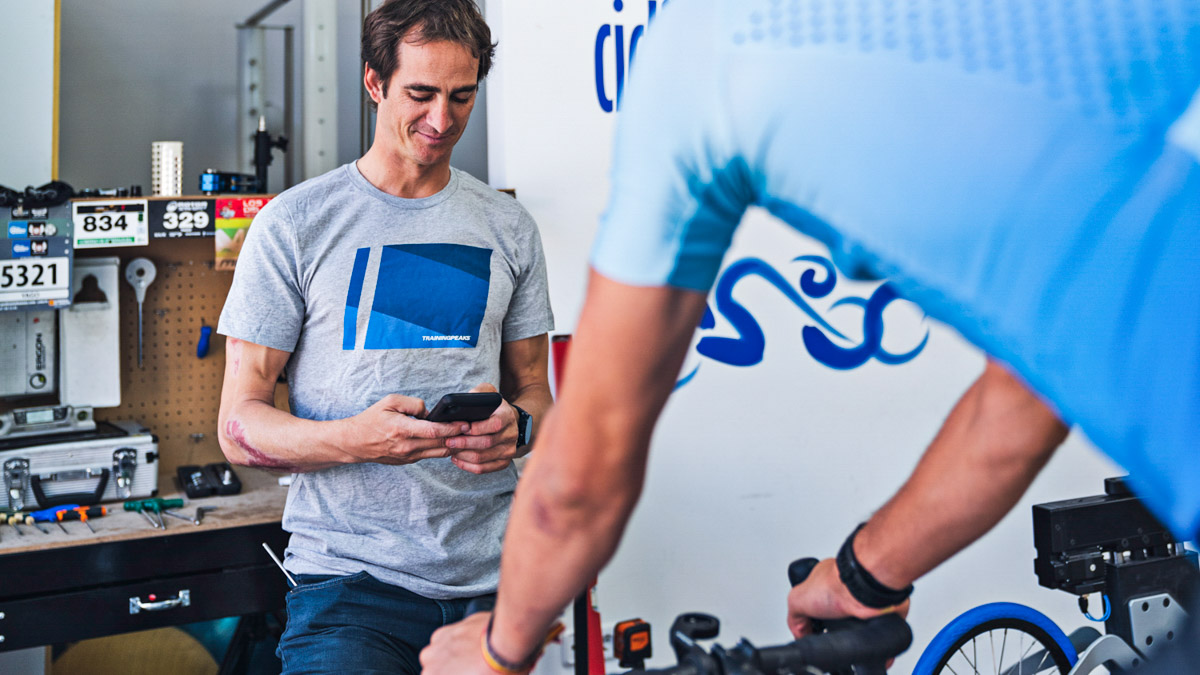 Making Your Indoor Cycling Setup Work for You﻿

What you need to consider when setting up an indoor cycling space.

Excerpted from Ride Inside: The Essential Guide to Get the Most Out of Indoor Cycling, Smart Trainers, Classes, and Apps by Joe Friel and Jim Rutberg, with permission of VeloPress.

The best-case scenario for riding indoors is to have a dedicated space where you can leave the trainer and associated equipment set up between rides. While there are some very motivated athletes who don’t let inconveniences deter them from completing their workout, having to drag the trainer, fans, bike, and more out from storage before every ride is too high a barrier for many. This process gets even more labor-intensive if you have to protect the floor or carpet from sweat or you need to reconfigure all the app-to-trainer-to-device connections each time.

When looking around your home for a space that will work, be sure it meets these absolute minimum requirements:

Technically, your bathroom or closet could meet these conditions, but that doesn’t mean they are good choices. Although you don’t need a lot of floorspace to create an effective indoor cycling setup, a larger or more open space is preferable for airflow.

Keeping cool is the number one priority for effective indoor cycling workouts. Heat production during exercise can be 15 times higher than the heat your body is producing right now at rest, but your core temperature can only increase by 3–4° F before the stress of hyperthermia diminishes power output and your brain dials down your motivation to continue.

Thermoregulation is how the body responds to heat. Two of the primary ways the body cools itself are through the evaporation of sweat and the gradient between skin and air temperature, both of which are heavily dependent on airflow. When you are riding outdoors, you have plenty of air flowing over your body as you move forward, but sometimes even that is not enough. For instance, riding in a headwind increases airflow over the body relative to your speed. On a hot day that is good because it increases cooling, but a headwind on a cold day can be unpleasantly frigid. The opposite is true with a tailwind. On a hot day a tailwind reduces airflow over your body, so while you may enjoy going faster, you also risk overheating. Riding indoors in relatively still air is the worst-case scenario.

What about riding in a cold environment with no fans, like an unheated garage in winter? It’s better than riding in a warm house with no fans, but you are dependent on the gradient between the temperature of your skin and the air around you. Initially, that gradient is big enough that you can dissipate a lot of heat. Pretty soon, however, you warm up a small pocket of air immediately surrounding your body and dissipate body heat more slowly. However, one benefit of training in a colder environment is that you can stay cool with fewer fans because moving cold air over your body dissipates heat faster than moving hot air over your body.

During strenuous exercise in a warm environment, an athlete can lose 1.5 liters of fluid per hour through sweating and respiration. Even if your sweat rate is far lower than that, there is likely to be some sweat on the floor when you are done with your indoor cycling workout. A bigger puddle of sweat is not a badge of honor; most times it means you did a poor job of creating enough airflow to facilitate evaporative cooling. Sweat that drips off your body carries with it far less heat than that same volume of fluid when it evaporates off your skin.

A fan is a good start, but to maximize evaporative cooling two or three are even better. There are three areas you really want to hit: head/face, front of body, and back. If you have one fan, aim for as much coverage as possible over your head and the front of your body. If you have two fans, aim one at your head and the other at your body. And if that’s not enough or you have access to a third fan, the most overlooked area for airflow is your back.

No matter how many fans you have, it is important to prioritize cooling your head and face. Thermal stress is a major limiter for athletic performance. In a 2011 study, 40 km time trial performance was nearly two minutes slower, and mean power output decreased by 6 percent when ambient temperature was 32° C compared to 17° C (90° F and 63° F, respectively), but it is not just a physical problem. The perception of thermal strain is enough to reduce time to exhaustion and reduce power output, potentially because it increases perceived exertion and reduces motivation. Some studies that have tested the perception of thermal strain applied menthol to athletes’ faces during time trial efforts. Even when neither skin temperature nor core temperature was affected, time trial pace or time to exhaustion improved. The menthol is thought to stimulate cold receptors in the skin to induce a cool feeling, which reduces the perception of effort and allows the athlete to continue working at a high intensity.

I am not suggesting indoor cyclists need to start rubbing menthol on their faces to get a good workout. The point is, a fan pointed at your face and head not only aids in evaporative cooling, but the sensation of your face feeling cooler plays a role in perceived effort and motivation to continue riding.

Move Away from Heat Sources or Turn the Heater Off

Depending on the time of year, air flowing from nearby HVAC vents could be good or bad. In the winter, you may find it unpleasant to have hot air pumping into a room where you are trying to stay cool. If it bothers you, consider closing heater vents or turning the heat off while you’re on the bike. In the summer, those same vents can be helpful if you also have central air conditioning.

As I mentioned when talking about airflow, it is likely sweat will accumulate on your bike and the floor during indoor cycling workouts. If you are setting up a training space in a room with carpet, it is a good idea to put a waterproof mat under the bike. When training in a room with a hard floor (concrete, hardwood, laminate, tile), you can still use a waterproof mat if you’d like, but an absorbent towel/rag will also work and reduce cleaning time. Just don’t leave a wet towel or puddle of sweat on a hardwood floor.

If you really want to make yourself unpopular in an apartment building, ride a trainer or rollers on a bare floor with the television volume cranked and two or three fans running. Oh, and ride at either 4:30 a.m. or 9:00 p.m.

Indoor cycling can be very noisy, but there are ways to make it quieter and less irritating to your family or neighbors.

Keep in mind, depending on the devices and apps you are using, there may be restrictions on the number of Bluetooth connections that can be supported simultaneously. Different combinations of trainers, sensors, and apps have unique setup methods, but thankfully once you have your setup dialed in, the connection process should be quick.

You may need to consider a device to extend the range of your household Wi-Fi. Many people set up their indoor cycling space in a basement, garage, or extra bedroom, which can be far from the Wi-Fi router. A strong internet connection is beneficial, particularly for streamed content and interactive trainer experiences like Zwift and Peloton. If a web-based app is controlling your smart trainer and the connection drops, it can be very disruptive to your workout.

When you ride outside on the road or trail, stopping and putting a foot down is pretty normal. Yet, some cyclists and triathletes have a perception that riding inside has to be nonstop. It doesn’t. There’s nothing wrong with hopping off the bike for a minute to fill a water bottle, use the bathroom, stretch, or just take some time off the saddle. However, if you are participating in a virtual group ride or indoor cycling class or competing in an e-race, you might not want to get off the bike at all. When selecting and setting up your trainer space, it is helpful to have a counter or table within reach.

Speaking of arranging your stuff, the location of the device you watch—television, laptop screen, smartphone—can make a big difference in terms of comfort and performance. The ideal scenario is that your cycling position indoors is the same as your cycling position outdoors. (Whether you are using the same bicycle for both or have a dedicated indoor setup in addition to your outdoor bike, measurements like saddle height, handlebar height, and reach should be the same.) What many cyclists overlook, however, is how the position of the screen or screens they are watching affect the riding position. When you are outside, you are looking forward and keeping your neck in a position that’s comfortable enough to maintain. What we see when riders move indoors is that screens positioned for watching television and movies are too high for a cyclist to see in their normal cycling position. You end up sitting up higher and craning your neck to watch the screen, which is not only uncomfortable but changes your biomechanics on the bike.

To position your data and entertainment screens, start by riding the bike in your training space using as natural a cycling position as possible—like you’re outside. Then put your screens at the height that corresponds with your normal field of vision in your outdoor cycling position. Just as you keep your eyes on the road or trail, perhaps the screen will sit a little lower than handlebar height so your line of vision is similarly angled.

About Joe Friel
Joe Friel is the author of The Triathlete's Training Bible, Your Best Triathlon and other books on training. For more information visit his website at www.joefrielsblog.com. You can also view and purchase Joe's training plans on TrainingPeaks.
Visit Joe Friel's Coach Profile